The Supreme Court’s verdict on the Rafale deal spurred a war of words between the BJP and the Congress. 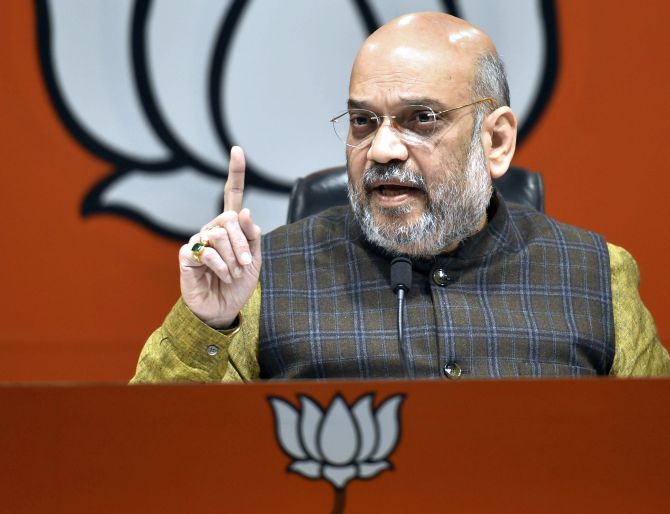 IMAGE: BJP president Amit Shah hit out at Rahul Gandhi for taking a jibe at Prime Minister Narendra Modi by saying the “chowkidar” is a thief. Photograph: Arun Sharma/PTI Photo

Buoyed by the Supreme Court dismissing all petitions asking for a probe into the Rafale deal, Bharatiya Janata Party president Amit Shah on Friday said the order is a slap on Congress chief Rahul Gandhi’s politics of lies and asked him to apologise to the country and its soldiers for putting national security at risk.

There is no occasion to doubt the decision-making process in the procurement of 36 Rafale jets from France, the court said on Friday. It is not the job of the court to deal with the comparative details of the pricing, it stated.

Shah asserted that the apex court order “exposes” the campaign of misinformation of the Congress chief.

Stating that his party was ready for discussion on this issue, Shah challenged the Congress to debate the issue in Parliament.

“I welcome SC order on Rafale. The truth has won. An attempt was made to mislead people using lies. Rahul Gandhi should apologise to the nation and the Army. He has put the national security at risk,” Shah said at a press conference at the party office here.

He also hit out at Gandhi for taking a jibe at Prime Minister Narendra Modi by saying the “chowkidar” is a thief. “All thieves had gathered to call the ‘chowkidar’ a thief, but the country never believed it,” Shah told reporters.

For the sake of his own credibility, Gandhi should reveal the source of information on which he based his false allegations on the Rafale deal, Shah said.

He added that the Supreme Court has also made it clear that there is nothing wrong with the offset partner.

Earlier in the day, Shah addressed the issue in series of tweets, saying the court didn’t find anything wrong with the process nor did it find any commercial favouritism in the deal.

“On the contrary, the SC held that govt had no role in selecting offset partners & found no merit in the demand for a probe based on mere perception of individuals,” he said.

“Truth always triumphs! Court’s judgment on the Rafale deal exposes the campaign of misinformation spearheaded by Congress President for political gains,” he added on Twitter.

The apex court’s order raises obvious questions on the motive of those working to discredit the deal, which is important for India, he asserted.

Earlier in the day, BJP spokesperson Shahnawaz Hussain said, “Every deal is not Bofors deal.”

“It is the culture and tradition of Congress and its top leadership to mint money from such deals on the cost of country’s national security,” he said.

Rahul Gandhi and the Congress should apologise to Prime Minister Narendra Modi for making false allegations against him and questioning his credibility, he added.

The Congress on Friday said the Supreme Court has vindicated its stand that “corruption” in the Rafale fighter jet deal cannot be decided by it and challenged Prime Minister Narendra Modi and his government for a Joint Parliamentary Committee probe into the deal.

Congress chief spokesperson Randeep Surjewala said the Congress had stated earlier that the Rafale issue cannot be decided by the Supreme Court, and the alleged corruption in the defence contract can only be brought out by a JPC after examining the files and notings in the contract.

Surjewala said the only forum that can probe the corruption in the Rafale contract after examining the pricing process and sovereign guarantee is the JPC.

“If they have nothing to hide, I challenge Modi ji and his government to submit to a JPC probe which will question and go into the corruption in the defence deal,” he said.

“We again challenge the prime minister for a JPC probe to unveil every layer of corruption in the deal,” he said, alleging that corruption has been “guided by the highest echelons of power”.

The Congress leader also alleged that the government gave a “one-sided half-baked information to the Supreme Court which has not been scrutinised by anyone”.

Surjewala said the Congress has maintained from day-one that it wants a JPC probe and the government should agree to it if it has nothing to hide.