The situation in Ramanathapuram district is slowly returning to normal after being marred by violence leading to the police firing on a stone-pelting mob at Paramakudi, which claimed seven lives.

"The situation in most parts of the district is peaceful, a holiday has been declared for all educational institutions in the district," Collector N Arun Roy told PTI.

Prohibitory orders are still in force, he added.

With two more persons succumbing to injuries at a hospital late on Sunday night, the toll in the firing rose to seven.

In Chennai, Chief Minister Jayalalithaa told the state assembly that a retired high court judge would probe the firing incident which, she indicated, could have been the culmination of communal tension.

"Some of you (opposition members) who spoke here said it was not communal violence. If that is the case, we are also happy. But the fact is that derogatory remarks were written on a wall in Mandalamanickam pacheri village (Ramanathapuram district) against Pasumpon Muthuramalinga Thevar (a highly respected nationalist leader)," she said.

"Following this, a Class 11 student Palanikumar from the village was killed on September 9. Then (Dalit leader) John Pandian leaves (to pay homage on the death anniversary of Dalit leader Imanuel Sekaran) and violence breaks out. Therefore, all these incidents have happened in an inter-connected chain-like fashion," she said.

In the wake of the boy's killing, the Ramanathapuram collector had banned the entry of Pandian into the district as the situation there was tense, Jayalalithaa said, adding that despite the order, Pandian proceeded towards Paramakudi, following which he was arrested at Tuticorin.

Thirty buses and 15 police vehicles had been damaged in the violence which broke out on Sunday after news spread that Pandian had been arrested en route to Paramakudi to pay homage to Sekaran on his death anniversary.

Police burst tear gas shells and initiated lathicharge on people before firing at the stone-pelting crowd. Several people and police officials, including Deputy Inspector General Sandeep Mittal, were injured in the stone pelting.

The police also fired to quell violence in Madurai, in which two persons were injured.

Fifty seven people were arrested in Tirumangalam and more than 50 in Paramakudi for indulging in violence, said the police.

Jayalalithaa had defended the police action on Sunday, saying they were forced to open fire as the protesters attacked police personnel on duty. She also blamed some people for instigating the violence "for their own political gains."

"The protesters indulged in large-scale violence and torched police vehicles. The police opened fire in self defence and to protect public property," said Jayalalithaa, who announced Rs one lakh compensation to the next of kin of those killed.

Referring to the death of the student Palanikumar in a "brutal attack," Jayalalithaa said five persons had been arrested in connection with the incident.

The chief minister said she had directed the police department to initiate due legal action in the case besides announcing Rs one lakh relief to his kin.

Earlier, members of different parties, who spoke on the motion, criticised the police and insisted that the men in uniform should have exercised restraint.

Deputy leader of Desiya Murpokku Dravida Kazhagam S Ramachandran said that the incident could have been avoided if John Pandian had cooperated with the police and not proceeded towards Paramakudi. But he added that the police should have treaded cautiously

"Though we don't know what the situation there was," he added.

Meanwhile, Dravida Munnetra Kazhagam president M Karunanidhi said in a statement that had the police anticipated the situation and acted in advance, the casualty could have been averted.

He urged the ruling AIADMK to ensure that such incidents did not recur in the future. 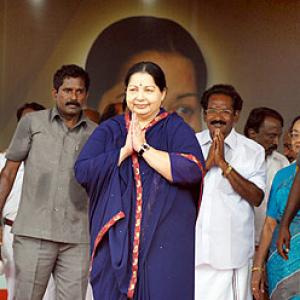