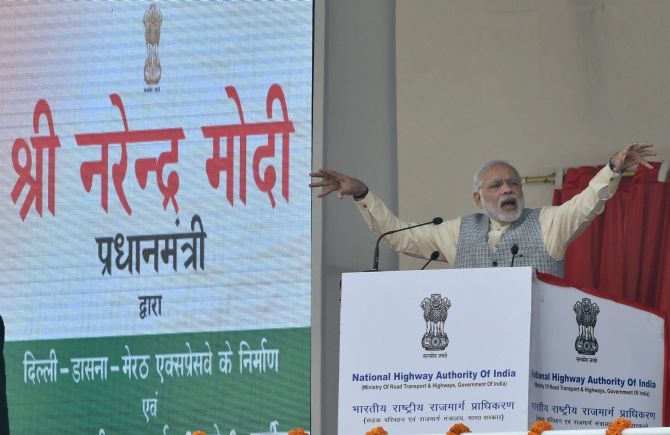 The decision to abolish interviews for Class-III and IV government jobs will come into effect from Friday, with Prime Minister Narendra Modi on Thursday describing it as a 'New Year gift'  which will 'free the youth from corruption'.

'From tomorrow, interviews for government jobs in Class-III and Class-IV categories will be abolished,' Modi tweeted about the decision which will impact over 29 lakh central government posts. 'This will help curb corruption,' he said.

Modi's tweet came soon after he talked about the issue at an event in Noida, Uttar Pradesh while laying the foundation stone to a 14-lane expressway connecting Delhi with Meerut.

He said the government has taken a decision, which will be implemented from Friday, that there will be no interviews for Class-III and IV jobs.

"Interviews are seen as a means to get a job by using somebody's influence. And those deserving are deprived in the process. That is why the government has decided that from tomorrow, the New Year gift is that for Class-III and IV jobs, there will be no interview," the prime minister said.

"Through technology and on the basis of merit, if anybody deserves a job, the offer will reach his house," he said.

He said it is a 'major step' in the fight against corruption and the government’s effort to save the youth from problems they encounter while seeking jobs.

He appealed to all the chief ministers to take the same step and particularly urged Uttar Pradesh Chief Minister Akhilesh Yadav to put it into practice, noting that he himself is an MP from the state.

Modi had first talked about his intent to abolish interviews for lower level government jobs in his last Independence Day address, saying the practice breeds corruption and many poor people lose out in the process.

"One of the areas of corruption is recruitment. Even the poorest of the poor wants that his son should get a job," Modi had said from the Red Fort.

"I have not yet seen a psychologist who can assess a person in a two-minute interview," the prime minister had said.

Subsequently, in his 'Mann Ki Baat' radio programme on October 25, he had said that the government had completed the entire process to do away with interviews for lower rank jobs and it would be implemented from January 1, 2016.

Recently, the Department of Personnel and Training had said that skill test or physical test may continue as it is different from interview.

"However, these tests will only be of qualifying nature. Assessment will not be done on the basis of marks for such tests," it had said.

In case of specific posts where a ministry or department wants to continue with interview as a process of recruitment, a detailed proposal seeking exemption will have to be sent to the DoPT with the approval of the minister or minister in-charge.

The ministries have been asked to send a consolidated report to the DoPT by January 7 in this regard.

"Report so to be furnished with the approval of the minister or minister in-charge shall include the details of the name and number of posts where the interview is discontinued and posts for which the exemption has been sought within the purview of the administrative ministries or departments," the order said.