Congress president Rahul Gandhi on Friday demanded answers to questions raised by a media report that the Prime Minister's Office conducted parallel negotiations on the Rafale deal, saying it is now 'crystal clear' that the 'watchman' is the 'thief' as he ramped-up his attack on Prime Minister Narendra Modi. 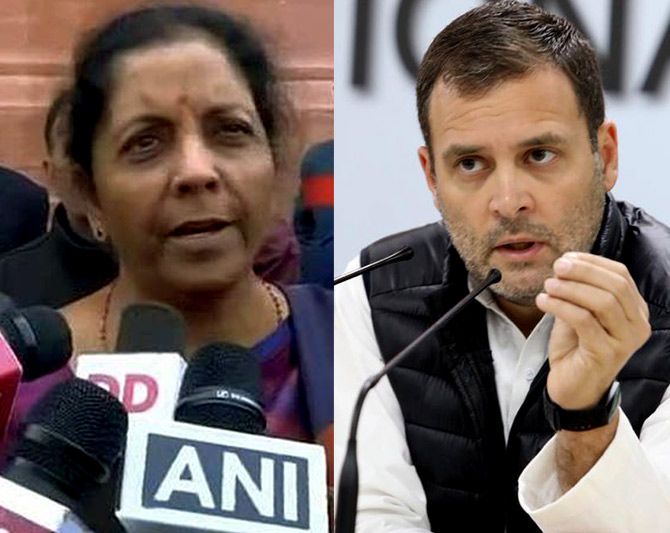 It is an open and shut case, Gandhi declared, citing a report in The Hindu newspaper claiming the Defence ministry raised strong objections to 'parallel discussions' conducted by the Prime Minister's Office during the negotiations over the Rs 59,000 crore Rafale fighter jet deal between India and France.

As the report drew fresh battle-lines with the Bharatiya Janata Party and its ministers terming Gandhi's allegations another 'lie from his lie manufacturing factory' and opposition leaders speaking out against the deal, the Congress president brought in his brother-in-law Robert Vadra and senior leader P Chidambaram to make his point.

He was responding to a question on the Enforcement Directorate interrogating Vadra in a money laundering case and the government's sanction to prosecute Chidambaram in the INX MEDIA case.

A day after the prime minister alleged that the Congress did not want the Indian Air Force to be strong, Gandhi said he wanted to address every member of the armed forces.

"It is absolutely clear that the prime minister has stolen Rs 30,000 crore of your money, bypassed a process, and given it to his friend Mr. Anil Ambani," he said.

The government, as well as Ambani, have strongly denied any wrongdoing in the fighter jet agreement with France.

"It has been proven now that the watchman (chowkidar) is the thief (chor). What can be more clear than this?" he asked, reiterating epithets he has used several times earlier.

Holding up the documents quoted in the newspaper, he said the defence ministry was clearly objecting to the interference.

Gandhi also read out from a 2015 note, purportedly from the defence ministry, published in the newspaper.

"Now, it is crystal clear that the ministry itself has said, and I will read it to you, 'It is therefore clear that the parallel discussions by the PMO has weakened the negotiation of the MOD and the Indian negotiating team.

"We may advise PMO that any officers who are not part of the negotiation team may refrain from having parallel parleys with the officer of the French government'," Gandhi said.

The Congress president also reiterated his demand for a joint parliamentary committee to probe the Rafale deal.

Defending the government in the Lok Sabha, Defence Minister Nirmala Sitharaman dismissed the media report, saying it was 'flogging a dead horse', and accused the opposition of playing into the hands of multinational companies and vested interests.

"They are flogging a dead horse. Periodical enquiries by the PMO cannot be construed as interference," the minister said in the Lok Sabha.

She said then defence minister Manohar Parrikar had replied to the letter asking the official to remain 'calm' as everything was 'alright'.

"The lie-manufacturing factory of Rahul Gandhi continues to operate and he has served us yet another lie," he said, demanding that Gandhi should tell them which aircraft company officials he met during his recent visit to Europe.

Former defence minister and senior Congress A K Antony said it was 'shocking' that the PMO was conducting parallel negotiations and alleged it had 'special interests to protect'.

"In defence negotiations, only the defence ministry is involved," the senior Congress leader told reporters.

Reacting to the report, Communist Party of India-Marxist general secretary Sitaram Yechury alleged that Modi had consistently undermined the Air Force and the Defence Ministry to benefit his "cronies" in the Rafale deal.

'His actions have hurt the public exchequer & damaged national security. These facts have been hidden from Supreme Court where a review petition is pending,' Yechury tweeted.

National Conference leader Omar Abdullah added that the purported Defence ministry note indicated that then defence minister Parrikar had no knowledge of the progress in negotiations for the deal.

'He had no direct knowledge of progress & passed the buck back to the PMO,' Abdullah said on Twitter.