Prime Minister Narendra Modi on Saturday slammed Pakistan over the Pulwama terror strike that claimed the lives of 40 Central Reserve Police Force personnel, and urged people to have patience and faith in
the security forces who have been given a free hand to punish the perpetrators of the attack. 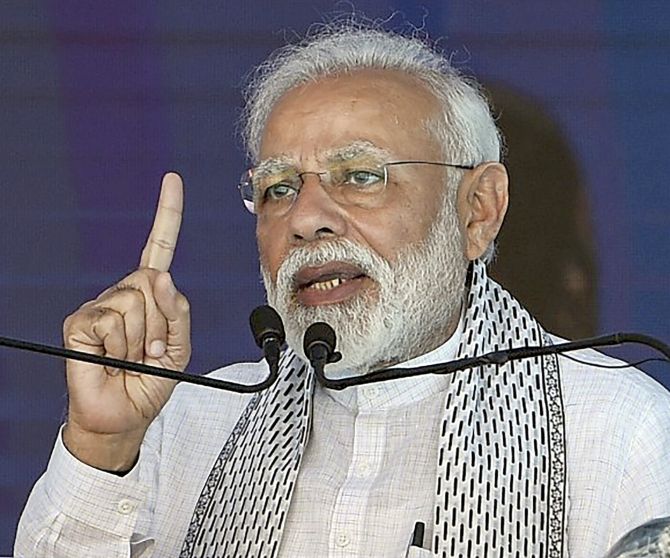 At a public function in Pandharkawada in Yavatmal district, where he launched a number of projects, Modi said Pakistan has become a synonym for terrorism.

"A nation which came into existence after Partition and encourages terror activities, and which is on the verge of bankruptcy, has now become the second name for terror," Modi said.

Asserting the country was in deep pain over what had happened in Pulwama, the prime minister said, "The sacrifice of the CRPF personnel martyred in Pulwama will not go in vain. Perpetrators of the crime will
be punished."

Forty CRPF personnel were killed and five injured in one of the deadliest terror attacks in Jammu and Kashmir on Thursday, when a Jaish-e-Mohammed suicide bomber rammed a vehicle carrying over 100 kg
of explosives into their bus in Pulwama district.

"All of us can feel the pain of families of the Pulwama martyrs. We understand your anger," Modi said.

At the event, the prime minister also dwelt on his government's development works. He recalled his visit to Dabhadi in Yavatmal district on March 20, 2014, for a 'chai pe charcha' programme.

"We had discussed the issues facing the country and promised to work to address all of them," Modi said, and asked those present at the event whether they were
happy with the work and the efforts he was making.

"I have worked sincerely to fulfil the assurances," he said.

"The money will be given in three instalments," he said.

Asserting that people had voted for a strong government four-and-a-half years ago, Modi said, "It is because of your vote that the government could work with clean intentions. If there was a mistake from your end, we would have remained where we were."

"I hope you would strengthen the trust shown in development and I appeal to you to bless your 'pradhan sevak'."

He said the Centre was working towards improving the standard of living of the tribals, and steps like providing medical facilities to tackle the sickle cell disease, development of sports facilities in tribal areas were being taken.

At the beginning of the event, a two-minute silence was observed to pay homage to the Pulwama attack victims. Union ministers Nitin Gadkaria and Hansraj Ahir, Maharashtra chief minister Devendra Fadnavis
and Governor Ch Vidyasagar Rao were also present.

During the programme, the prime minister inaugurated an Eklavya Model Residential School for tribal students and handed over the keys of houses constructed under the Pradhan Mantri Awas Yojana to some of the beneficiaries.