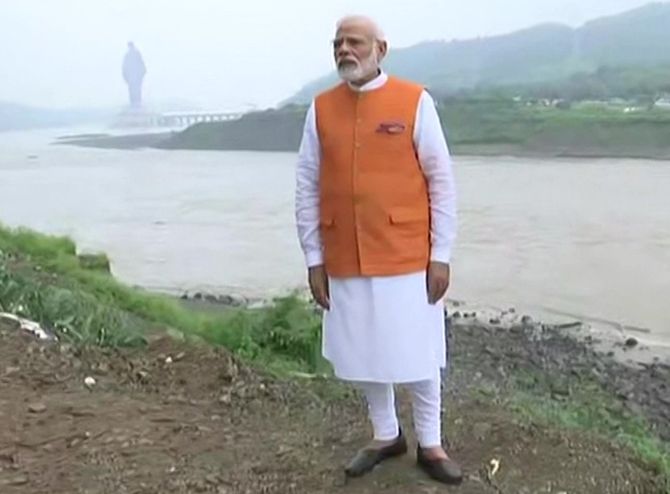 IMAGE: Prime Minister Narendra Modi at the Sardar Sarovar dam site. The Statue of Unity is visible behind him. Photograph: ANI

In his message, Naidu said the nation is making steady progress under Modi's able leadership.

Shah described Modi as a leader with strong willpower and a symbol of decisive leadership and hard work.

'Under your leadership, an emerging India has made a mark in the world as a strong, safe and reliable nation,' Shah said on Twitter.

Singh said the prime minister has been instrumental in building and strengthening India's position in the comity of nations. 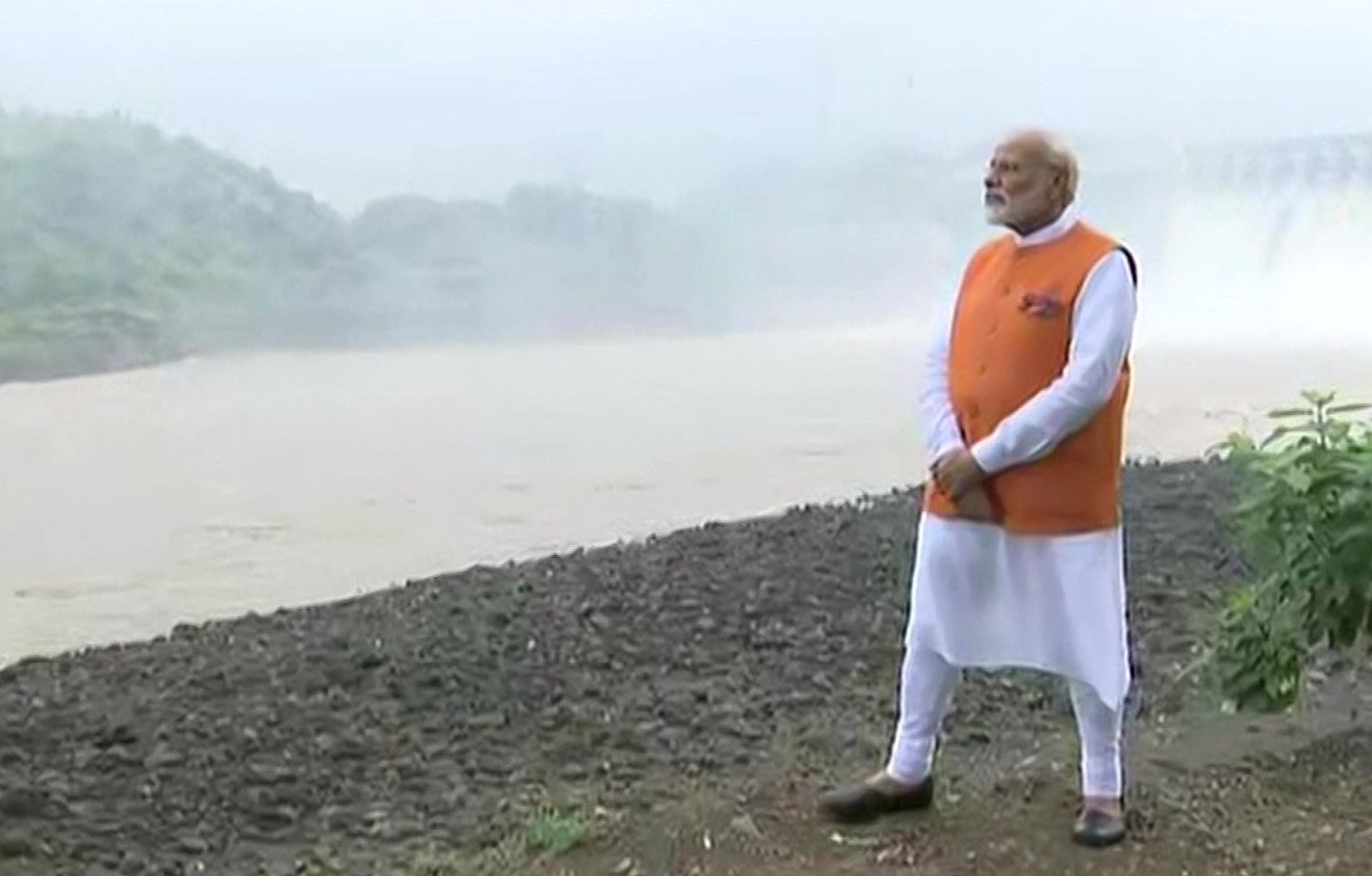 'His visionary leadership has helped India in scaling new heights of glory. I pray for his good health and long life,' the defence ministry tweeted.

Modi has a packed schedule and will spend most part of the day in Gujarat.

He began the day with a visit to the Statue of Unity and the Sardar Sarovar Dam on the river Narmada in his home state of Gujarat.

The Statue of Unity, billed as the tallest in the world, was inaugurated by him on Sardar Vallabhbhai Patel's birth anniversary on October 31 last year.

There were reports that he filmed a video of the Statue of Unity from his helicopter.

Earlier on Tuesday, Modi arrived at Kevadiya to take part in the 'Namami Narmada' festival being celebrated by the Gujarat government to mark the filling up of the Sardar Sarovar Dam on Narmada river to its full reservoir level of 138.68 metres.

For the first time since the height of the dam was raised in 2017, the water level reached its highest peak at 138.68 metres on Sunday evening.

Modi along with Chief Minister Vijay Rupani would perform 'pooja' at the dam site to 'welcome' the water of river Narmada, the lifeline of Gujarat. 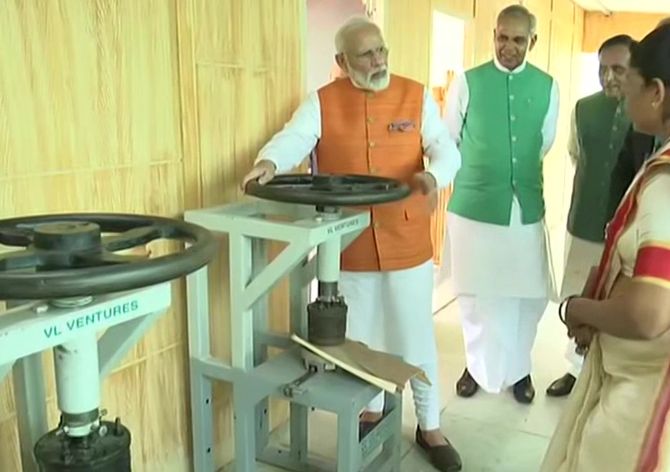 IMAGE: Modi at the Ekta Nursery, situated in the vicinity of the Statue of Unity. Photograph: ANI

The PM, who would be addressing a gathering near the dam, visited various developmental projects being carried out near the dam and Statue of Unity to boost tourism.

These projects include river rafting, a jungle safari park, a butterfly park and Ekta Nursery, an officila said.

Modi is also expected to visit Dutt Mandir at nearby Garudeshwar village on the banks of Narmada.

On his 68th birthday last year, Modi was in his Lok Sabha constituency of Varanasi with school children.

He visited a primary school and celebrated his birthday with students. He later offered prayers at the Kashi Vishwanath temple there.

PM's supporters and well-wishers flooded the social media with their best wishes, leading to seven different Twitter hashtags related to his birthday making it to the top 10 India trends on the micro-blogging site.

While #happybirthdaynarendramodi topped the chart in the India trends with biggies like Amul using the hashtag to mark the special day, #HappyBirthdayPM and #ShriNarendraModi was trending on 2nd and 5th positions respectively.

In less than an hour, seven of the top 10 India trends were fuelled by wishes pouring in for Prime Minister Modi from different quarters.

A large number of individuals expressed their warm wishes for the prime minister with many hailing him for his different achievements.

People from Ahmedabad gave a warm welcome to Modi on his arrival in the city on Monday night.

Outside the airport, the atmosphere was euphoric with people raising slogans and cheering for the Prime Minister.

PM Modi also acknowledged his supporters and waved at them from the front seat of his vehicle. 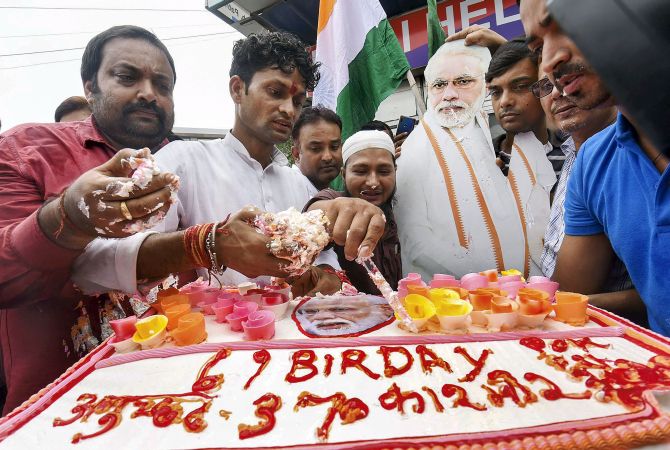 In Varanasi, an ardent fan of the PM offered a gold crown weighing 1.25 kg to Lord Hanuman at Sankat Mochan Temple to mark Modi's birthday.

Ahead of the PM's arrival on his birthday, the entire Sardar Sarovar Dam at Kevadia in Narmada district of Gujarat was illuminated with bright coloured lighting on late Monday night.

The PM, who arrived in Ahmedabad on Monday, is scheduled to visit the dam on Tuesday morning.

Speaking to ANI about the prime minister's visit, a priest told that he will also be performing 'pooja' at the Narmada river.

"We all are very excited about his visit. He will first perform aarti and pooja at Narmada river where he will perform all rituals to pay respect to the sacred river. This is for the fourth time I will make him perform pooja," the priest said.

Till late night Monday, several arrangements were being made to welcome Modi at the dam site.

The entrance of the dam area is being decorated with flowers and other materials.

While Modi is celebrating his birthday in Gujarat, different events are being organised in parts of the country to mark the day.

In Andhra Pradesh's Vijayawada, an exhibition to portray his life was organised on Monday.

"Here we are showing a life sketch of PM Modi's life. All schemes of his government, which were delivered for the upliftment of poor and needy people of this country are being shown in the exhibition," an organiser said.

"Every unit of BJP will display this kind of exhibition in every mandal of this country. BJP leaders will indulge in several welfare services like providing free medical and health checkup camp, going to hospitals, distributing fruits to patients, awareness on plastic ban, Swacch Bharat etc. The prime minister has dedicated his life to the nation," he added.

The BJP is celebrating Modi's birthday as 'Seva Saptah' starting September 14 to September 20.

The party has announced that several social initiatives will be undertaken by the party leaders across the nation during this week-long period. 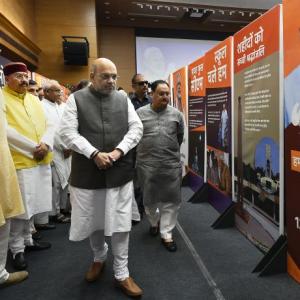