Congress leader Rahul Gandhi on Friday again accused Prime Minister Narendra Modi of having 'insulted' the soldiers with his comment that nobody had intruded into Indian territory in Ladakh, and demanded that he tell the country when will the Chinese 'be thrown out'. 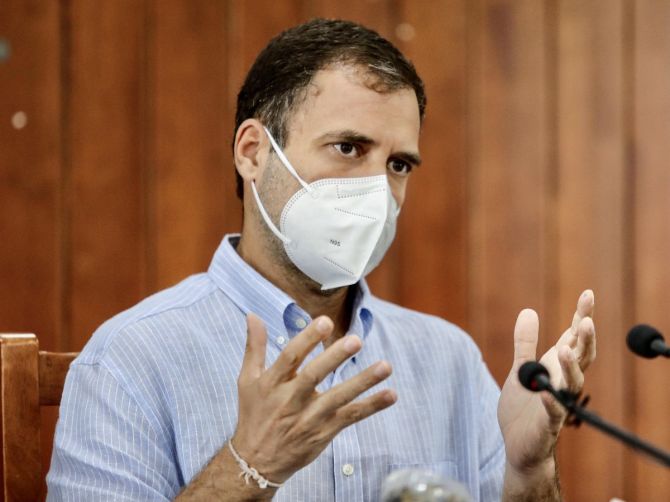 Addressing his first rally during the Bihar assembly elections, Gandhi insisted the Chinese army had indeed intruded into Indian territory.

"They have seized 1,200 km of our land. But when the Chinese army intruded, why did our prime minister insult our soldiers by saying that nobody entered into the Indian side?" he said.

Earlier in the day, Modi also addressed his first poll rally in Bihar and referred to the Galwan Valley clash with Chinese troops and said the sons of Bihar laid down their lives for the tricolour but did not let 'Mother India bow her head'.

"The question is, Modi ji, when will you throw out the Chinese soldiers sitting in our territory," Gandhi said.

He also attacked the Centre over the migrant crisis triggered by the pandemic-induced lockdown, alleging when workers from Bihar were being 'chased away' from other states the prime minister did nothing to help them.

"He bows before the labourers but does not help them when they need it," he said.

He demanded that the prime minister tell Biharis how many jobs he gave them and when.

A huge gathering was seen at the Hisua rally venue, with people also crowding the roof a college building where it was held.

Rashtriya Janata Dal's Tejashwi Yadav, the chief ministerial candidate of the Mahagathbandhan, said the elections that were under way will not be fought on the issue of caste or religion but unemployment and poverty.