PM doesn't talk about unemployment in his speeches: Rahul

Congress leader Rahul Gandhi on Wednesday attacked Prime Minister Narendra Modi, saying he talks about other countries in his speeches but not about the problems facing India such as unemployment. 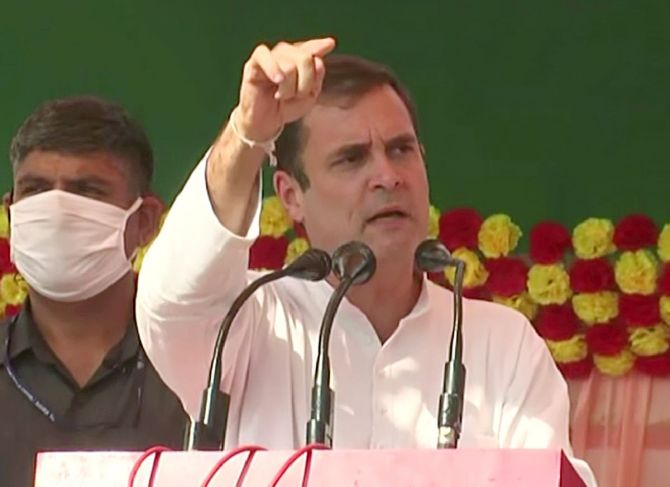 Gandhi, who arrived in West Champaran district for his second round of campaigning in the ongoing state elections, also attacked Bihar Chief Minister Nitish Kumar over unemployment and the issue of migration.

Addressing his rally at Valmiki Nagar, the former Congress president said he was pained to see that Prime Minister Modi's effigy was burnt in Punjab on the occasion of Dusshera, and added that it reflected the 'anger' of youths and farmers.

"Youths and farmers of Punjab and Bihar and youths of Uttar Pradesh are angry that our PM keeps making speeches with Bihar Chief Minister and talks about other countries, but not the problems confronting our country such as unemployment," he said.

He said the prime minister and the Bihar chief minister used to raise the issue of unemployment earlier but no longer now.

"Now, the PM does not say in his speeches that he would give two crore jobs. Because the people of Bihar have realised that he had lied.

"I can guarantee that if the PM comes today and promises two crore jobs to youths, perhaps the crowd would shoo him off, telling him that he had lied," Gandhi said.

The Congress knows how to run a country, how to stand with farmers and give employment, but 'we don't know how to lie', he said.

Criticising the Centre over the three recently passed farm laws, he said its 'pilot project' was implemented in Bihar in 2006 when the mandi system was abolished in the state.

"What Nitish Kumar did in Bihar in 2006, Narendra Modi is doing in Punjab, Haryana and across the country," Gandhi said.

The Congress has fielded Pravesh Kumar Mishra for the Valmiki Nagar Lok Sabha bye-election, while Rajesh Singh has been nominated for the assembly poll from there.

The by-poll to Valmiki Nagar Lok Sabha constituency has been necessitated due to death of Janata Dal-United MP Baidyanath Mahto.

Later in the day, Rahul Gandhi is scheduled to address a rally at Kusheswar Asthan in Darbhanga.