Leaders of 22 opposition parties met the Election Commission and demanded verification of VVPAT slips of randomly-selected polling stations before the counting of the votes. 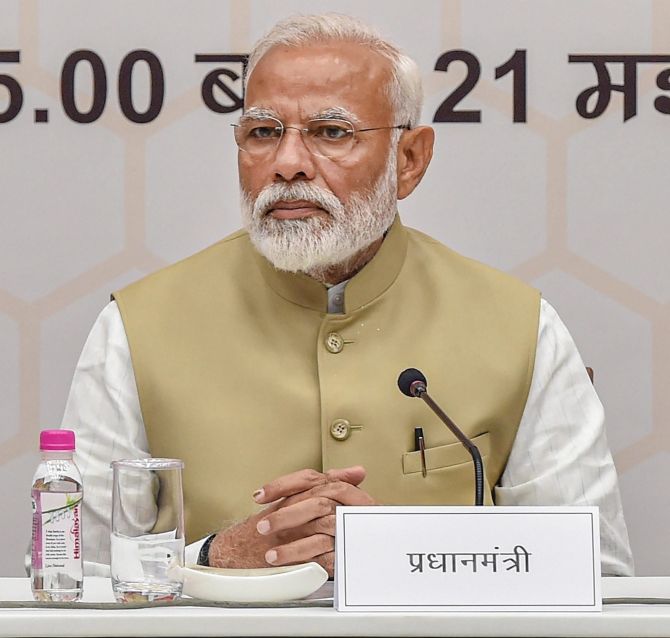 Prime Minister Narendra Modi on Tuesday expressed concern over the "needless controversy" created by the Opposition over electronic voting machines at a meeting of National Democratic Alliance leaders, even as the ruling alliance laid out its agenda for the next five years if it is elected to power again.

At the Bharatiya Janata Party-led ruling alliance meeting, which was attended by 36 parties, a resolution was passed, terming the 2019 general election decisive for the country and pledging to make India "strong, developed, prosperous and inclusive" by 2022, when India completes 75 years of its independence, party leader and Union minister Rajnath Singh told reporters.

The BJP-led NDA meeting is being seen as its show of strength and projection of a united front by the ruling alliance ahead of counting of votes on May 23, following which a new government will assume charge.

In his address, Modi stressed on the need to change the narrative from caste lines and orient it for the poor, Singh said.

Earlier on Tuesday, leaders of 22 opposition parties met the Election Commission and demanded verification of VVPAT slips of randomly-selected polling stations before the counting of the votes.

The opposition representation to the EC came barely two days before the counting of votes and after exit poll projections that the BJP-led NDA is likely to return to power.

Paswan, who joined Singh in the media briefing, too dismissed Opposition's protest over EVMs as a case of collective frustration over their impending defeat and also warned them of "tit for tat".

He did not elaborate what he meant by that.

Shah had hosted another meeting for Union ministers earlier on Tuesday.

The BJP described the meeting as an occasion to thank ministers for their service to the nation.

The NDA resolution also expressed its concern over the "systematic assault by the Opposition on institutions ranging from the CAG, Election Commission and judiciary to police and armed forces".

Modi described the NDA as an alliance of India's hope and aspirations, saying it has become an "organic entity" like a family and is representative of the country's regional aspirations.

The NDA leaders at the meeting, which was presided by Akali Dal patriarch Parkash Singh Badal, felicitated the prime minister and praised his council of ministers for their work.

The resolution expressed confidence that the NDA will come back to power under Modi and said its government planned a capital investment of Rs 100 lakh crore in infrastructure while Rs 25 lakh crore will be devoted to farm and rural sectors.

Hailing Modi's leadership and expressing faith in him, the resolution adopted by NDA leaders said their alliance is a true representative of India's diversity and dynamism.

"It is the alliance that manifests the dreams and aspirations of 130 crore Indians. Today, the NDA has become the principal pole in Indian politics.

"Under the leadership of PM Modi, the NDA government has future-proofed India, which means the creation of next-generation roads, railways, highways, i-ways and ports infrastructure that caters to the needs of the present and coming generations," it said.

The NDA, the resolution added, stands as a bulwark against the "vote-bank politics and old-school political thinking of the Opposition" whose 20th-century politics has not cut ice with the young voters of the 21st century.

"The last five years were about fulfilling the basic needs of the people; now is the time to further increase the pace of progress and meet the aspirations of the people," it said.

It also praised the outgoing government's development and welfare initiatives.

Singh said its work on the security and diplomatic fronts have ensured that India is no longer seen as a "soft state" by the world.

"We resolved that once again under the leadership of PM Modi, by 2022, when India marks 75 years of freedom, it is our endeavour to fulfil the dreams of our great freedom fighters and give shape to the strong, prosperous, developed and inclusive India they dreamt of," it said.

Besides representatives of 36 NDA constituents, Singh said leaders of three other parties also sent their letters of support at the alliance meeting.

'EVM activist Hari Prasad is a hero, not a thief'