A day after locking horns with Manmohan Singh during the Presidential Address debate, senior BJP leader L K Advani on  Thursday said the prime minister had breached Parliamentary propriety by making "false" claims that enhanced pension announced for army personnel had been met.

"Advani informed BJP MPs about PM's claim in Lok Sabha yesterday that the government had implemented its decision on enhancement of pension to JCOs and Jawans. No JCO or jawan has received any such orders. This is a very serious matter of Parliamentary impropriety," senior party leader M Venkaiah Naidu told reporters, quoting Advani.

Advani, who is chairman of BJP Parliamentary Party, was speaking at a meeting of the BJP MPs in New Delhi.

Manmohan Singh had intervened several times yesterday while Advani was replying to the Presidential Address in the Lok Sabha, including on the issue of enhancement of pension to ex-servicemen.

Advani had yesterday pointed to Singh's Independence Day speech in which he had referred to steps regarding the demand of ex servicemen relating to 'one rank one pay'.

Singh said whatever promises have been made were delivered by the Government and that Advani "should not create a rift between the Services and the Government". "Advani said that the Prime Minister should have studied the matter properly and then spoken on it. This impropriety should be taken seriously," Naidu said.

The government had earmarked Rs 2100 crore per year for the benefit of 12 lakh JCOs and jawans.

Advani praised his party MPs for their performance in Parliament on cornering the government on price rise. On the future strategy, he said the Kashmir issue and US "pressure" on India's foreign policy matters should be emphasised by BJP in Parliament.

"Advani said our complaints are not against the US but against our government's tendency to bow under international pressure. The Saghir Ahmed report on autonomy to Jammu and Kashmir gives the impression that the government will buckle under pressure," Naidu told reporters.

"The Central Statistical Survey figures show the five top-most states are BJP and NDA-ruled. Gujarat tops the list, followed by Bihar, Uttarakhand and Jharkhand. The fifth is Orissa," Naidu said.

The BJP maintained that it had not worked out any floor co-ordination with other opposition parties on taking on the government but had no problems in working with them.

On the proposed Women's Reservation Bill, likely to be tabled on March 8, Naidu said BJP would support the legislation, even though some NDA allies are opposed to it. 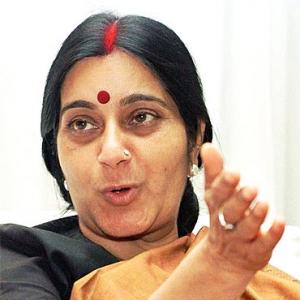