Winners of World Press Photo of the Year are truly incredible

A photo symbolising "love and compassion" of an 85-year-old Brazilian woman getting her first embrace in five months from a nurse through a transparent "hug curtain" has been named the World Press Photo of the Year.

This year, according to organisers, 74,470 images were submitted for judging, made by 4,315 photographers from 130 different countries.

World Press Photo has been kind enough to allow to share some of this year’s winning photos here with you.

The First Embrace
World Press Photo of the Year 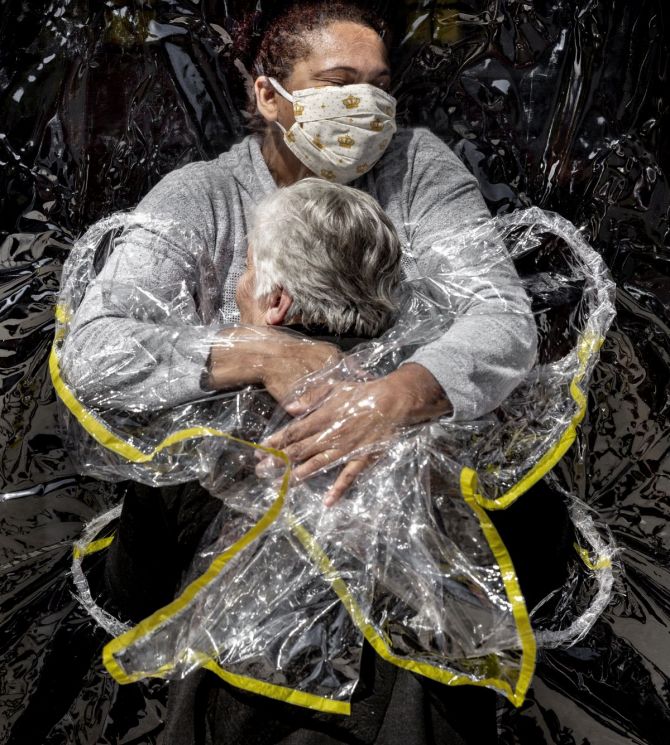 Rosa Luzia Lunardi, 85, is embraced by nurse Adriana Silva da Costa Souza, at Viva Bem care home, São Paulo, Brazil. This was the first hug Rosa had received in five months. In March, care homes across the country had closed their doors to all visitors as a result of the COVID-19 pandemic, preventing millions of Brazilians from visiting their elderly relatives. Carers were ordered to keep physical contact with the vulnerable to an absolute minimum. At Viva Bem, a simple invention, ‘The Hug Curtain', allowed people to hug each other once again. Photograph: Mads Nissen/Politiken/Panos Pictures/World Press Photo 2021 Marion 24, who has metastatic cancer, embraces her son Ethan, seven, in the presence of Peyo, a therapy horse, in the Séléne palliative care unit at the Centre Hospitalier de Calais in France on November 30 2020. ‘With Peyo, we try to recreate life at the end of life, in order to fight, and create an energy to accompany families and caregivers,’ says its owner, Hassen Bouchakour. Animal-assisted therapy is used in many clinical environments, especially psychological therapy and palliative care. Animals appear to be able to reduce anxiety and stress, and also to have physical effects, such as lowering blood pressure, improving heart rate, or helping in pain management. Photograph: Jeremy Lempin/World Press Photo 2021 An injured man stands near the site of a massive explosion in the port of Beirut, Lebanon, while firefighters work to put out the fires that engulfed the warehouses after the explosion. At about 6 pm on August 4 2020, the blast, caused by more than 2,750 tons of high-density ammonium nitrate, shook Lebanon’s capital. The explosive compound was being stored in a warehouse in the port. About 100,000 people lived within 1km of the warehouse. The explosion, which measured 3.3 on the Richter scale, damaged or destroyed about 6,000 buildings, killed at least 190 people, injured a further 6,000, and displaced as many as 300,000. Photograph: Lorenzo Tugnoli/Contrasto for The Washington Post/World Press Photo 2021 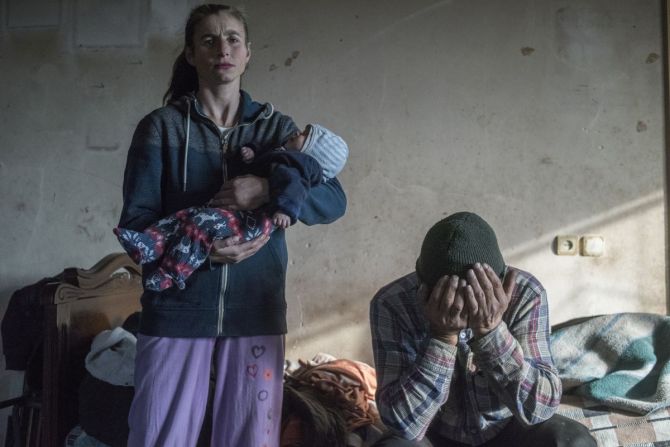 Azat Gevorkyan and his wife Anaik are pictured before leaving their home in Lachin, Nagorno-Karabakh, the final district to be returned to Azerbaijani control following the Second Nagorno-Karabakh War. Photograph: /Valery Melnikov/Sputnik/World Press Photo 2021 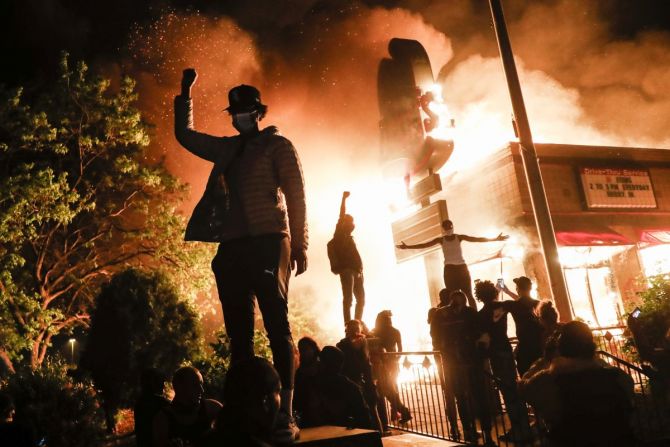 Protesters raise their fists in defiance outside a burning fast-food restaurant near the precinct station of the officers who arrested Floyd, in Minneapolis, Minnesota, USA. Photograph: John Minchillo/Associated Press/World Press Photo 2021 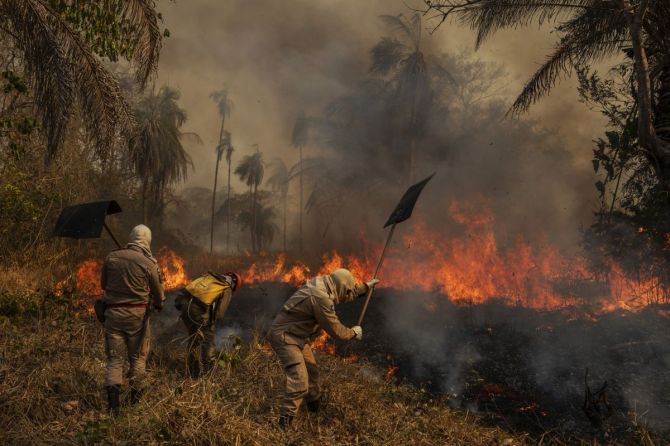 Firefighters combat a fire outbreak at the São Francisco de Perigara farm, which is home to one of the largest populations of Hyacinth macaws (Anodorhynchus hyacinthinus) in Brazil. About 92 per cent of the farm area, mostly dedicated to preservation, was destroyed by the fire. Photograph: Lalo de Almeida/Panos Pictures, for Folha de São Paulo/World Press Photo 2021 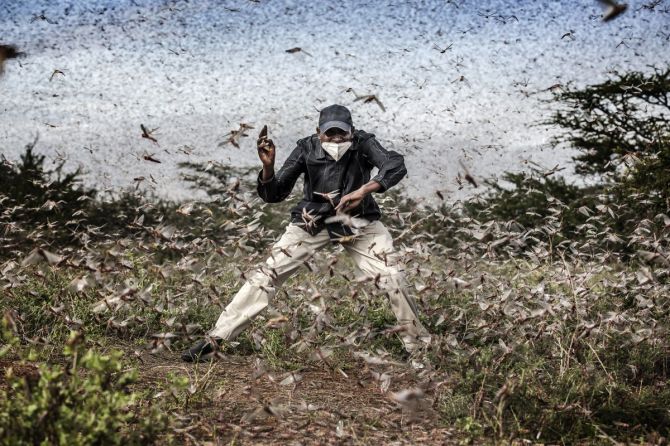 Henry Lenayasa, chief of the settlement of Archers Post, in Samburu County, Kenya, tries to scare away a massive swarm of locusts ravaging grazing area, on April 24. Locust swarms devastated large areas of land, just as the coronavirus outbreak had begun to disrupt livelihoods. In early 2020, Kenya experienced its worst infestation of desert locusts in 70 years. Swarms of locusts from the Arabian Peninsula had migrated into Ethiopia and Somalia in the summer of 2019. Continued successful breeding, together with heavy autumn rains and a rare late-season cyclone in December 2019, triggered another reproductive spasm. The locusts multiplied and invaded new areas in search of food, arriving in Kenya and spreading through other countries in eastern Africa. Photograph: Luis Tato for The Washington Post/World Press Photo 2021 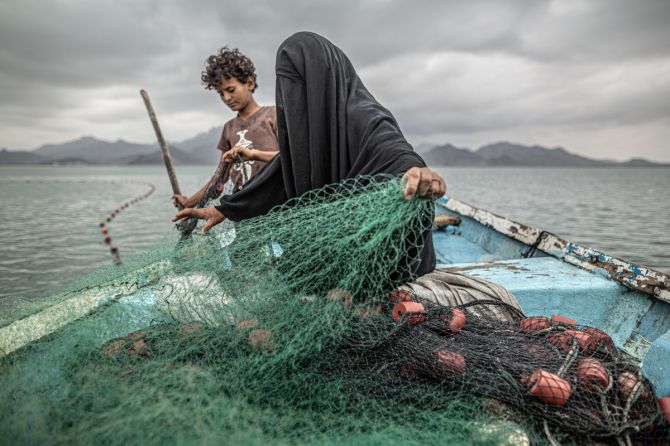 Fatima and her son prepare a fishing net on a boat in Khor Omeira bay, Yemen. Fatima has nine children. To provide for them, she makes a living from fishing. Although her village was devastated by armed conflict in Yemen, Fatima returned to resume her livelihood, buying a boat with money she earned selling fish. The conflict – between Houthi Shia Muslim rebels and a Sunni Arab coalition led by Saudi Arabia – dates from 2014, and has led to what Unicef has termed the world’s largest humanitarian crisis. Photograph: Pablo Tosco/World Press Photo 2021 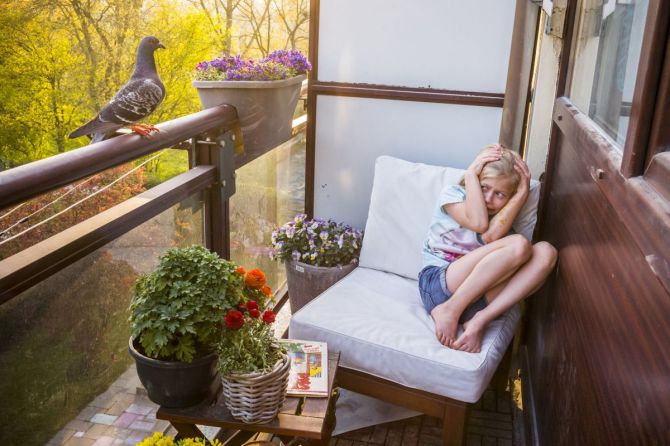 The photographer’s daughter Merel cowers after Dollie flies past and perches on the balcony, before entering the house, in Vlaardingen, the Netherlands. ‘She’s still frightened when Dollie suddenly lands on the balcony railing. I hide my smile behind the camera, as I try to comfort her by saying they won’t hurt you. “I thought he was going to attack me,” she replies. As the nesting pigeons keep coming back to our place, slowly my girls have started to appreciate them – perhaps not as much as I do, but it’s a start.' Photograph: Jasper Doest/World Press Photo 2021 A man and woman disagree on the removal of the Emancipation Memorial, in Lincoln Park, Washington DC, USA. The Emancipation Memorial shows Lincoln holding the Emancipation Proclamation in one hand, with his other hand over the head of a Black man in a loincloth, kneeling at his feet. The drive to remove the statue came amid a wave of calls to take down monuments of Confederate generals nationwide, a move largely welcomed by activists from the Black Lives Matter movement, who see Confederate and other such monuments as reminders of an oppressive history. Photograph: Evelyn Hockstein for The Washington Post/World Press Photo 2021

Those Who Stay Will Be Champions
1st Prize, Stories, Sports 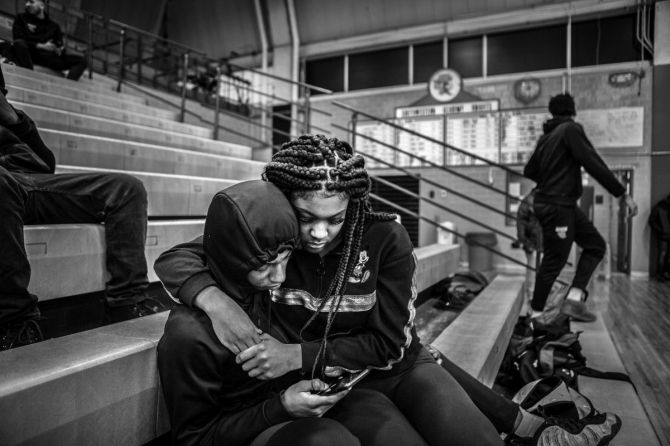 Jaguars junior Dion Brown sits with his girlfriend Lakenya Thomas as they watch a junior varsity game in a nearly empty gym, in Flint, Michigan, USA. The Flint Jaguars basketball team in Michigan embodies efforts to nurture stability, encourage mutual support and strengthen community spirit in a city struggling to survive. Flint, the birthplace of General Motors, is striving against outmigration caused by a precipitous decline in its motor industry, a health crisis brought about by the authorities switching water supply sources without proper safeguards, and the systemic neglect of high-poverty, predominantly Black neighbourhoods. Photograph: Chris Donovan/World Press Photo 2021 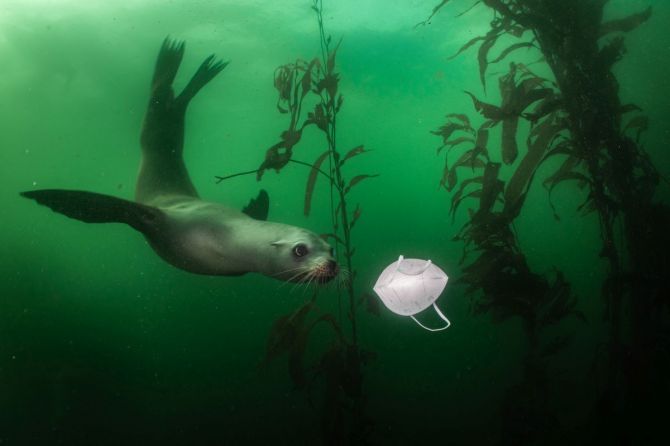 A Rothschild’s giraffe (Giraffa camelopardalis rothschildi) is transported to safety in a custom-built barge from a flooded Longicharo Island, Lake Baringo, in western Kenya. Rothschild’s giraffes are a subspecies of the northern giraffe and are classified as endangered. Longicharo Island was once a peninsula. Rising water levels in Lake Baringo over the past 10 years have cut the peninsula off to form an island. Particularly heavy rainfall in 2019 caused further floods, stranding nine giraffes. Photograph: Ami Vitale for CNN/World Press Photo 2021 Robert Baldwin Jr stands in his secret gunroom, behind a one-way mirror in his home in Las Vegas, Nevada, USA. His girlfriend, Tori, sits at the table. Robert received his first gun—a .22-caliber rifle—as a gift from his father when he was six. ‘I like to give myself a gun as a gift to mark important moments, like Christmas or my birthday.’ It’s a family tradition. When he turned six, his father gave him his first .22-calibre rifle and taught him how to use it. ‘He used to shoot for fun. He was a hunter, and he wanted to bring me along, to forge a special bond. He succeeded.' Photograph: Gabriele Galimberti for National Geographic/World Press Photo 2021 Twins Semyon and Stepan perform in the roles of dulgancha, mythical swamp creatures, in The Old Beyberikeen With Five Cows, in Sakha, Russian Federation. It is their first part in a film. Photograph: Alexey Vasilyev/World Press Photo 2021 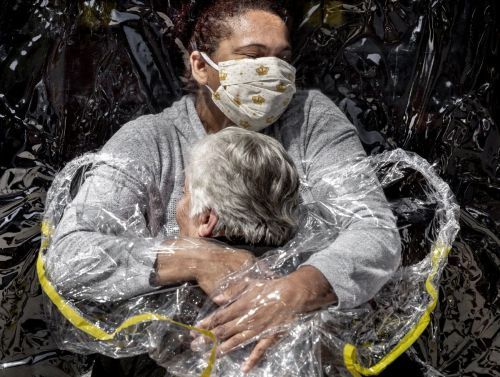 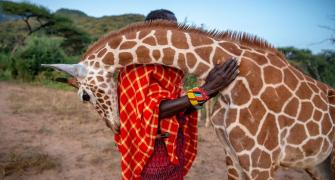 Buy these photos and you might help save the wildlife 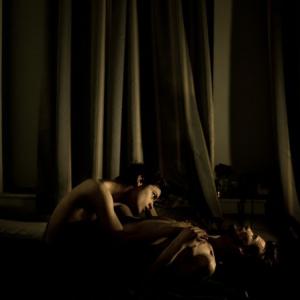