Endless rows of women clothed in bright yellow and green colours, representing the hues of harvest, sat attentively under a collage of coloured canopies at Delhi borders on Monday. 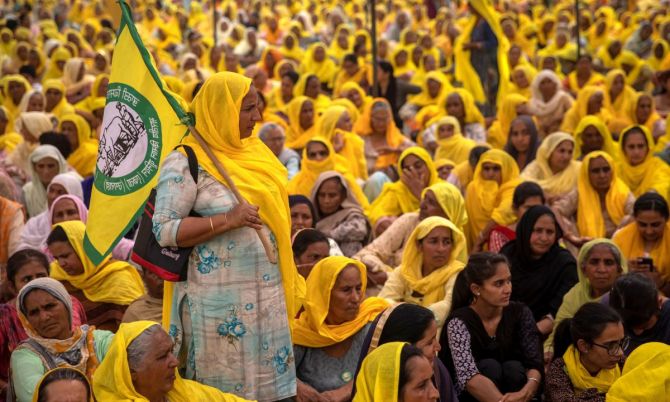 Passionate speeches by fellow women farmers captured the attention of thousands of these women who have been protesting against the Centre's new farm laws.

On International Women's Day, hundreds of women took to streets while raising slogans of "kisan ekta" (farmer unity) and some broke into nonchalant rhythmic steps of ‘bhangra'.

Similar scenes played out at all three protest sites around the national capital -- Singhu, Tikri and Ghazipur borders-- to celebrate women's contribution to the 100-day strong farmers movement against the farm laws.

Noting that women contribute significantly to the country's farming sector, the organisers had laid out elaborate plans to let the community manage the stage, arrange food and security, and share tales of their struggles on the occasion.

"The stage is being managed by women, the speakers are all women and the issues that are being discussed are of both farming and women farmers more specifically," farmer leader Kavitha Kuruganti said on Monday.

"The discourse of the debate is focusing on women farmers. The debate is also on the contribution of women in this movement," Kuruganti, who is also a member of the Samyukta Kisan Morcha, said.

She added that the participation of women has increased significantly with the arrival of "thousands of women". 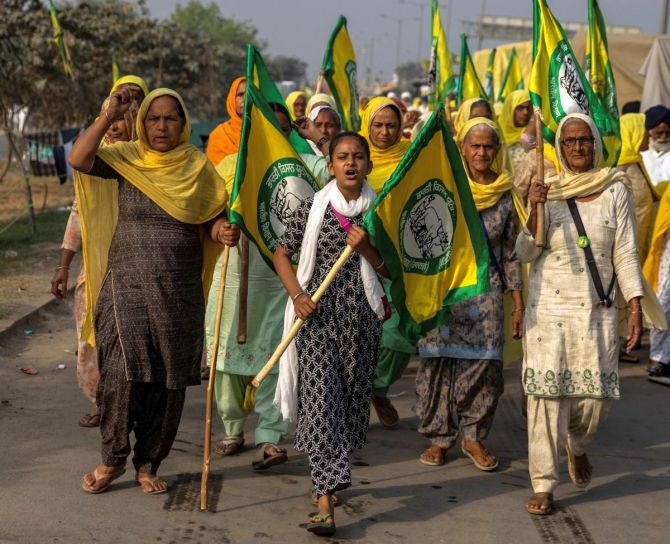 At a conference of women at Pakora Chowk-Tikri border, various issues related to women farmers were discussed. Activists of many progressive women organisations from Delhi also participated in this event, Samyukta Kisan Morcha said in a statement.

Saluting the "magnificent role" played by the women in the movement, Bharatiya Kisan Union Ekta (Ugrahan) called to raise awareness of women's rights and increase their participation in the struggle.

"They (women) recognise that these laws are death warrants for farming occupations. They are standing side by side with men in this struggle and have become the most knowledgeable and responsible part of the movement. Due to the patience, resilience and sacrifices of women, they have emerged as a force to be reckoned with in the struggle," BKU Ekta said in a statement.

Thousands of farmers, mostly from Punjab, Haryana and western Uttar Pradesh, have been camping at the Delhi border points for over 100 days, demanding the repeal of farm laws and a legal guarantee on the minimum support price for their crops.

International Women's Day is celebrated across the world on March 8 and is a day when women are recognised for their achievements, according to the United Nations.

This year's theme -- Women in Leadership: Achieving an Equal Future in a COVID-19 World -- celebrates the tremendous efforts by women in shaping a more equal future and recovery from the pandemic, and highlights the gaps that remain, the UN Women stated. 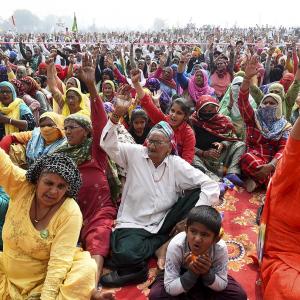 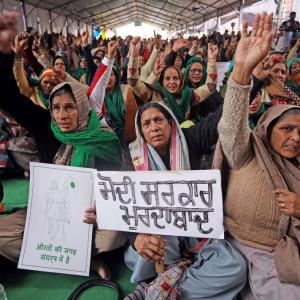