With paddy growers being blamed for causing air pollution, farm experts and farmers' outfits said they are compelled to burn stubble as they do not have any other feasible and cheap option. 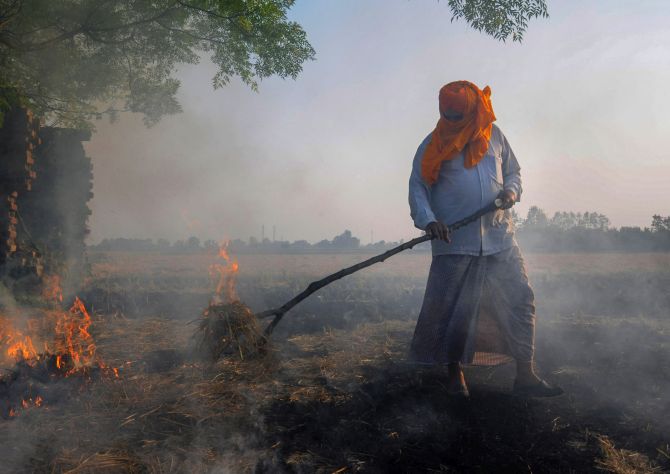 IMAGE: Smoke rises as a farmer burns paddy stubbles at a village on the outskirts of Amritsar. Photograph: PTI Photo

Scores of paddy growers in Punjab and Haryana continue to defy the ban on stubble burning, claiming they are "compelled" to do so in the absence of any financial support from the government for farm waste management.

Stubble burning in Punjab and Haryana is a major cause of air pollution not only in the two states but also in the national capital.

Governments of the two states are pinning hopes on farm mechanisation for the effective management of crop residue but the use of farm equipments, growers say, is not the "best solution which will take care of just minuscule area" of paddy.

With paddy growers being blamed for causing air pollution, farm experts and farmers' outfits said the community is a "soft target" and the "short-sighted" approach of policy makers in the government has not only "failed" to address the concerns of the growers but also to achieve the task of zero stubble burning.

Punjab has so far seen over 330 incidents of crop residue burning while Haryana has witnessed 701 incidents of stubble burning, officials said.

Though officials claimed reduction in paddy residue burning this year, farmers said the number of stubble burning incidents was lesser as paddy harvesting was yet to pick up in the wake of higher moisture content in crop caused by incessant rains last month.

"Farmers do not want to burn paddy residue. But they are compelled to burn stubble as they do not have any other feasible and cheap option," said Bhartiya Kisan Union (Rajewal) president Balbir Singh Rajewal.

Rajewal said the use of farm equipments for crop residue management was not an ideal solution as it is putting additional financial burden on small and marginal growers whose condition was already pitiable.

"Farmers who are in debt trap are committing suicide and now the government is taking penal action (imposing fine) against growers who burn paddy residue. Farmers have become soft targets for the authorities despite the fact that just 8 per cent of air pollution caused by farm residue burning," Rajewal said. 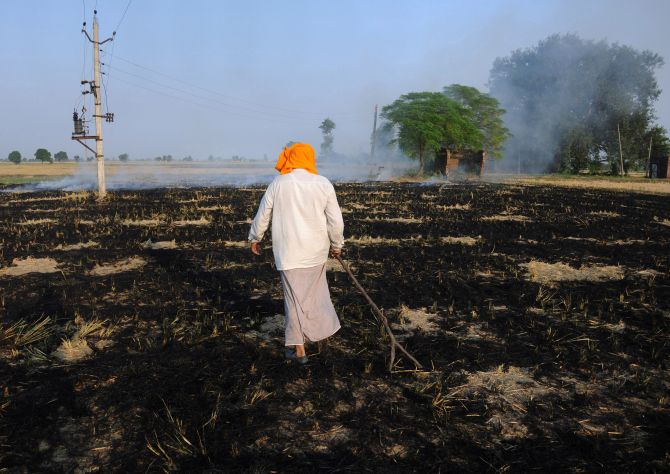 IMAGE: Farmers work in a field as smoke rises due to the burning of the paddy stubbles. Photograph: PTI Photo

Every year, Punjab and Haryana are blamed for rising air pollution and smog caused by crop residue burning by growers.

Farmers find stubble burning as an easy option as a way of its disposal in the wake of limited time available for next crop sowing.

The situation is likely to aggravate this year as the window period for managing the paddy crop residue has got shortened by at least 10 days because of rains last month that delayed paddy harvesting and some farmers said they will resort to stubble burning over taking the farm mechanization route.

"Any delay in next wheat crop will lead to drop in yield and it will cause financial losses to farmers," said Rajewal.

Farm experts said the best way to manage the crop residue is to award bonus as compensation to farmers for management of paddy straw.

"Giving Rs 200 per quintal to growers is the only option available to the government for the management of crop residue. What is the harm in giving money to growers when a substantial sum of money is spent on crop procurement," asked noted farm expert Devinder Sharma.

"If a farmer burns residue even after receiving money for its management then you take action against him/her," he said.

Moreover, farm mechanisation is not a solution where vegetable crop like potatoes are to be grown, said BKU president Gurnam Singh Chaduni. 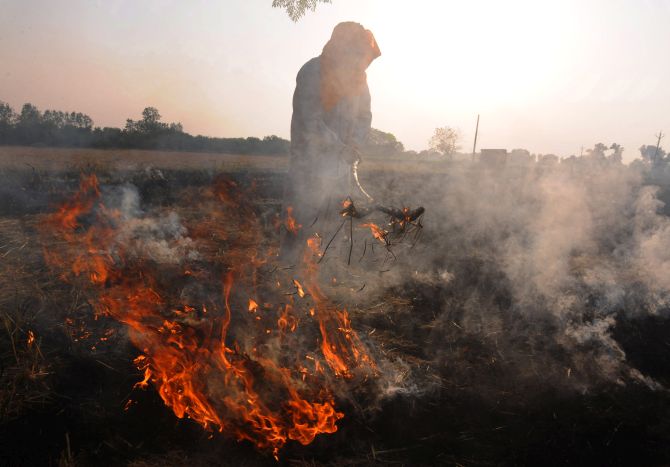 IMAGE: Farmers are burning paddy stubble despite a ban, before growing the next crop. Photograph: PTI Photo

"We have calculated that the use of machines is putting an additional cost burden of Rs 5,000 to Rs 6,000 per acre on the farmers, which they are unable to afford," Sharma pointed out, adding that machinery would deal with just four per cent of total paddy area.

The farmers' union also accused the government of not complying with the National Green Tribunal order which had directed it to supply machinery free of cost to farmers owning less than two acres of land.

Farmers also accused farm equipment manufacturers of increasing the cost of machinery after the central government provided funds to Punjab and Haryana governments for distributing machinery at a subsidy.

"Earlier rotavator was available at Rs 85,000 now it costs Rs 1.30 lakh. Similarly, cost of other machinery has also been increased," Rajewal said.

For promotion of agricultural mechanisation for in-situ management of crop residue, the Centre has sanctioned Rs 695 crore for Punjab and Rs 137 crore for Haryana.

Both states are giving 50 per cent subsidy on buying machines to individual farmers and 80 per cent to cooperative societies. 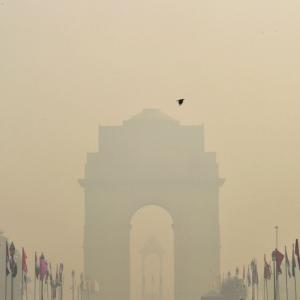