Why Kenya is burning 100 tonnes of ivory

The move is being taken in an attempt to deter poachers, say conservationists. As elephants continue to pay the ultimate price for the demand for their tusks, their advocates are preparing to watch the largest stockpile of ivory yet go up in flames in Kenya’s Nairobi National Park on Saturday.

Kenyan authorities have built towering pyres of more than 100 tonnes of elephant tusks -- constituting nearly 5 per cent of the world’s ivory -- that will be burned in an attempt to deter poachers.

“Although the destruction of elephant ivory will not in itself put an end to the illegal ivory trade in elephant ivory, it ensures that no one will ever profit from this contraband and, when coupled with the seizure of ivory and the prosecution and conviction of offenders, it sends a very powerful message that Kenya does not, and will not, tolerate this illegal trade, and that illegal traders now face significant risks along the entire illegal supply chain — in source, transit and destination States,” the Kenya Wildlife Service said in a statement. This is not the first time the country has resorted to burning or crushing elephant tusks to deter poachers. According to the World Wildlife Fund, which calls the move “a symbolic gesture with real potential to stop wildlife crime,” Kenyan authorities destroyed nearly 40 tonnes of ivory between 1989 and 2015.

On Saturday, dignitaries led by Kenyan President Uhuru Kenyatta -- who last year set fire to 15 tonnes of ivory -- are expected to light a fuel gel which will flow into the centre of each pyre and ignite pieces of confiscated endangered African sandalwood. A mixture of diesel and kerosene will be pumped through pipes into each pyre, creating a sufficiently high temperature to incinerate the ivory, a process expected to last many days before everything is reduced to ashes. IMAGE: This is not the first time the country has resorted to burning or crushing elephant tusks to deter poachers. Kenyan authorities destroyed nearly 40 tonnes of ivory between 1989 and 2015. Photograph: Thomas Mukoya/Reuters

However, despite the rise in their numbers, the African elephant -- the world’s largest land animal -- still faces extinction. According to the World Wide Fund for Nature, there are only 470,000 of these animals left today -- down from over three million in the first half of the twentieth century. EPL: With three-match ban Tottenham's Alli out for rest of season 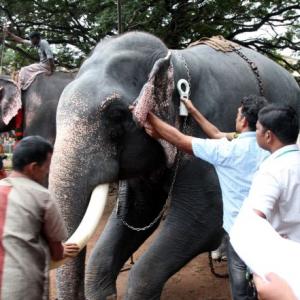