What happened when Rahul had 'surprise date' with students

Seven young students from different parts of the country had a “surprise” dinner interaction with Congress president Rahul Gandhi where over Chinese food they shared their ideas about improving the lives of people and were promised that some may be included in the party manifesto. 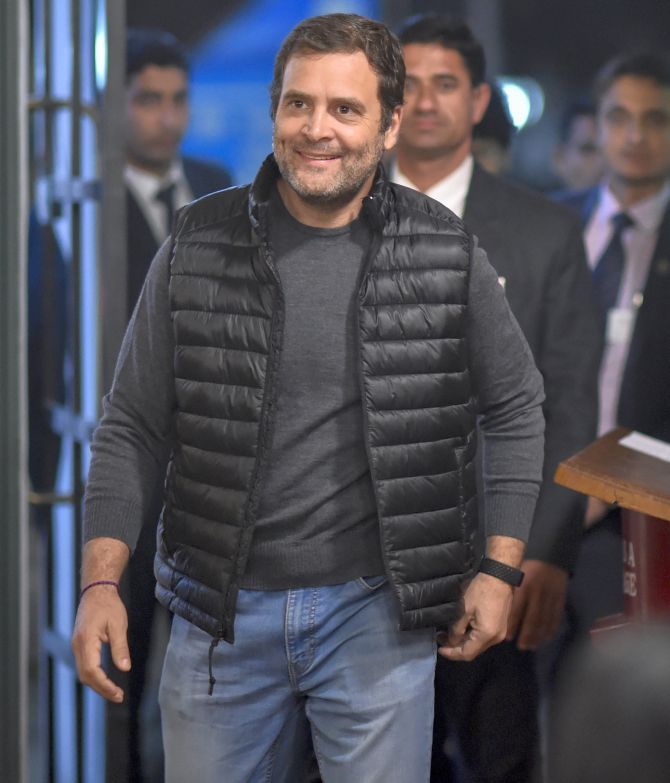 IMAGE: The group of seven youngsters from Delhi, Assam, Assam, Maharashtra, Kerala and Uttar Pradesh were surprised when Rahul Gandhi walked into the upmarket Chinese food joint as they had been told that will have an interaction with Congress party, but not that it will be the party president himself. Photograph: Ravi Choudhary/PTI Photo

From bringing out Congress manifesto in Braille, setting up gender-neutral toilets to steps for removing inequalities in education system and caste discrimination in society, the conversation touched diverse issues as the youngsters opened up to a “warm and affable” Gandhi.

With the crucial Lok Sabha polls drawing near, Gandhi has started the outreach “Apni Baat Rahul ke saath” and this group of seven youngsters from Delhi, Assam, Assam, Maharashtra, Kerala and Uttar Pradesh were the first to interact with him.

Gandhi will have several such sessions with students.

Critics might point out that the Congress has often mocked Prime Minister Narendra Modi for engaging with students, including his recent interaction with Class X and XII students “Pariksha Pe Charcha” programme, and his radio programme ‘Mann ki Baat’.

But Congress leaders say Rahul Gandhi’s interactions are more “personal”, where he takes out time to listen to the people, a view endorsed by Pratishtha Deveshwar, a Delhi University student studying political science in Lady Shriram College. 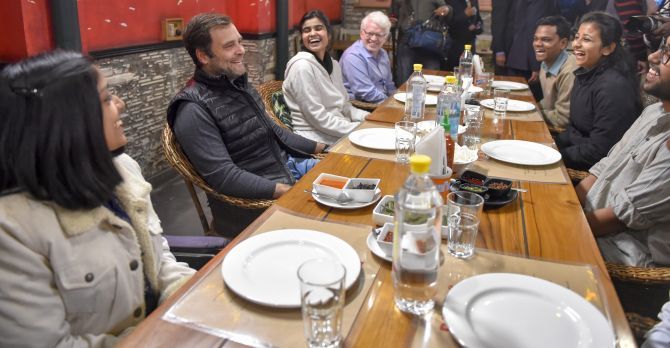 IMAGE: The meeting with the students is part of Rahul's outreach “Apni Baat Rahul ke saath”. Gandhi will have several such sessions with students. Photograph: Ravi Choudhary/PTI Photo

“He is not an ‘I know everything’ kind of person and he was open to a conversation and discussion in trying to understand things,” said Deveshwar who was in the group that interacted with Gandhi for nearly two hours.

“Such a friendly humble person, he was actually serving me from his plate. You do not expect such things from a person of this stature. It really breaks the ice between the big politicians and the ‘aam aadmi’,” she said.

Abhilash Karri, an IIT student from Mumbai, recalls how surprised they were when they saw a beaming Rahul Gandhi walking into the dining area of an upmarket Chinese food joint in New Delhi on late Friday evening where they sat. The students had been told that will have an interaction with Congress party, but not that it will be the party president himself.

The meeting was informally structured with Gandhi hearing the new age voters on their priorities for themselves and their countrymen. 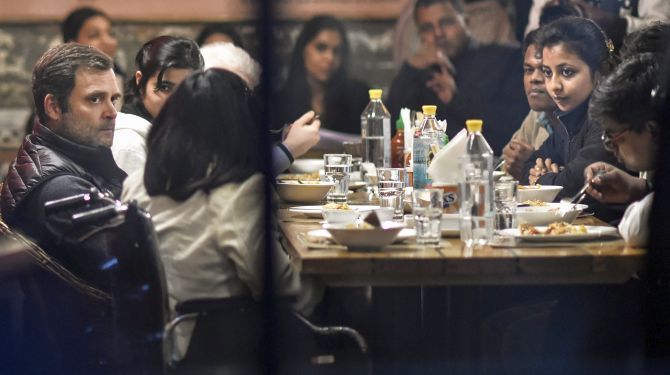 IMAGE: One of the students at the meeting, Pratishtha Deveshwar, a Delhi University student studying political science in Lady Shriram College, said that Rahul was an ‘I know everything’ kind of person and he was open to a conversation and discussion in trying to understand things. Photograph: Ravi Choudhary/PTI Photo

Among the invitees was an LGBTQ rights activist who suggested gender neutral toilets for the trans people in order to ensure they are not body shamed.

During his conversation, Karri said he stressed on making education accessible to all by introducing a fee structure which can be afforded by the underprivileged.

“We need to evolve our own ideology suited to Indian conditions.

“We also discussed the effects of 10 per cent reservation to the upper caste poor,” he said.

“I did not know that he was coming. It was great moment for me,” he said. 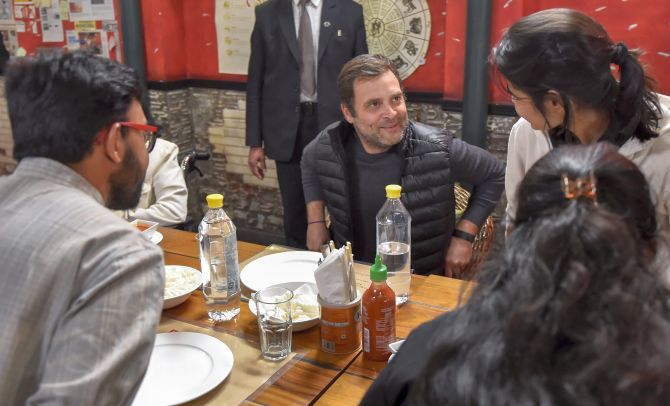 IMAGE: Issues such as caste based discrimination and issues affecting the LGBTQ community were also discussed. Photograph: Ravi Choudhary/PTI Photo

Karri said the good schemes brought by one party need to be continued by another as “our ultimate aim should be to serve the country”.

Deveshwar said Gandhi told her that he will work on issues like making colleges and universities more accessible.

“I also suggested that the Congress needs to come out with its manifesto in Braille, that is for people who are visually impaired. That is the first step that the parties can take in this regard and he has assured me that they will do this,” she said.

About Gandhi’s response, he said, “He told me that ‘you are pretty impressive for a 20-year-old’, which is a compliment that I am going to hold onto myself for my entire life. He knows how to give importance to everyone.”

“He was articulate. I would be somebody who would take him seriously. We need to be taken seriously, we cannot be taken for a joy ride and our lives matter. Transwomen are being murdered everyday and transmen need attention. The gay men, lesbians all require attention from the community and the government as these are oppressed, ostracised people,” he said. 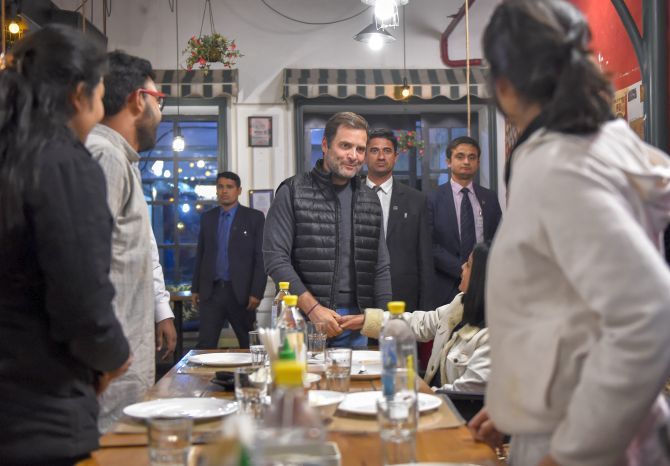 IMAGE: Another student said that Rahul told him that he was 'pretty impressive for a 20-year-old' -- a compliment that he would hold onto for the rest of his life. Photograph: Ravi Choudhary/PTI Photo

Gandhi promised to put him across to those involved in drafting the manifesto for the Congress party.

“We would be happy to discuss our issues with the party so that they can be added to the manifesto. Our concerns are surrogacy laws, civil marriage laws and gender neutral bathrooms and not third gender bathrooms. We cannot be body shamed any longer. Trans-men need to be given more attention,” he said.

Shemaila Ali Khan, an MBBS student from Delhi, said she highlighted before Gandhi the issue of girls’ education in Muslim community.

Anil Kumar Maurya, a law student from Agra in Uttar Pradesh, discussed the issue of atrocities against Dalits and expressed the hope that the Congress party would take it up.