News
Business
Movies
Sports
Cricket
Get Ahead
Money Tips
Shopping
Sign in  |  Create a Rediffmail account
Rediff.com  » News » 'There is a lot of change in Rahul Gandhi'

'I think he had this in his head to go to different places, get some experience and then become the Congress president.' 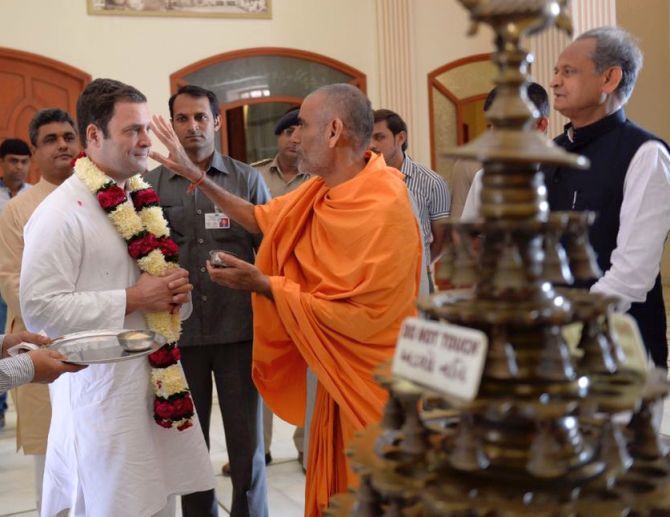 IMAGE: Rahul Gandhi began his campaign for the assembly election in north Gujarat with a visit to the Akshardham temple in Gandhinagar, November 11, 2017.

Sheela has since moved from Rediff.com to the NewsX television network, where she spoke to Ahmed Patel after his boss stepped down as Congress president.

Now, please read the second part of Sheela's interview with Ahmed Patel where he discusses Rahul Gandhi's rise to the Congress presidency, why Nitish Kumar left the Mahagathbandan in Bihar and his own future:

Don't you think there was some huge political issue that after ten years of Congress Raj, Congress got only 44 seats?

See the way their (the Bharatiya Janata Party) marketing was and the way we worked for ten years and whatever programmes we introduced -- whether it was MNREGA, RTI, RTE, food security etc.

So we could not market the revolutionary or the good work we had done. Our opposition, by putting wrong charges, won.

But then there was the 2g scam (this interview was recorded before the verdict in the 2G case)...

Can anyone prove that it was a scam of thousand crores of rupees?

This was a false allegation. And by doing wrong and false publicity people have been misled.

Ahmedbhai, don't you think the way Narendra D Modi came up as such a strong leader winning a majority of votes, it must be the result of some fault of yours too?

It wasn't that Narendra Modi was a strong or popular leader. It was anti-incumbency whose advantage they took. He was desperate to become a PM candidate. And we all know how he became the PM candidate.

If there has been someone else instead of him as the PM candidate, even then this NDA government would have been formed. Maybe they would have got a few seats less.

Your relationship with Narendra Modi has been in the limelight. He quoted someone's tweet saying that Ahmed Patel would have been Gujarat CM...

I don't think it is right to say such a thing while sitting in such a high and respectable seat. He could have avoided this thing. It was an irresponsible statement.

Coming back to the 2014 elections, don't you think Congress was unsuccessful in hearing the voice of the common people?
When ministers use words like 'Hindu terrorism'...

See, every party has made some mistakes. But it is not that we were unsuccessful in explaining to the people.

They are realising today the programmes we gave and the benefits they reaped.

Whether it is about employment or increment, today people are praising that good work was done in ten years. But we could not reach out to the people...

But people also talk of corruption side by side...

This has been a wrong attempt at showing the Congress in the wrong light of corruption. It has only been three years till now for them (the BJP) too. See what happens in the future.

You are a senior Congress leader. An ordinary Congress worked would want to know why the high command is unable to run the party with a combination of experienced and young people? What are the reasons?

It is not like that. The history and achievements of the Congress, after the assassination of Rajiv Gandhi, the children who were born must be 25/27 today. They do not know what the Congress did in the ten years.

Our opposition has been successful to an extent in convincing them. We were unable to do that.

But in the Gujarat elections this time, when Rahulji had his meetings, we mostly got to see young people. The youth were responsive when Rahulji came and spoke.

You maintained good relations with the Congress' allies. Now the Congress is slowly losing all its allies. The NCP (Nationalist Congress Party) is also sitting on the fence.

But it is because you are not giving hope which is why they left...

Then tell me, why do you think Nitish Kumar left?

Everyone knows why he left. I would not like to say anything on camera. The way he left and how he was criticised for it, everyone knows well.

Ahmedbhai, you have been with the Gandhi family and the Congress party for the last 40 years. What new message would you like to give to the new party president Rahul Gandhi?

I am very happy that he has taken over the position of Congress president. I have full faith, there is a lot of change in Rahul Gandhi.

I have seen him closely in Gujarat and I have full faith that with his coming, the Congress will get new energy and strength.

And the organisation will come up as a strong one which will be able to handle all the challenges that are in front of the party or the country.

Ahmedbhai, why did it take so long for Rahul Gandhi to become the Congress president when everyone knew this was going to happen?

I think he had this in his head to go to different places, get some experience and then become the president.

No, he will work his own style.

What is his style?

His style is to take everyone along and make the Congress stronger. Everyone has their own style.

Ahmedbhai, what is your future?

I am here, I am in Parliament. Whatever work I will be given, I will do it.

But now even I am growing old, I have been in politics for 40 years now. Younger people should now be given opportunities.

Don't you think that somewhere the Congress' message is not reaching out to people? People are not absorbing it. Where do you think is the disconnect?

I don't think so. I have been observing for the last 6, 8 months and the message that should reach out to the people is reaching them. 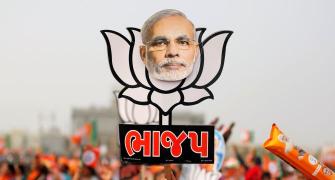 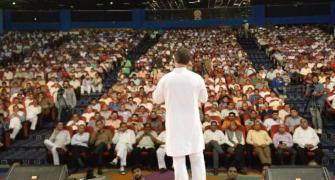 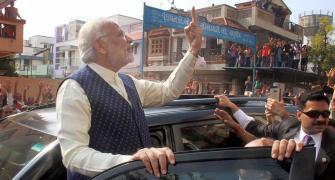 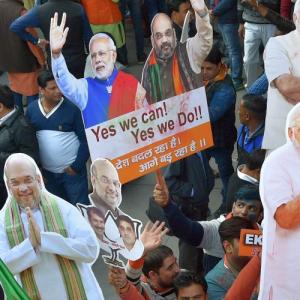 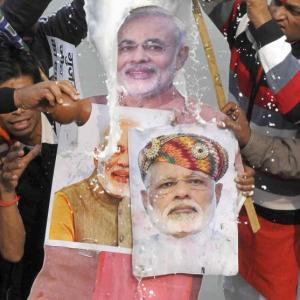