Anti-citizenship law protesters offered roses to security personnel at the Jantar Mantar on Thursday, saying the police can baton charge them as much as they want, but their message is "love in return for hatred". 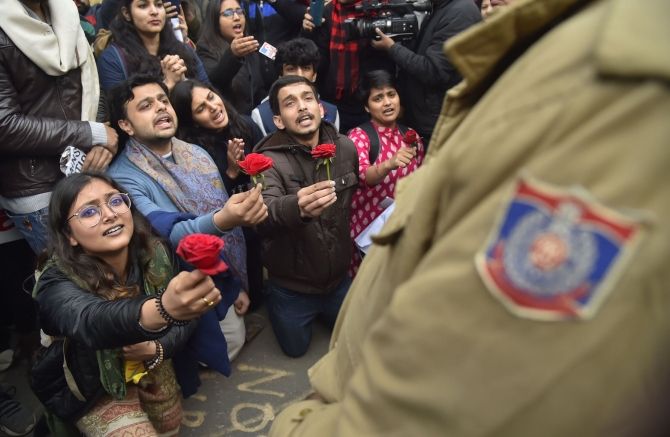 Some lawyers participating in the demonstration also offered legal assistance to protesters in case they are detained by the Delhi Police.

A large number of protesters, including students and activists, gathered at Jantar Mantarin New Delhi on Thursday against the new legislation after they were not allowed to hold demonstrations near the Red Fort and Mandi House where prohibitory orders have been imposed.

Several posters have been put up at Jantar Mantar against the new citizenship law, with one reading -- "Digital India with no internet, 'Janta mange rozi roti, milti hamko lathi gali' (people demand employment but get batons and abuses); save constitution save country."

Sandeep Dhiman, a protester, said, "They can lathi charge us as much as they want, we will still offer them roses. Love in return for hatred. We are ready to face their tear gas and water canons."

At Jantar Mantar, help desks were set up by volunteers while stationary was being provided to write fresh posters. Announcements were also made at the Jantar Mantar about food packets available the help desk.

Students from different law schools were also present at the spot volunteering.

"They (police) can block the roads and close the metro stations. Let people walk through each street. Let each street be remembered in history for these protests," said Ramesh Ram, a law student.

Another protester, Jyoti Saha, said that she was attending the agitation with her five-year-old twins, "so that tomorrow, when they (police) make appeals to parents to not let their kids go to protest, they (kids) know what to do."

At Jantar Mantar protest site, a human chain was formed to make space for a group of Muslim protesters to offer 'namaaz'.

"We respect every religion, the government wants to divide us while there is no division in our hearts," said Rajeeb Das, one of the protester leading the human chain formation.

At another protest site near the Red Fort, a group of Muslim protesters offered namaz.

WATCH: Namaaz being offered amid protests in New Delhi

Entry and exit gates of at least 19 Delhi Metro stations were shut while barricades were erected in large parts of south, east and north Delhi to check movement of protesters, triggering massive traffic snarls in large parts of the city.

In the area around the Red Fort, scores of protestors were dragged into buses by police in a bid to clear the area where Section 144 of the CrPC was imposed restricting gathering of more than four people.

Protests against the Citizenship (Amendment) Act resulted in huge traffic snarls across the national capital during the morning peak hours, while the Delhi-Gurgaon route remained in a gridlock as vehicles lined up for as long as 10 km on the expressway connecting the two cities.