Over 71% voting recorded in 2nd phase of Chhattisgarh polls 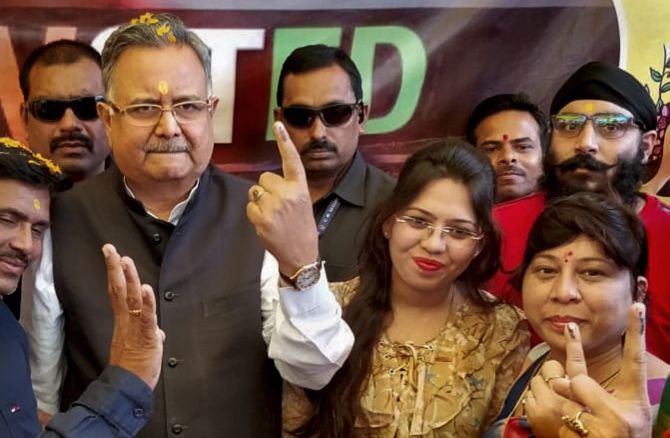 A turnout of 71.93 per cent was recorded till 6 pm in the second phase of assembly elections in Chhattisgarh on Tuesday and polling remained incident-free, the Election Commission said.

Addressing a press conference in New Delhi, Deputy Election Commissioner Umesh Sinha said the polling percentage is likely to rise further as a number of people were still in the queue for voting.

He said the polling percentage for this phase is slightly higher than that recorded during 2013 which was 71.13 per cent.

Polling for as many as 72 seats were conducted in the second phase.

Sinha said Tuesday's election was peaceful and incident-free as elaborate security arrangements were made. 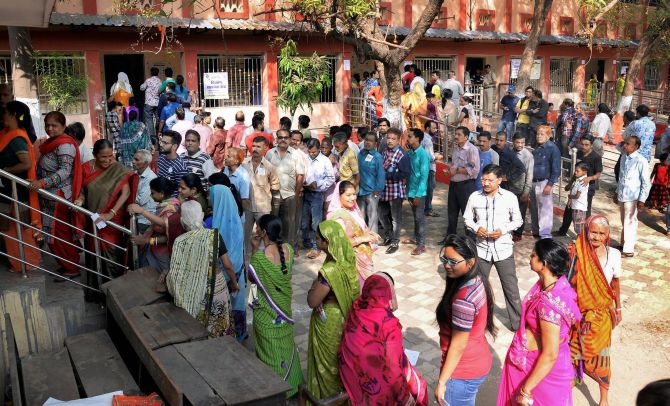 IMAGE: Voters stand in a queue at a polling station to cast their votes for the 2nd phase of assembly elections, in Raipur, on Tuesday. Photograph: PTI Photo

He added that a number of old voters, including those over 100 years of age, also exercised their franchise and the Commission had made arrangements for them.

The EC said with Tuesday's polling percentage the total average turnout for Chhattisgarh has been 74.17 per cent, which may go up further.

During the first phase of voting on November 12 for 18 seats in the Naxal-affected areas of the state, a total of 76.42 per cent polling was recorded.

This was the last of the two-phase polls to the 90-member assembly, where the Bharatiya Janata Party has been in power for the last 15 years. 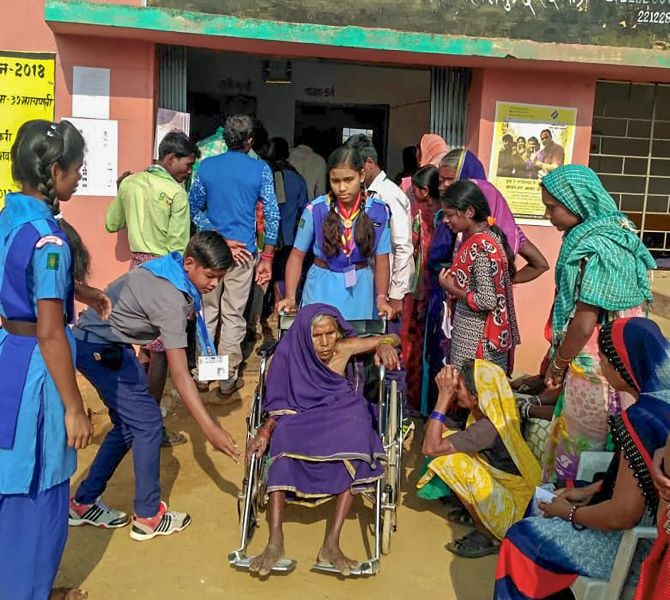 IMAGE: An elderly woman being carried out of a polling booth after she cast her vote in Basna. Photograph: Press Information Bureau of India

"64.8 per cent polling has been registered till 5 pm. Although voting ended at 5 pm, voters were waiting in queue in large numbers in the polling booth premises," the official said.

"The voting percentage is expected to rise," he added.

The time of polling was from 8 am to 5 pm, but in two polling booths -- Amamora (booth no 72) and Modh (no 76) in Bindranavgarh constituency (Gariaband district) -- voting was held from 7 am to 3 pm due to Naxal threats, the official said.

There were reports of technical snags in EVMs at some places, which delayed the polling process, he said.

Meanwhile, the Election Commission has removed a presiding officer and a polling staff of different polling booths in Marwahi constituency of Bilaspur district, after receiving complaints against them.

"An inquiry has been ordered against Mandavi and Tiwari and they have been ousted from the polling duty," it said. 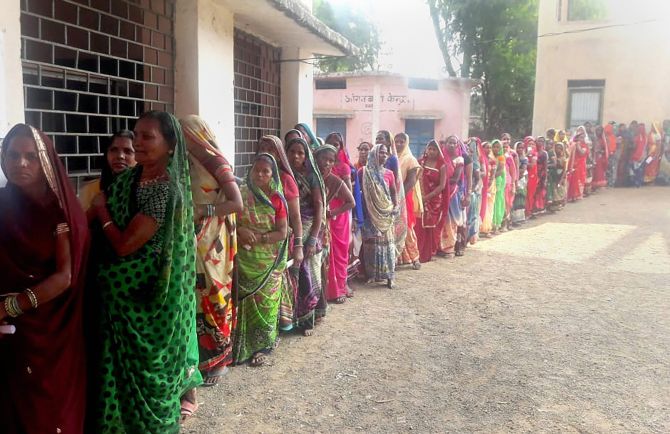 IMAGE: Women stand in a queue to cast their votes at a polling booth in Banahil. Photograph: Press Information Bureau of India

Around 1.50 lakh security personnel have been deployed across the state to ensure peaceful polling, he said.

In the second phase of polling, extra vigil is being maintained in districts including Gariaband, Dhamtari, Mahasamund, Kabirdham, Jashpur and Balrampur, which are Naxal-affected areas, the official said.

A total of 19,336 polling booths were set up for the second phase, of which 444 are sensitive booths.

The first phase of polls in 18 seats of eight Naxal-hit districts on November 12 had recorded over 76 per cent voter turnout. The counting of votes will be held on December 11. 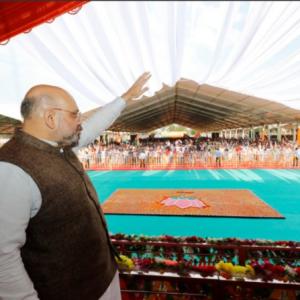