News
Business
Movies
Sports
Cricket
Get Ahead
Money Tips
Shopping
Sign in  |  Create a Rediffmail account
Rediff.com  » News » 5-state polls will be a reality check for parties ahead of 2019

Labelled as the semi-final before the big Lok Sabha poll, assembly elections in five states will set the tone for summer of 2019. 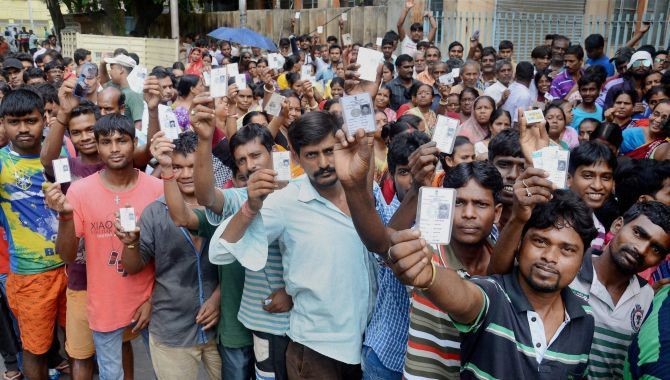 Together they constitute just 83 Lok Sabha seats, not even 20 per cent of the total strength of the Lower House. But elections to the five assemblies, for which the results will be out on December 11, will be about prestige -- for the Bharatiya Janata Party, which is in power in three of the five states; K Chandrasekhar Rao and his Telangana Rashtra Samithi; and the Congress, which currently rules Mizoram.

Business Standard deconstructs the mathematics and chemistry of the forthcoming round of polls.

The Vasundhara Raje government is facing a problem of plenty.

With 160 MLAs, she really can’t be blamed for being unable to satisfy all.

This is the crux of the Bharatiya Janata Party’s difficulties.

Those who have been in the BJP for decades have drifted away.

Admittedly, leaders like Ghanshyam Tewari, who has formed his own political party vowing to fight the BJP, will not be able to make much of a dent.

But the Raje government could have done without this problem.

On the other hand, the Opposition Congress, although with factional problems of its own, is snapping at its heels on the back of mistakes made by the administration.

In September 2017, the BJP government announced farm loan waiver of up to Rs 50,000 after a 13-day farmer agitation in the Shekhawati region but has not acted upon it.

The Centre’s recent announcement of hiking minimum support price, farmer leaders say, is also an eyewash because it doesn’t take into account all the costs of production and includes only family labour, and cost of fertiliser and seeds.

Businessmen and traders have also complained that the good and services tax and demonetisation hit their businesses.

Livelihood issues, infrastructure creation and development are likely to be key issues.

Rajasthan has seen some vigilante violence which has the minorities up in arms.

When the first-time chief minister of a new state, K Chandrasekhara Rao, called for the dissolution of the assembly and fresh election nine months ahead of the schedule (the state polls should have been held along with the Lok Sabha elections in May 2019), no one was surprised.

KCR has proved to be a wily politician -- keeping the BJP thinking it had an ally in him (the TRS supported its choice of president) but also hosting opposition MLAs from Karnataka in Hyderabad when after the Karnataka election, the Congress alliance, Janata Dal-United feared poaching by the BJP.

The TRS has encouraged defections from the Telugu Desam Party, reducing the number of TDP MLAs from 16 to 3.

The only force it has not riled is the All India Majlis-e-Ittehad-ul Muslimeen.

As a government, the TRS’s performance has been spectacular in terms of delivery, although the base has been low.

The Congress has a relatively weak leadership and the BJP hasn’t even started building up a base in Telangana.

At the moment, it’s the TRS all the way.

With the Congress divided into many factions led by Kamal Nath, Digvijaya Singh, Jyotiraditya Scindia, Suresh Pachauri, Ajai Singh, Arun Yadav, Kantilal Bhuria and a few others, the BJP is confident it will manage another term.

Not because it is popular but because the Congress is a divided house.

In a recent Dainik Bhaskar survey, 55 per cent respondents said factionalism is the biggest challenge for the Congress; 30 per cent said the party could not provide a viable alternative because of in-fighting.

But Madhya Pradesh is possibly the only state in India where firing on farmers led to the death of nine.

The primarily agrarian state suffered as a result of a global crash of agri-commodity prices, and while Chief Minister Shivraj Singh Chauhan tried to reverse the damage, he could not intervene effectively.

The plight of farmers, issues of caste (MP has seen a forward caste protest movement develop) and jobs are going to be the main issues.

Will this northeastern state buck the trend and not succumb to the BJP like its neighbours?

The state is currently ruled by the Congress but there is no visible anti-incumbency and at a recent party meeting, the 76-year-old chief minister, Lal Thanhawla, told party colleagues that the Congress would be able to win the assembly polls easily as it had brought “peace and tranquillity”, though it has been ruling since 2008.

Like in the rest of the northeast, tribal loyalties are strong here.

One of the biggest issues in the election is how to bring the entire state under the Sixth Schedule to protect the tribal nature of Mizoram, end border disputes with Assam, and drive out illegal immigrants.

Zoramthanga, chief of the Mizo National Front, the state’s biggest regional party that has been in power twice between 1998 and 2008, is clear that the BJP is not a factor and that the state would see a straight fight between his party and the Congress. '

The most marginal player, untested in any previous election, the Janata Congress Chhattisgarh led by Congress rebel and former chief minister Ajit Jogi will likely hold the ace in the forthcoming election.

The Congress had eyed the 4.27 per cent votes polled by Bahujan Samaj Party in 2013 to bridge the gap and leave the BJP behind.

But as the Congress scratched its head wondering how to proceed next, it was Jogi who moved in, tying up with the BSP to seal an alliance deal.

How will this play out? This is a crucial question.

Jogi will take away the Congress's votes.

But he has a following among tribals and will also take away the BJP's votes.

If the Jogi alliance manages to win some seats, the possibility of a hung assembly cannot be ruled out.

In case of a fractured mandate, it is possible that both national parties will woo him and he may act as kingmaker.

While the ruling Raman Singh administration will list its achievements ranging from leakage free delivery of rations, the Congress will home in on corruption and lack of development in the state.

This promises to be the most interesting among all the five assembly elections. 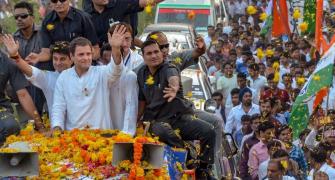 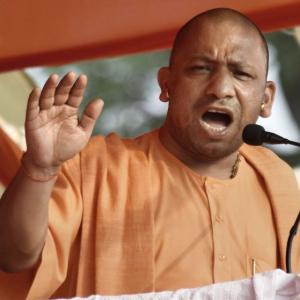