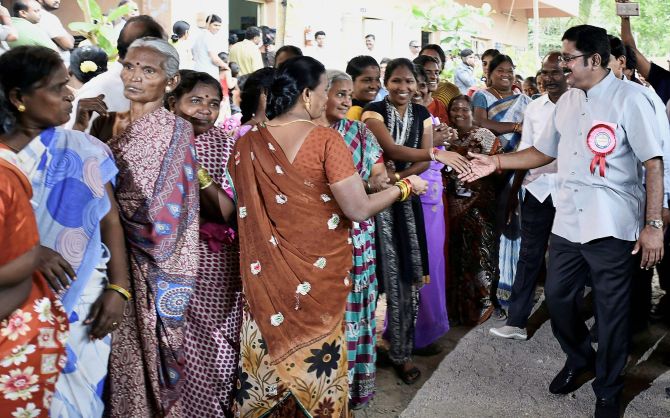 IMAGE: Sidelined AIADMK leader TTV Dinakaran, who is contesting as an Independent candidate, greets voters at a polling booth during voting for the RK Nagar assembly constituency bypoll in Chennai on Thursday. All Photographs: R Senthil Kumar/ PTI Photo

The RK Nagar bypoll on Thursday witnessed a record 77.68 per cent voter turnout with polling to the constituency, which was represented by the late J Jayalalithaa, passing off peacefully amid tight security.

Election officials in Chennai said there may be some variation in the figure after taking into consideration the polling percentage at some booths where voting went on beyond 5 pm.

The voter turnout is higher than the 68 per cent recorded in the 2016 assembly election, according to officials.

The DMK is putting up a tough fight to wrest the seat after a hiatus of over two decades.

Of the 59 candidates in the fray, the fight is essentially triangular with the key contenders being ruling AIADMK's E Madhusudhanan, main opposition DMK candidate N Maruthu Ganesh and Dinakaran, contesting as an Independent.

The ruling AIADMK got back its Two Leaves election symbol back following merger of factions led by Palaniswami and former rebel O Panneerselvam.

The run up to the bypoll saw political parties and candidates holding as many as 152 public meetings and taking out 605 processions with the campaigning ending on December 19.

The 2015 RK Nagar bypoll, in which Jayalalithaa was elected by a huge margin of 1.5 lakh votes for the first time in this segment, had witnessed a record 75 per cent turnout.

Serpentine queues were witnessed in booth after booth, right from 8 am when voting began with women outnumbering men in several of them.

A large number of people were awaiting their turn to vote even at the scheduled close of voting at 5 pm. 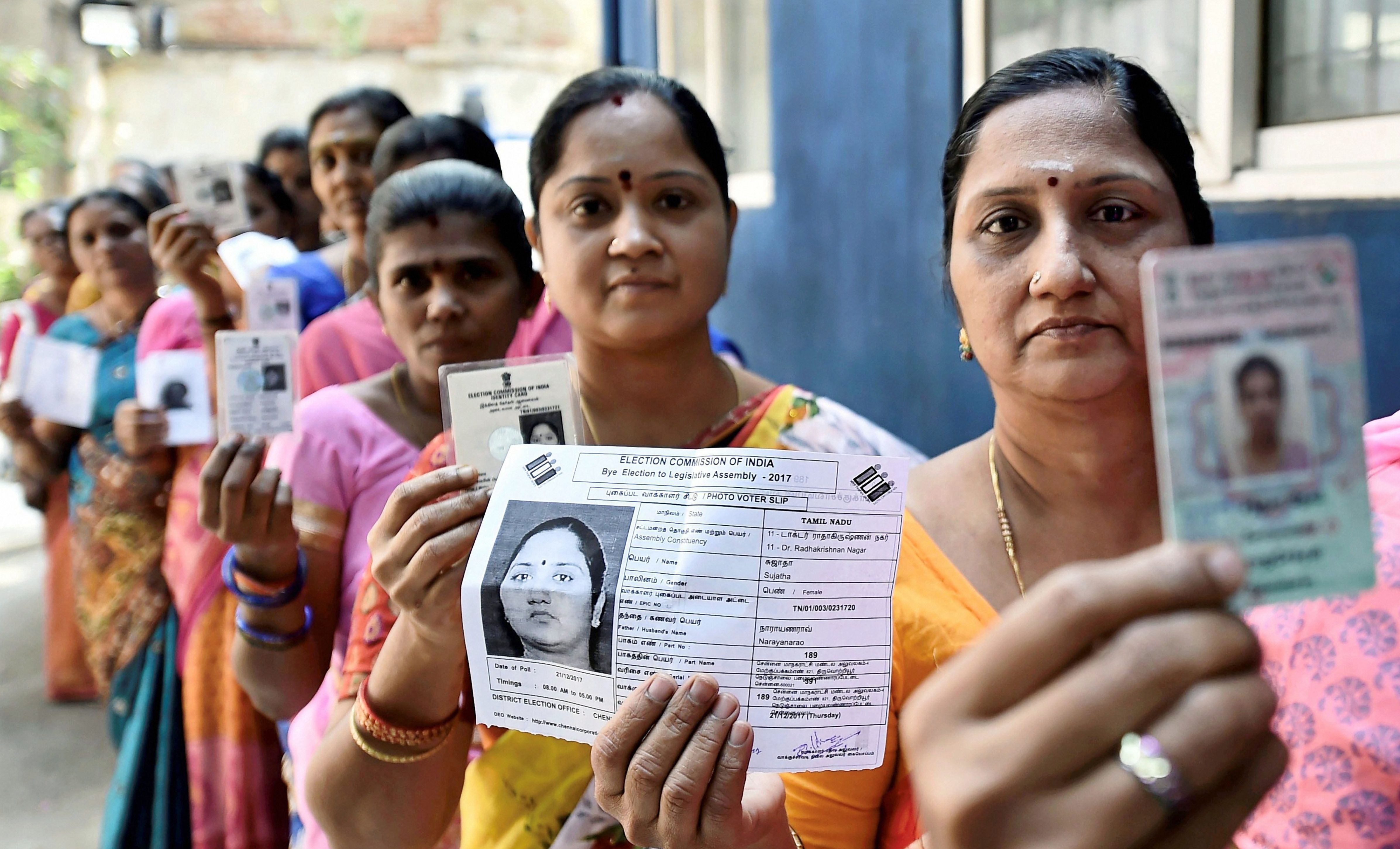 IMAGE: Women wait in long queue at a polling booth to cast their votes for the bypoll. Photograph: R Senthil Kumar/ PTI Photo

All those who were present inside the polling stations ahead of the 5 pm deadline were given tokens by officials to ensure that they exercised their franchise.

There were, however, sporadic complaints of snag in EVMs, and consequential delay.

Gun-toting Central Armed Police Force personnel in their trademark green uniforms were stationed at all the polling stations and across the 45 checkposts in and around the Dr Radhakrishnan (RK) Nagar constituency.

Election authorities made elaborate arrangements to ensure both hassle free environs for voters and measures for free and fair polling with nine observers, 307 micro-observers and 258 web cameras to monitor the poll process.

In booths that had a significantly high number of voters, a medical team comprising doctors, and paramedics were stationed.

'Pandals' were put up, and help desks helped people find the right booth to vote. Amenities like drinking water, and toilets were also in place.

Election officials said 79.21 per cent of women voters exercised their franchise while 75.92 per cent of men cast their votes.

Counting of votes will be taken up on December 24 and the results are expected to be out by afternoon that day.