At least 22 people were killed, over 60 injured and many others trapped as a section of an under- construction flyover on Thursday collapsed on a congested road intersection in Kolkata, an accident that came as a major embarrassment to ruling TMC bang in the middle of elections. Unconfirmed sources have put the death toll at 22 after the collapse of the huge girder that crushed people and vehicles which the flyover builder described as an "act of God", drawing flak.

The West Bengal government ordered a high-level probe into the tragedy that triggered a blame game with the opposition accusing the Mamata Banerjee government of callousness.

Hitting back, Trinamool Congress said the previous Left Front government during whose rule the construction of the flyover began was responsible for the collapse. 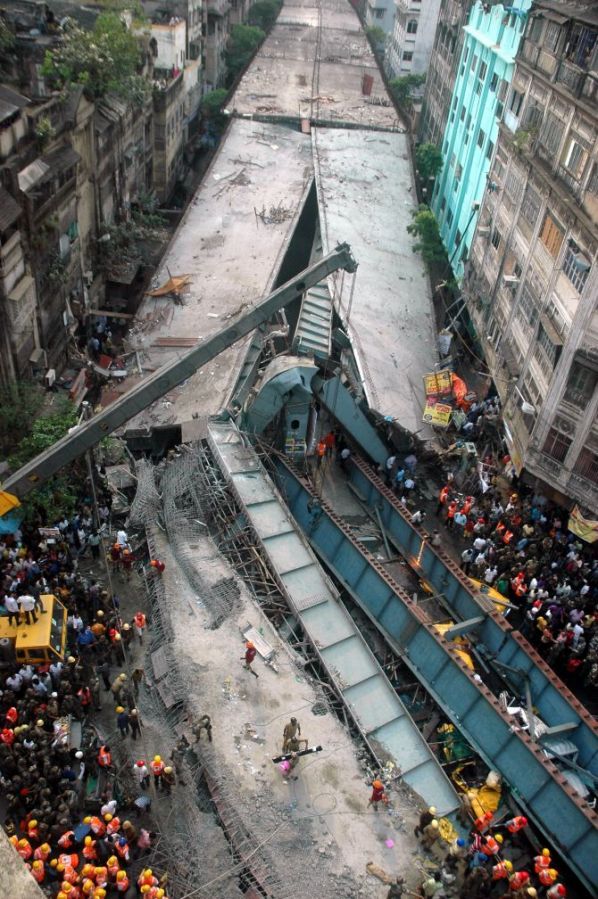 The police said that 18 persons died in the mishap in the Burrabazar area, which houses the city's largest wholesale market, while several others were injured.

The injured were rushed to the hospitals in the vicinity. Two policemen and one Jorabagan traffic sergeant Sandip Haldar were critically injured.

State administration officials said 62 people were injured and taken to hospitals, while several others were feared trapped under the debris.

"It is nothing but God's act," claimed Panduranga Rao of the Hyderabad-based IVRCL Construction company engaged in the flyover's construction. 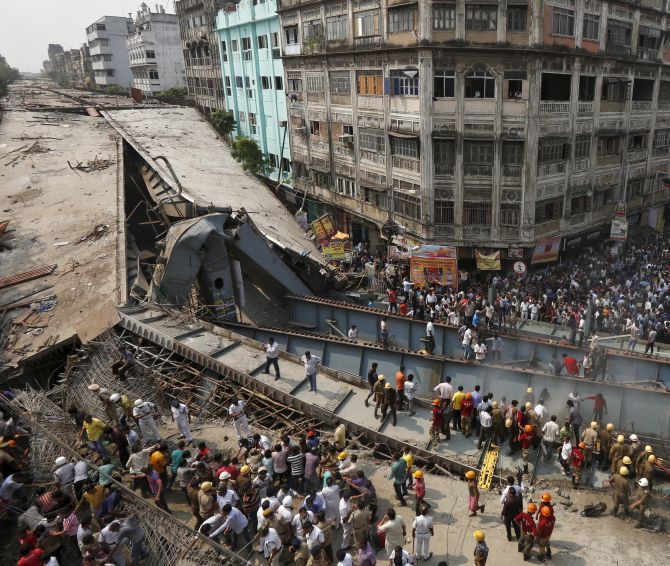 IMAGE: Rescue workers and locals help out at the site of the collapsed flyover. Photograph: Rupak De Chowdhari/ Reuters

The Bharatiya Janata Party has demanded a CBI inquiry into the collapse.

The police sealed the local office of the IVRCL and registered a case against the company under section 304,308 and 407 of the IPC.

Chief Secretary Basudeb Banerjee said that a high level inquiry has been ordered into the flyover collapse. 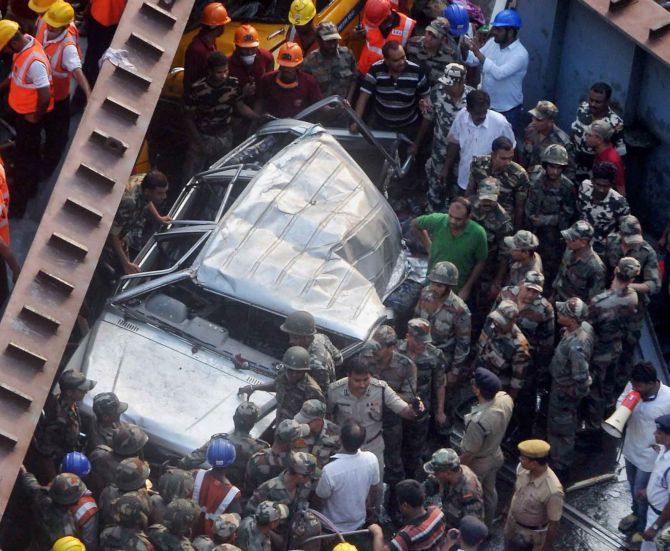 A number of vehicles were crushed under the concrete and steel debris.

CCTV footage showed people, cars, autorickshaws and hawkers buried under the collapsed structure, while some trying to flee the spot were also trapped.

The footage also caught a bloodied hand from under a girder gesturing for help as people handed over water bottles to survivors trapped underneath. 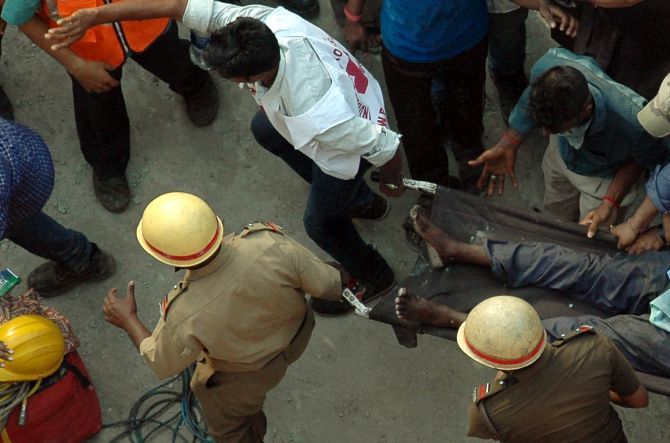 IMAGE: 82 people have been rescued so far from the debris. Photograph: Abhiroop Dey Sarkar/Rediff.com

Five columns of Army personnel (about 300 in number) along with NDRF, state disaster management, city police and fire brigade personnel joined in the rescue operations.

Chief Minister Mamata Banerjee, who visited the spot cutting short her election campaign, said, "Stringent action will be taken against officials of the construction company and others involved." West Bengal Governor K N Tripathi, who visited the spot, sought a report of the incident from the state government.

Chief Minister Mamata Banerjee said, "The tender was passed during the erstwhile Left Front government and was given to Hyderabad-based IVRCL Construction," adding that the company had not provided the government details of the construction plan despite several reminders. IMAGE: Locals began to help dig out the people trapped under the tonnes of debris. Photograph: ANI/Twitter

Chief Secretary Basudeb Banerjee announced compensation of Rs five lakh to the kin of each of the dead, Rs three lakh to those injured seriously and Rs one lakh to those less injured.

"The government will bear all costs for the treatment of the injured," he said.

Construction of the 2.2 km-long flyover started in 2009 during the previous Left Front rule.

Huge cranes and other rescue vehicles were pressed into service to clear the debris and bring out the injured. 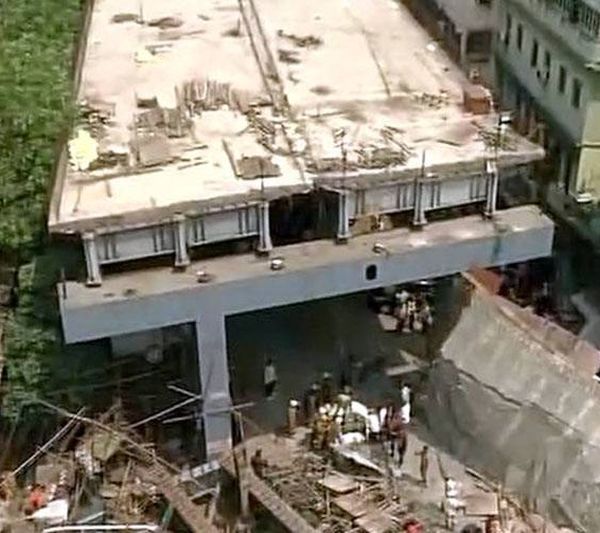 IMAGE: Over 22 people have already died in the collapse. Photograph: ANI/Twitter

A PTI correspondent, who was at the accident site, saw a number of severely injured persons lying in a pool of blood. At least a few persons were seen trapped under vehicles, concrete and heavy steel girders.

A roadside fruitseller Amzad Hussain said the incident took place at around 12.10 PM.

"It appeared that the whole sky came down. The sound was deafening and the whole area was trembling. Initially I thought it was an earthquake. In fact, seeing people running helter skelter I ran away from my shop and as I found a massive dust swirling in air, I realised that the bridge has collapsed," Amaz said. 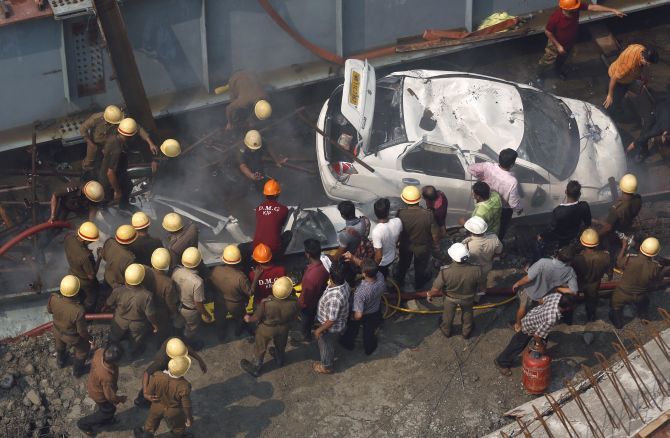 The Army has sent ten ambulances along with its complement of medics to the spot.

A team of engineers from the Army has also reached the spot with cranes, water bowsers, gas cutters and specialist equipment to help the civic authorities dismantle the debris.

General Officer in Command of Army's Bengal area Lt Gen Rajeev Tewary is at the spot of accident and taking stock of the situation.

Defence Minister Manohar Parrikar directed the armed forces to provide all assistance in relief and rescue operations in the flyover collapse.

"Defence Minister expresses his shock at Kolkata flyover collapse and grief on loss of lives. Directs armed forces to provide all needed assistance," a Defence spokesperson on Kolkata said. IMAGE: Several people are feared to be trapped as the bridge collapsed in peak hour traffic. Photograph: ANI/Twitter

"We feel that a CBI inquiry should be initiated into the incident to book the culprits. All the culprits, however big they may be, should be arrested. The state should request for a CBI inquiry. This incident is a clear case of rampant corruption regarding the construction of flyover," Union Minister Muqtar Abbas Naqvi said.

The Congress and the Communist Party of India-Marxist also demanded a high-level probe into the mishap.

CPI-M politburo member Md. Salim said that a high-level investigation should be carried out into the incident.

Echoing a similar demand, state Congress president Adhir Chowdhury said a probe should be ordered into the entire construction process.

Source: PTI© Copyright 2022 PTI. All rights reserved. Republication or redistribution of PTI content, including by framing or similar means, is expressly prohibited without the prior written consent.
Related News: Kolkata, Vivekananda Setu, ANI
Print this article 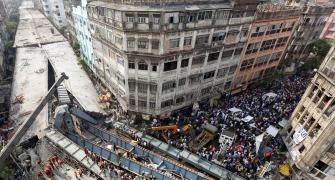 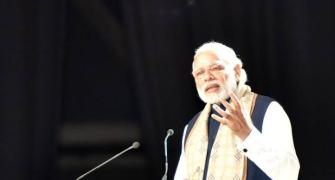 'Some neighbours' don't understand issues can be resolved peacefully: Modi 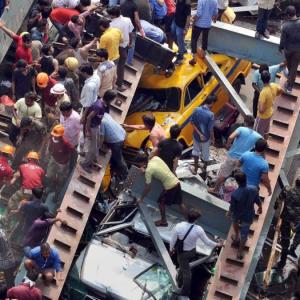 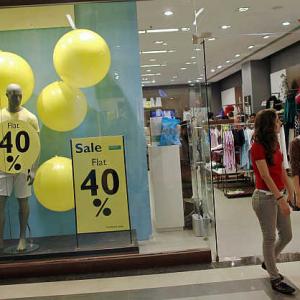