Devastated by a spell of torrential rains lasting over three days, claiming at least 28 lives, Bihar on Monday trudged towards normalcy with intensified
relief and rescue work in badly affected localities including the state capital. While people tried resuming normal business under an overcast sky, but weather department predicted fresh showers may lash the state any time.

The inundation of many parts of Patna, which has left residents scurrying for shelter,also saw Deputy Chief Minister Sushil Kumar Modi being 'rescued' by a State Disaster Response Force (SDRF) boat and Lok Janshakti Party chief Ram Vilas Paswan and his son Chirag Paswan putting up at a hotel instead of their house in a posh locality of the city.

Three fresh deaths caused by drowning were reported in the afternoon, one from Nawada and two from Jehanabad districts, raising the toll to 28. Unconfirmed reports however maintained that the number of casualties was far in excess of 30.

Chief Minister Nitish Kumar, accompanied by minister for water resources Sanjay Jha and Chief Secretary Deepak Kumar, conducted an aerial survey of the flooded areas before reviewing the situation across the state at a high-level meeting where he interacted with district-level officials through video conferencing.

A chopper of the Indian Air Force arrived in the city by noon, upon request from the state government, and commenced air-dropping of food and other relief material to people living in low-lying areas where water level is said to be several feet deep.

"Distribution of relief and rescue of stranded people will pick up speed on Tuesday as water would be flushed out with the help of pumps being brought here from Bilaspur. We are also gearing up to meet the challenge of infectious diseases that are known to strike water-logged areas", the chief secretary told reporters after the meeting.

Well-heeled people stood haplessly on the terraces or roofs of their houses, trying to catch packets that were dropped by the helicopter or hurled at them from boats ferried by the NDRF and the SDRF. "More than 200 personnel are involved in rescuing people from marooned localities and distribution of relief material to those stranded in inaccessible areas with the help of 36 boats which are plying through Patna", Commandant, NDRF 9th Battalion Vijay Sinha said.

"Across the state, 18 of our teams are working round the clock and have so far rescued more than 3,000 people," he added. Modi, who had been conspicuous by his absence at meetings and functions for the past couple of days, on Monday morning moved out of his Rajendra Nagar residence along with family members.

News channels beamed reports of the Deputy CM having 'been rescued' after remaining 'stranded' for three days. 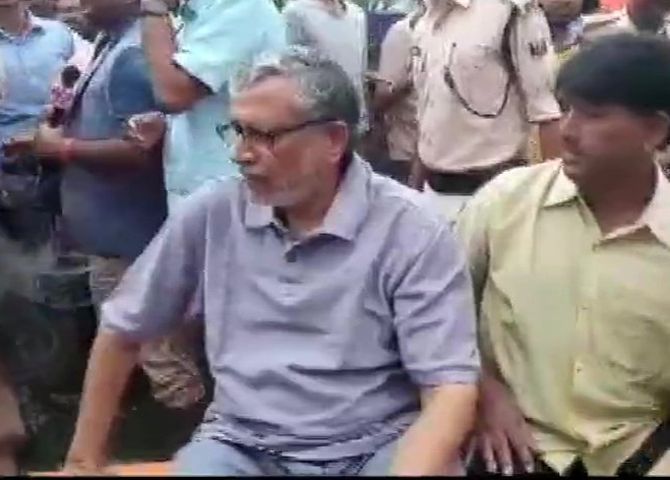 However, an official attached to him clarified 'it was not that the Deputy CM was helplessly marooned inside his own house. He had chosen not to venture out earlier since he did not wish the rescue teams to be disturbed and he had not anticipated that the rainfall would be so heavy that pumping water out of the streets may take several days'.

Wearing a T-shirt and shorts, the normally affable Modi appeared grim when he stopped for a few minutes at the Rajendra Nagar fly-over and left after issuing instructions to officials without taking any questions from a posse of prying journalists.

The Paswans, who have been here since Sunday, gave their Shri Krishna Puri house a slip and put up at a city hotel. IMAGE: An elderly person being rescued from a flood-affected colony at Rajendra Nagar in Patna. Photograph: PTI Photo

weather prevailing in the Bihar capital.

Commercial hubs like Fraser Road and Boring Road saw some of the shops being reopened after remaining shut for two days while the streets which are normally jammed with vehicles witnessed thinner than usual traffic though a definite improvement compared to the last couple of days when youngsters were seen playing volleyball right in the middle of the roads in ankle-deep water.

Chief Public Relation Officer of East Central Railway (ECR) Rajesh Kumar said in a release that route of some trains passing through Patna which was diverted via Kiul-Gaya section due to rain, has been restored back to its original route. Toll in rain-related incidents mounts to 148 in India

Several parts of Bihar and Uttar Pradesh were on Monday reeling from floods following incessant showers over the past few days, with the death toll in rain-related incidents mounting to 148 in the country.

The highest number of deaths 111 were reported from Uttar Pradesh.

The weather department has forecast a long delayed withdrawal of Monsoon and more rains for Bihar, including capital Patna. India recorded its highest rainfall this Monsoon since 1994, the India Meteorological Department (IMD) said classifying it 'above normal' as the season officially ended on Monday.

However, rain bearing winds still remain active over several parts of the country.

Of the 36 meteorological subdivisions of the IMD, two -- west Madhya Pradesh and Saurashtra and Kutch -- recorded precipitation in 'large excess'.

In Uttar Pradesh, since Thursday, 104 people have died in rain-related incidents, with the state government on Sunday cancelling leave of officials in view of the situation. 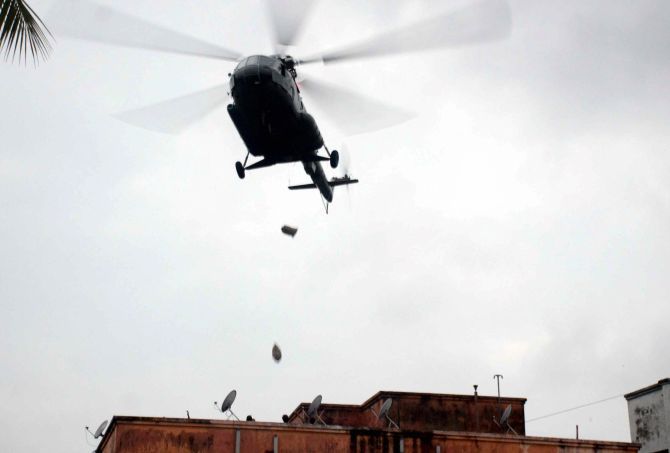 In Ballia authorities had to shift about 900 prisoners to other jails after flood waters entered the barracks of the district jail located near the Ganga river.

In Jharkhand, three members of a family died in Dumka district after a wall collapsed on them following heavy rains in the region.

Delhi may witness scattered rains over the next three to four days, according to the weather office.

In a year the rest of India witnessed 'above-normal monsoon', the city recorded the lowest rainfall since 2014 with a deficiency of 38 per cent, the IMD said.

With 10 per cent more rainfall than usual this year, India witnessed an 'above-normal' monsoon which officially ended on September 30, IMD data showed.

Besides these states, as many as 13 deaths were reported on Saturday from Uttarakhand, Madhya Pradesh and Rajasthan.

In the hill state of Himachal Pradesh, light to moderate rainfall occurred in most places since Sunday evening, bringing the maximum temperature down by a few notches, the meteorological department said.

In Gujarat, three women drowned after their car was swept away at a flooded causeway in Rajkot district on Sunday following heavy rains in several parts of the Saurashtra region. 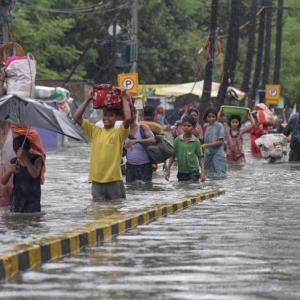 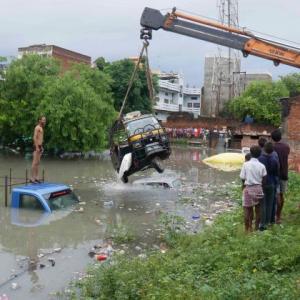