Time to rise to save country and democracy: Sonia Gandhi

Congress president Sonia Gandhi on Saturday said the Citizenship Amendment Act would "shred the soul" of India as she launched a scathing attack on 'Modi-Shah government' over the law, alleging their sole agenda was to make people fight to serve their politics, and vowed that her party would not retreat in its struggle against injustice. 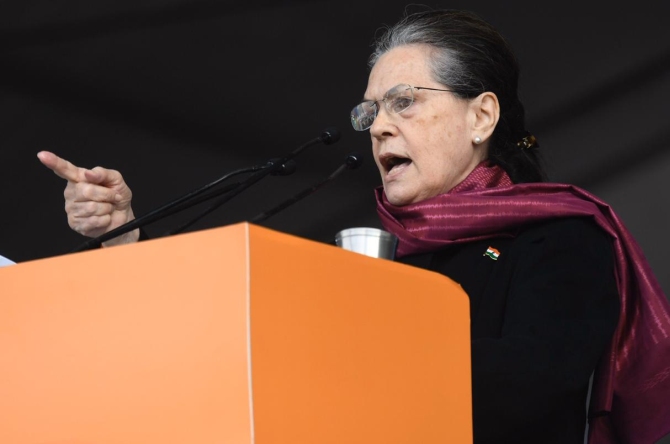 Addressing the party's mega "Bharat Bachao Rally" (Save India) at Ramlila Maidan, she also targeted the government over the economic situation and exhorted people to raise their voice to protect the country and its Constitution.

"The Congress and only Congress has always fought for people's rights. And today too, the Congress party is not going to retreat. Till our last breath, we will fulfil our duty towards protecting the country, democracy and the Constitution" she said.

"Andher nagri chaupat raja wala mahaul hai (confused leader, chaotic State)… kahaan hai sabka saath sabka vikas (where is 'with all, development for all'). What has happened to economy? Where are jobs?" she asked, hitting out at the government over the handling of economy.

The Congress chief said the situation in the country is serious as she highlighted the plight of women, farmers, labourers and the youth and asked party workers to struggle hard for protecting their rights.

"The greatest sin is to bear injustice. So raise your voice to the Modi-Shah government and tell them that we are ready to give any kind of sacrifice for the protection of democracy. And we are ready for any kind of struggle to protect the Constitution."

Talking about the new amended citizenship law, Sonia Gandhi said it has been on Bharatiya Janata Party's agenda for a long time now.

"They are not bothered that this new CAB law will shred the soul of India, as is happening in Assam and other northeastern states.

"It is for India's soul that our great nation builders and Babasaheb Ambedkar struggled hard, but I can say with confidence that our country's basic foundation does not allow such discriminatory actions. I assure you that the Congress will stand by all those against whom injustice is done," she said.

The Congress has been opposing Citizenship Amendment Act, alleging that it discriminates on the basis of religion.

Training her guns on Prime Minister Narendra Modi and Home Minister Amit Shah, the Congress chief on Saturday said, "Modi, Shah are not bothered about the Parliament nor do they care for Constitutional institutions. Modi and Shah have a single aim - they have a single narrow agenda. They only bother about politics. Their narrow agenda is 'Logon ko ladao, aur asli muddon ko chhupao' (Make people fight and hide the real issues)."

"It is our responsibility to come out of our homes and agitate against this. A time comes in the life of a nation and people that it has to take decisive steps. Today that time has come that to save the country, we have to struggle hard," Sonia Gandhi said at the rally which was attended former prime minister Manmohan Singh, her son Rahul Gandhi and daughter Priyanka Gandhi Vadra, besides other party leaders.

Asking people to rise against the injustice, she said, "There comes a time in the life of any person or society or country when you have to decide which side you're on, today is one such day. The time has come to struggle hard to save the country. It's time to rise to save democracy and Constitution."

She said unprecedented job losses are being witnessed and the youths face darkness. 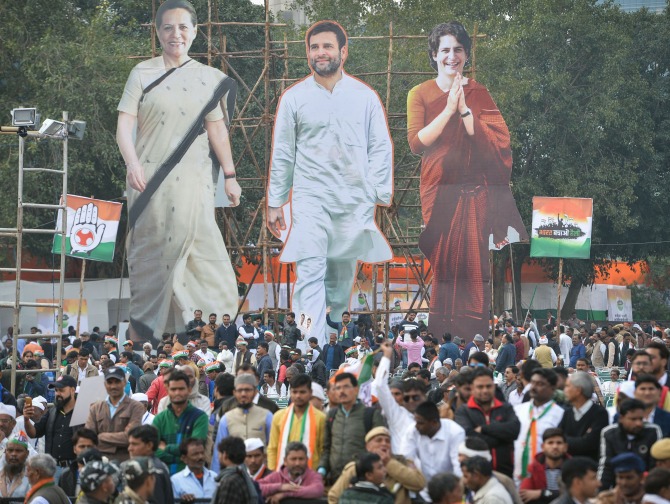 "I want to ask you whether you are ready to struggle for the bright future of our youths. I am deeply pained by the condition of our farmers. Their lives have become even more difficult. They don't get power, fertilizers, seeds in time and do not even get fair MSP. Are you ready or not for a struggle for justice to farmers or not?"

She said poor labourers are working hard but they are not getting even two square meals a day and normal families are unable to pay back bank loans and are forced to commit suicide. "Are we ready to struggle for them"

"I know what sacrifices women have to make to look after their families but basic commodities are out of their reach. We are shattered to see the kind of brutalities against women. Our heads hang in shame. Are we ready to struggle for the rights of our women or not," she asked.

She asked why there should not be a probe into where the black money is, for which demonetisation was done.

"Should there be a probe or not into GST revenues? Why is the treasury empty? Where is the money the government got after implementing note ban.

"Why are our navratnas being sold and to whom? And why is people's money not secure in banks. People cannot keep their money in their homes or in banks.

"Modi and Shah call these 'achche din'. The condition is such - implement anything you want; pass any legislation without debate; impose President's rule, they pretend to observe Constitution Day and everyday violate the Constitution," she alleged. 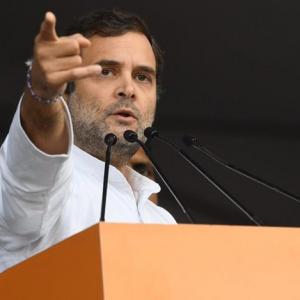 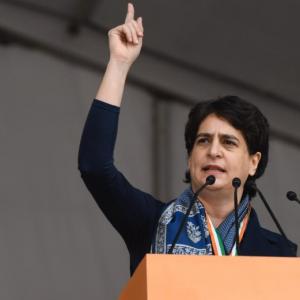