Americans, defying curfews in several cities including New York, Philadelphia, Chicago and Washington DC, protested, in some cases violently, against the custodial killing of African-American George Floyd in
Minneapolis. 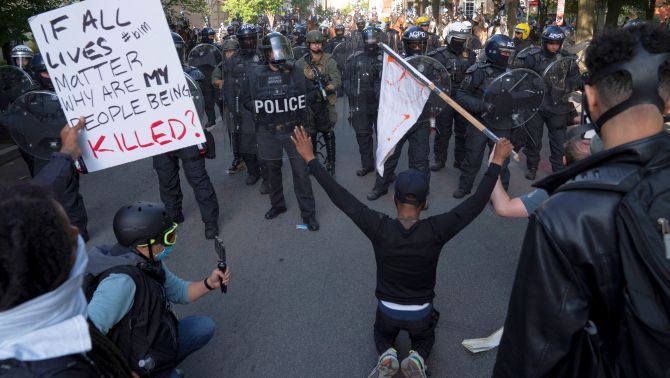 IMAGE: Protesters kneel in the street as riot police move on demstrators to clear Lafayette Park and the area around it across from the White House near the White House, in Washington. Photograph: Ken Cedeno/Reuters

Floyd's death on May 25 has sparked civil unrest that has since spread nationwide.

The 46-year-old, a native of Houston, was handcuffed and pinned to the ground on May 25 by a white police officer who kneeled on his neck as he gasped for breath.

In some cases, peaceful protests turned violent resulting in large scale looting, damage to properties and monuments, and vehicles being set ablaze.

The civic unrest is said to be the largest in the US in recent decades.

Curfew was imposed in several cities, including New York and Washington D C, as most protests turned violent during the night.

Reportedly, protesters defied curfew in many of these cities. 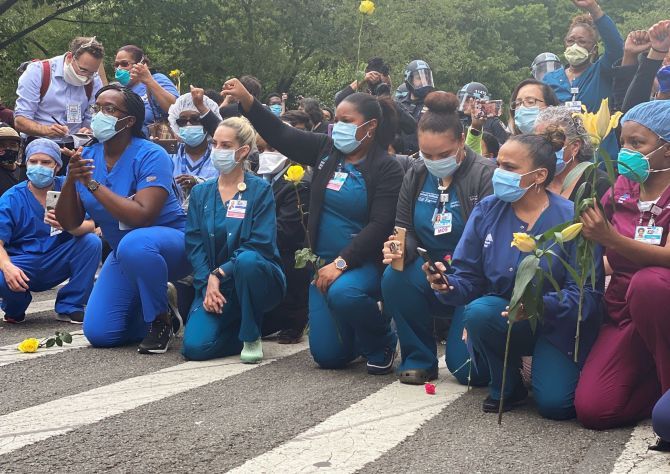 IMAGE: Healthcare workers kneel in solidarity with protesters rallying against the death in Minneapolis police custody of George Floyd in the Manhattan borough of New York City. Photograph: Aleksandra Michalska/Reuters

In Washington DC, military vehicles were seen on streets close to the White House and there was heavy deployment of armed security personnel at the Lafayette Park, where thousands had gathered to protest the death of Floyd, a native of Houston.

Thousands of people marched on the streets of New York against police brutalities.

The city, on Monday night, had witnessed looting, including that at a popular departmental store in midtown Manhattan.

"The New York Police Department and the (city) mayor did not do their job last night, I believe that," New York Governor Andrew Cuomo told a news conference. 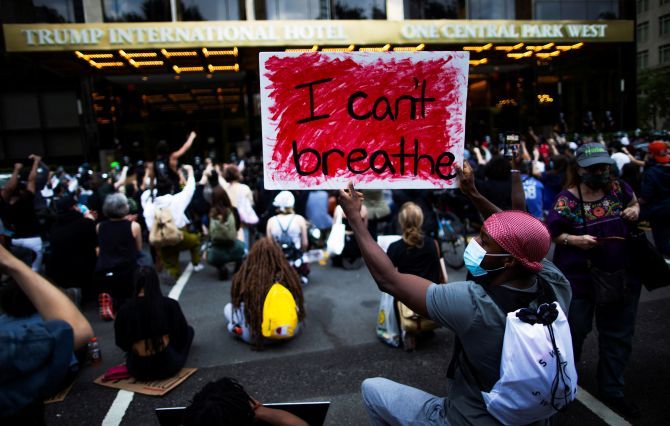 In St Louis, four police officers were hospitalised after they suffered serious injuries during a protest, while a police officer is said to be in critical condition in Las Vegas after he was shot while attempting to quell an unruly mob.

In Atlanta, Georgia, six police officers face criminal charges after a video captured them pulling two college students out of their car and firing tasers at them while enforcing curfew on Saturday night, according to media reports.

Several armoured vehicles formed a tight cordon around the Georgia Capitol after tear gas shells were fired on protesters to scatter them, according to the Atlanta Journal Constitution.

Confrontation between security personnel and protestors were reported from across the US, while Minnesota Governor on Tuesday ordered an investigate into the Minneapolis Police Department's policies and practices over the past decade.

New Jersey Attorney General Gurbir Grewal announced that the state will update its guidelines governing the use of force by police for the first time in two decades.

He also announced a mandatory statewide licensing programme for all officers. 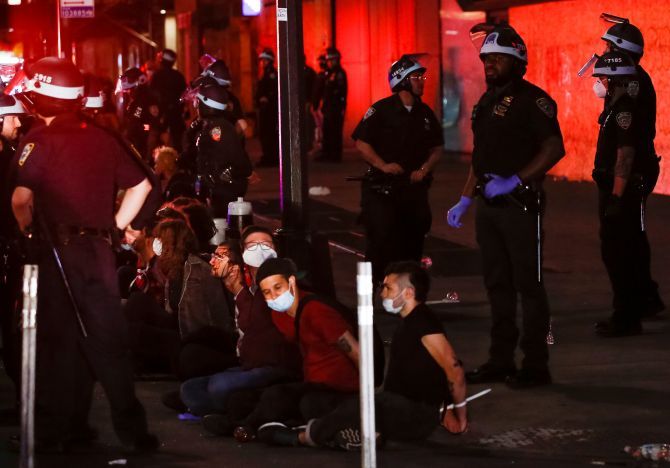 IMAGE: NYPD officers detain protesters for violating curfew during demonstrations in reaction to the death in Minneapolis police custody of George Floyd, in the Manhattan borough of New York City. Photograph: Eduardo Munoz/Reuters

Thousands rallied in Boston against the recent deaths of Black people across the country at the hands of people, a local newspaper said.

"The protesters, protected from cars by marshals in yellow vests, chanted, 'Black Lives Matter' and 'No Justice No Peace!' They then stood up and began marching through a park to rally peacefully at a large open area outside the Lemuel Shattuck Hospital," Boston Globe reported.

According to The New York Times, hundreds of protesters gathered steam for hours before converging at the corner of Hollywood and Cahuenga Boulevard, a Los Angeles landmark that in many ways is the heart of the city's film roots.

The Los Angeles Times reported that several hundred people have been arrested in the city.

In Washington DC, thousands of people remained in a park facing the White House in defiance of the curfew. 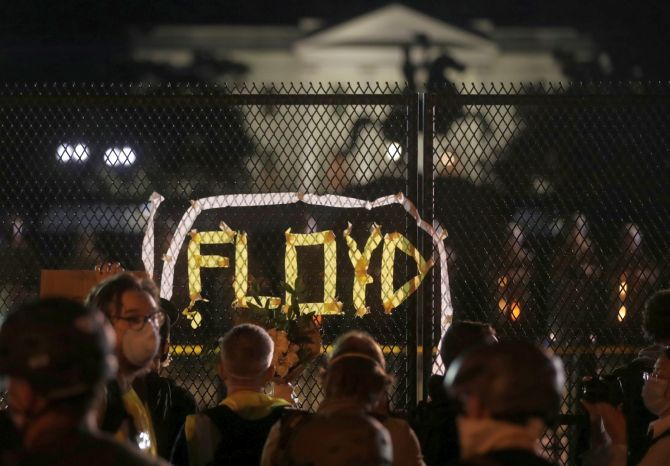 IMAGE: Demonstrators gather along the fence surrounding Lafayette Park outside the White House as protests continue over the death in police custody of George Floyd, in Washington. Photograph: Jonathan Ernst/Reuters

The Washington Post described it as the largest crowd since the protest started on Friday night. Senator Elizabeth Warren joined the protestors in Washington D C.

"Right now, America is raw. Her wounds are exposed. But instead of having a president who understands it, who empathises and acknowledges the pain, we have someone who chooses to hold up the Bible like a prop for a photo op after tear gassing peaceful protesters," the Indian-origin Senator said.

According to The Wall Street Journal, more than 20,400 troops have been deployed in 28 states and district of Columbia to maintain peace. 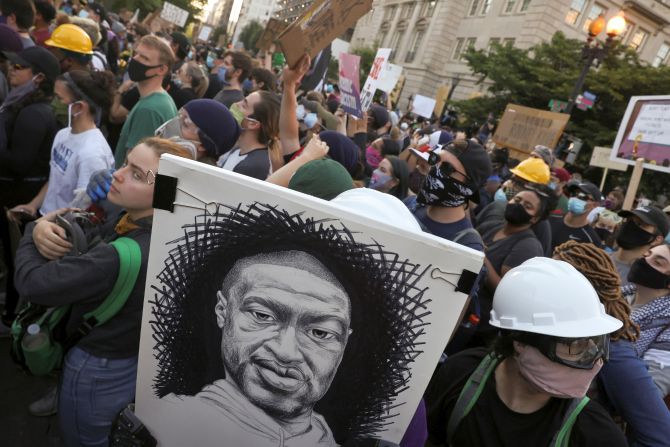 Meanwhile, a Chicago man was arrested on a federal arson charge for allegedly setting fire to a Chicago Police Department vehicle this past weekend.

Timothy O'Donnell placed a lit object into the gas tank of the marked police vehicle while it was parked in the 200 block of North State Street in downtown Chicago on Saturday, according to a criminal complaint and affidavit filed in US District Court in Chicago.

The vehicle ignited in flames. At the time, Chicago Police officers were in the area investigating reports of various malfeasances and unrest.

Similarly, in New Jersey, Justin Spry, 21, was arrested by FBI on charges of attempting to set fire to a marked police vehicle after a demonstration over the death of George Floyd in Minneapolis, Minnesota. 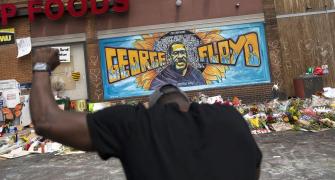 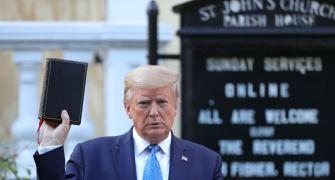 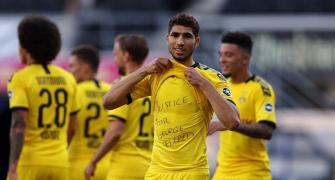 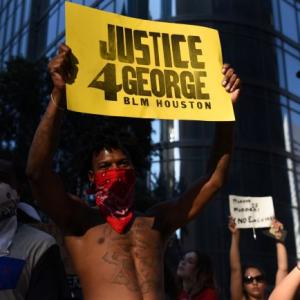 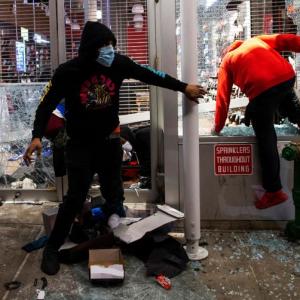