Five people have died, including an assailant, and 17 others were wounded in a shooting in the heart of Vienna hours before a coronavirus lockdown started, Austrian authorities said Tuesday. 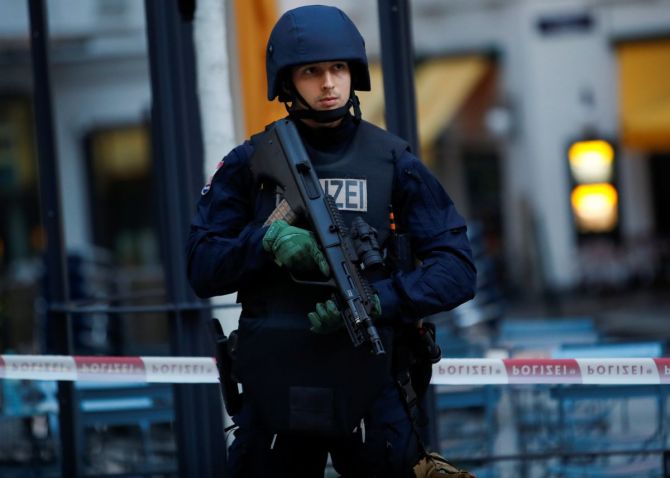 IMAGE: A police officer stands guard in fornt of a secured area after exchanges of gunfire in Vienna, Austria. Photograph: Leonhard Foeger/Reuters

Interior Minister Karl Nehammer said two men and two women have died from their injuries in the attack Monday evening. A suspected attacker, who was carrying an assault rifle and a fake suicide vest, was also shot and killed by police.

At least three people have died and several more have been injured in what the Austrian Chancellor Sebastian Kurz called a "repulsive terror attack" and said one gunman was also killed.

A huge manhunt was underway for multiple attackers armed with rifles following the horrific shootings, with the first near the synagogue reported at 8 pm local time. One attacker was shot dead by police with two civilians, one of them a woman, killed in the rampage. A police officer is also thought to have been shot and seriously injured.

Interior Minister Karl Nehammer told Austrian broadcaster ORF: "It appears to have been a terror attack."

He added that the perpetrators were 'heavily armed and dangerous' and the army had been asked to guard key locations in the city to allow police officers to pursue the attackers. "We have brought several special forces units together that are now searching for the presumed terrorists. I am therefore not limiting it to an area of Vienna because these are mobile perpetrators," Nehammer said, urging the public to stay indoors until the all-clear is given.

Austrian Chancellor Sebastian Kurz said: "It is of course a very tense security situation, especially in the federal capital Vienna. While we pursue them, they are very well equipped. So automatic weapons, very professionally prepared. It is definitely a terrorist attack.

"There are now 15 victims who are wounded and are currently being treated in the hospitals. There is a policeman who was shot - thank God, not in mortal danger. The situation is still relatively confusing.

"We can't really say anything about the background (to the attack). An anti-Semitic background cannot of course be ruled out, especially because of the location where this terrorist attack started.

"What we know for sure is that there are several suspects, one of whom has so far been eliminated, but some information is still on its way and the danger has therefore not yet been completely averted." 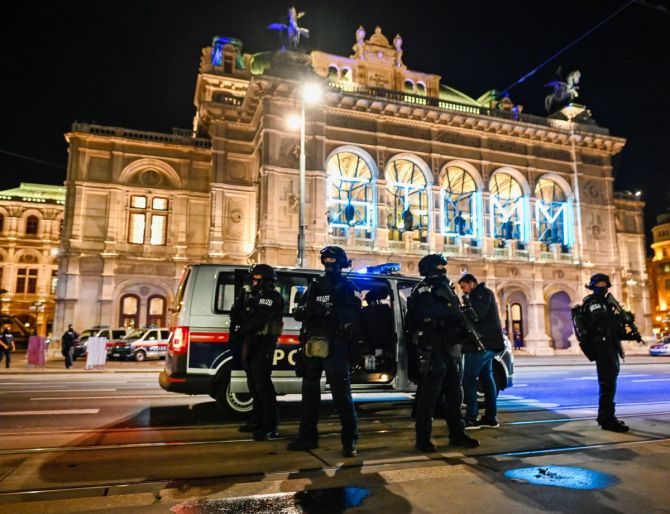 Police said the incident began near the Seitenstettengasse synagogue, which is the main temple in Vienna.

Jewish community leader Oskar Deutsch tweeted that the synagogue was closed at the time the attack began.

World leaders condemned the attack, with French President Emmanuel Macron saying that Europe must not "give up" in the face of attacks.

Macron wrote on Twitter: "We French share the shock and grief of the Austrian people struck this evening by an attack in the heart of their capital, Vienna. After France, a friendly country is attacked. This is our Europe. Our enemies must know who they are dealing with. We will not give up."

While denouncing the "cowardly act", Charles Michel, president of the European Council strongly condemned the attack. "Europe strongly condemns this cowardly act that violates life and our human values. My thoughts are with the victims and the people of #Vienna in the wake of tonight's horrific attack. We stand with Austria," the EU chief wrote on Twitter. IMAGE: Police officers aim their weapons on the corner of a street after exchanges of gunfire in Vienna, Austria. Photograph: Lisi Niesner/Reuters

United Kingdom Prime Minister Boris Johnson also condemned the attack saying, "I am deeply shocked by the terrible attacks in Vienna tonight. The UK's thoughts are with the people of Austria - we stand united with you against terror."

UN spokesperson Stephane Dujarric said in a statement: "The Secretary-General is following with utmost concern the still-evolving situation in Vienna's city centre where violent attacks in several places have been reported today."

The Secretary-General has strongly condemned the attacks and reaffirmed the solidarity of the United Nations with the people and the Government of Austria, the spokesperson said. 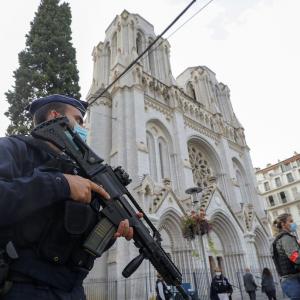