Two Indians were among 39 people killed in a terror attack at a night club in Turkish city of Istanbul during New Year's celebrations in which at least 70 others were injured. 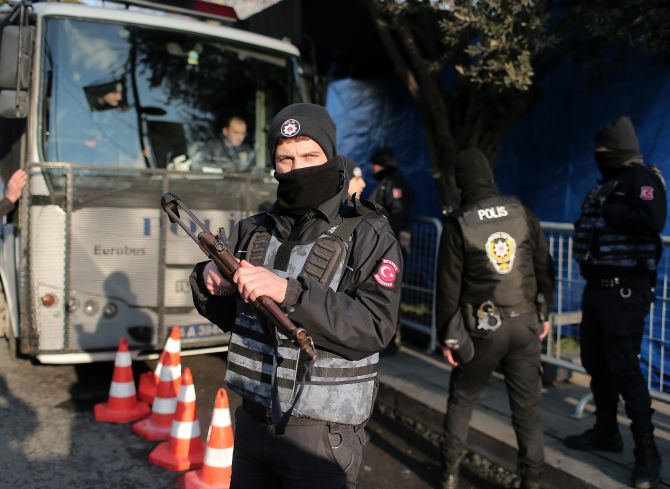 IMAGE: Turkish police stand guard outside the Reina nightclub by the Bosphorus, which was attacked by a gunman, in Istanbul. Photograph: Huseyin Aldemir/Reuters

The deceased Indians are identified as Abis Hasn Rizvi, son of former Rajya Sabha MP and noted builder of Bandra in Mumbai Akhtar Hasan Rizvi, and Khushi Shah from Gujarat.

Confirming the deaths, External Affairs Minister Sushma Swaraj tweeted, "I have a bad news from Turkey. We have lost two Indian nationals in the Istanbul attack. Indian Ambassador is on way to Istanbul.

"The victims are Mr. Abis Rizvi son of former Rajya Sabha MP and Ms. Khushi Shah from Gujarat. Abis Rizvi was CEO of Rizvi Builders and had produced a number of films including the 2014 movie Roar: The Tigers of the Sundarbans," she said. 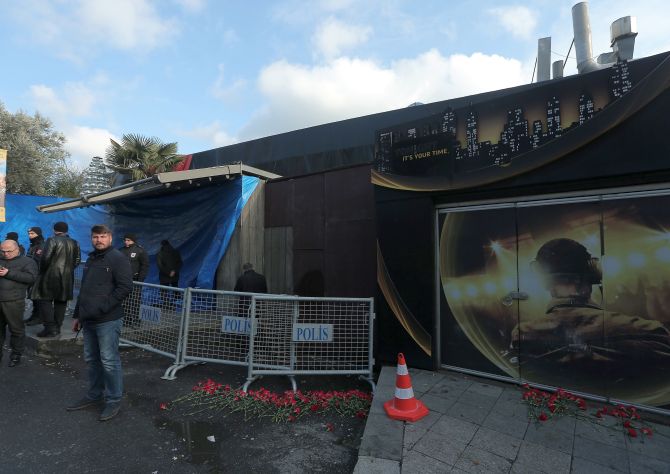 "Heartfelt condolences to the government and people of Turkey on the tragic loss of lives in Istanbul," he tweeted. 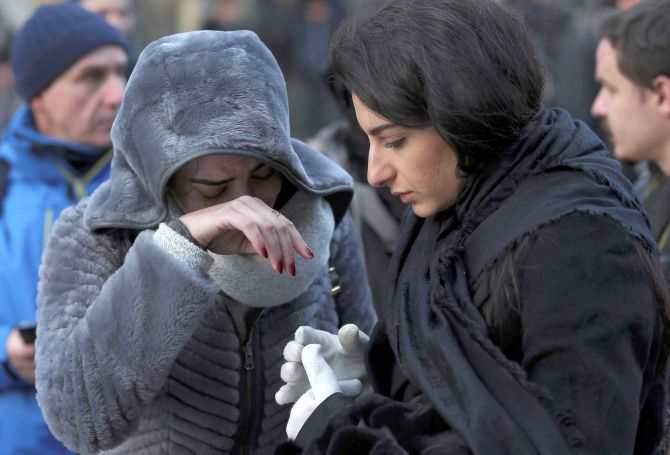 IMAGE: Women who survived an attack by a gunman, react outside the club. Photograph: Huseyin Aldemir/Reuters

The two Indians were among 15 foreigners who have been killed when a gunman went on a rampage at the waterside Reina nightclub where revelers were celebrating the New Year.

Nightclub owner Mehmet Kocarslan Turkey’s Hurriyet news site that security at the venue had been increased over the past 10 days following warnings from American intelligence officers. 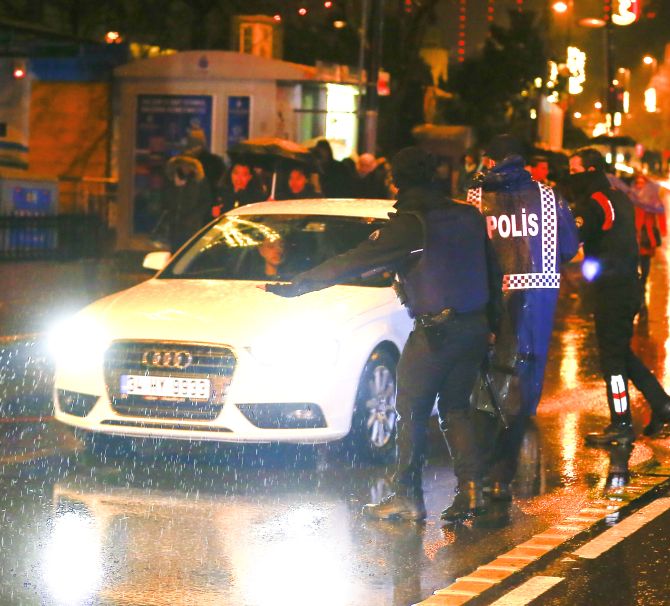 Turkish Interior Minister Suleyman Soylu said the attacker escaped and security forces have launched a major manhunt to nab him while expressing the hope he will be caught soon.

Soylu said 20 victims have been identified so far out of which 15 were foreigners and five were Turks.

At least 70 wounded people have been admitted to hospital. 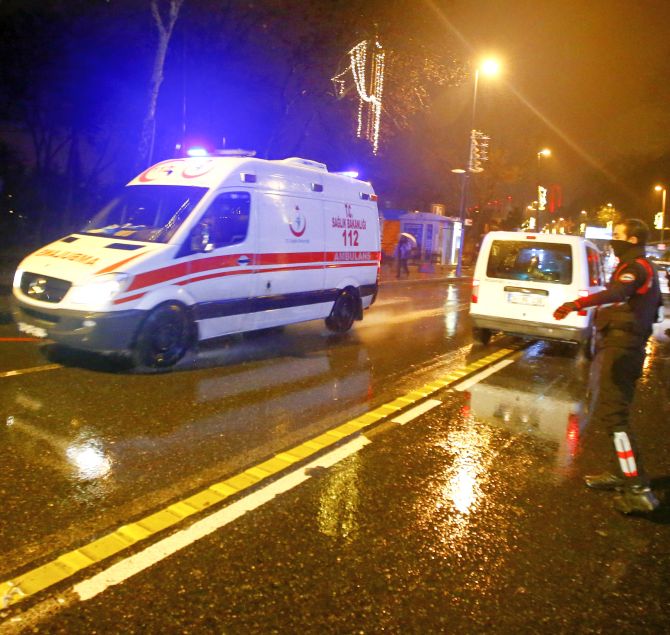 "This was a massacre, a truly inhuman savagery. A manhunt for the terrorist is under way. Police have launched operations. We hope the attacker will be captured soon," Soylu said.

"Our security forces have started the necessary operations. God willing he will be caught in a short period of time," he added.

Private NTV news channel said the assailant entered the upscale nightclub, on the shores of the Bosporus, on the European side of the city, dressed in a Santa Claus outfit.

Eyewitness Sinem Uyanik said she saw several bodies inside the Istanbul nightclub that was attacked during New Year's celebrations.

Her husband Lutfu Uyanik was wounded in the attack. 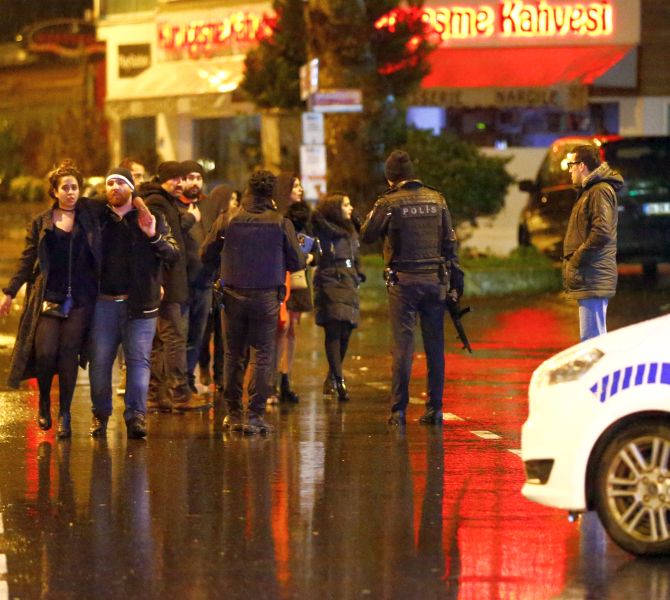 “Before I could understand what was happening, my husband fell on top me,”she said outside Istanbul's Sisli Hospital.

“I had to lift several bodies from on top of me before I could get out.”

After a year that has seen a run of deadly attacks in Turkey, security was tight across Istanbul and other major cities. Around 17,000 officers were on duty in the city, some of whom were themselves disguised as Santa Claus, according to the Anadolu news agency. 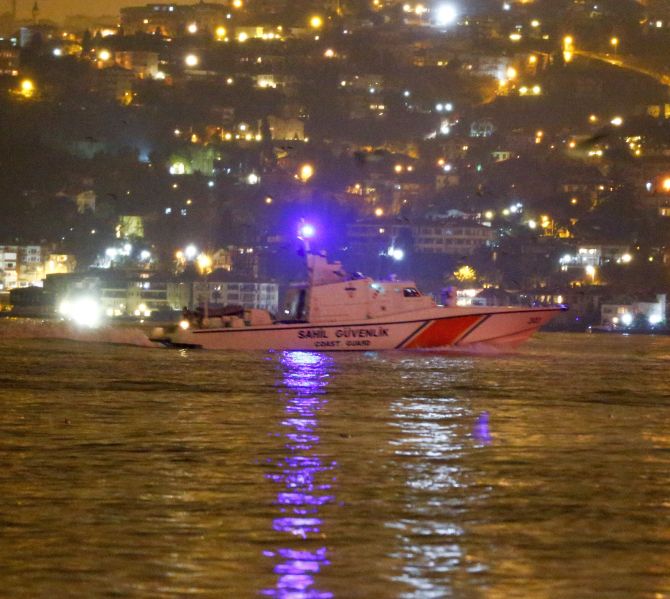 IMAGE: A police boat patrols the Bosphourus near a nightclub where a gun attack took place. Photograph: Osman Orsal/Reuters

Police with riot gear and machine guns backed up by armored vehicles blocked the area close to the Reina nightclub, one of the most popular night spots in Istanbul. Several ambulances flashing blue lights arrived on the scene, some taking wounded to hospitals.

With input from agencies 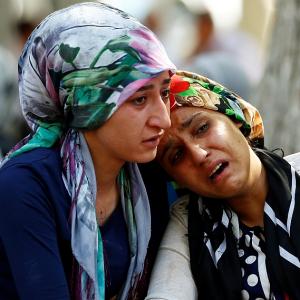 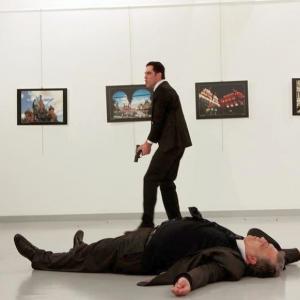