The project, considered a boon to the southern state, will provide irrigation facility for two crops in a year to 45 lakh acres, the state government said, adding it will supply 40 TMC of water to the ambitious Mission Bhagiratha drinking water supply project.

It will also help in supplying drinking water to one crore population in Greater Hyderabad on a daily basis, as also 16 TMC of water to thousands of industries in the state, it said.

The KLIP also throws open opportunity for hydel power generation in the state.

The inauguration ceremony was preceded by Rao and his wife Shobha participating in a 'Yagam' at the Medigadda site, where Vedic pundits from the Sringeri Peetham performed various rituals.

Rao also inaugurated a pump house under the project at Kannepalli where the water from river Godavari, which originates in Maharashtra, flows through Telangana before merging with the sea in Andhra Pradesh.

"It (the project) will change the face of Telangana," Fadnavis said. Prime Minister Narendra Modi has directed "us that there should be cooperative federalism and the two states... Telangana and Maharashtra have cooperated, collaborated. I am very happy at a record speed Telangana could complete this," Fadnavis said.

The Telangana government said 139 MW maximum capacity pumps, which were never used anywhere in the world, were utilised.

The other highlights of the project include the world's longest tunnel route of 203 kilometres.

It is the only project in the world which can lift two TMC of water every day, the government said.

Efforts are on to lift three TMC of water from next year, it said.

"This is also for the first time that water from Godavari river is lifted in phases from 92 metres height for supply of water to the farmland, taking it up to 618 metres height," the state government said.

The Chandrasekhar Rao-led government entered into an agreement with the Maharashtra government on March 8, 2016, putting an end to differences for decades over the issue, and paving the way for the project's construction at Medigadda.

Rao laid foundation stone at Kannepally for the project on May 2, 2016. 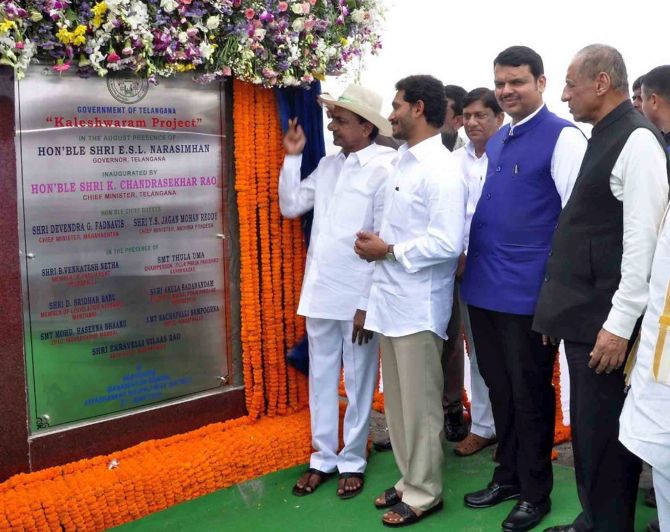 IMAGE: KCR with Jagan, Fadnavis and governor ESL Narasimhan at the inauguration of the Kaleshwaram Lift Irrigation Project. Photograph: snapsindia

Meanwhile, the ruling TRS and opposition Congress have been engaged in a war of words on the project with Congress Legislature Party leader M Bhatti Vikramarka alleging that irregularities took place with regard to the project.

He alleged Thursday that the project is being inaugurated in a hurry without even 15 per cent of it being completed.

Vikramarka said Sunday last that the project was originally initiated as B R Ambedkar Pranahita-Chevella project when late Y S Rajasekhara Reddy was the chief minister in undivided Andhra Pradesh at a cost of Rs 38,000 crore and added that Rs 10,000 crore was spent during the Congress regime.

However, the TRS government re-designed the project and increased the estimated cost to more than Rs 1 lakh crore, re-naming it Kaleswaram project, he said.

"Thus, crores of rupees of public money was misused," he added.

Rao, however, has dismissed Vikramarka's attack, without taking his name, saying the comments were irresponsible. The Congress did not do much despite being in power for decades, he alleged.

The BJP took exception to Rao's comments that the NDA government had not provided any funds to the project. State BJP president K Laxman Wednesday said the project would not have been possible without the cooperation of the Centre and Maharashtra.

Meanwhile, Megha Engineering and Infrastructure Limited, which completed the project in just three years, said it is the largest lift scheme in the world.

"This is by far the first of its kind and the largest lift scheme in the world. The project requires 7,152 MW of electricity to pump 3 TMC of water daily. In the first phase, 4,992 MWs of electricity is being used for pumping 2 TMC of water," MEIL director B Srinivas Reddy said.

Till date, the biggest lift schemes in the world were the Colorado lift scheme in America and the Great Manmade River in Egypt. The capacities of these schemes are in horsepower and took over three decades for completion. Now, the Kaleshwaram project, an Indian version has become one of the world's biggest in terms of capacities, a MEIL press release said. 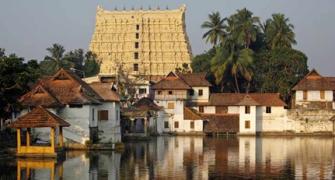 The temple and the dam 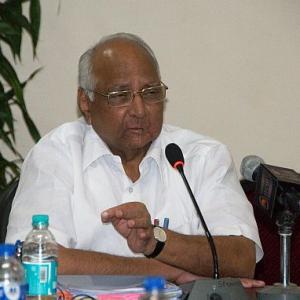