Prime Minister Narendra Modi on Thursday had a series of bilateral meetings, including discussions with his Bangladesh counterpart Sheikh Hasina and Seychelles President Danny Faure on the sidelines of the multilateral Commonwealth Heads of Government Meeting in London.

“Neighbourhood first! Connecting with a neighbour and a close friend, PM Narendra Modi and Prime Minister of Bangladesh Sheikh Hasina had a productive exchange of views on various issues of bilateral interest on the sidelines of CHOGM 2018,” ministry of external affairs spokesperson Raveesh Kumar tweeted. 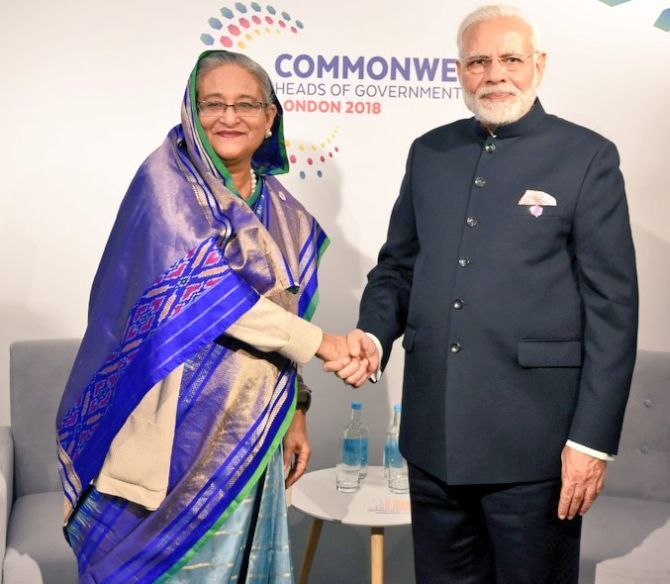 This marked their first meeting since the Bangladeshi leader’s visit to New Delhi last year and ahead of her proposed visit to India in the coming months.

The ministry of external affairs later said the two leaders discussed the developmental cooperation between India and Bangladesh, and also ways to implement decisions taken during earlier meetings between the two prime ministers.

Modi also met Seychelles President Faure and discussed cooperation in areas of trade and investment and other bilateral issues, he said.

The bilateral talks between Faure and Modi assumes significance after Seychelles ordered an inquiry into the leak of a highly classified agreement signed with India to develop infrastructure on Assumption Island, which lies southwest of the mainland of Mahe. The opposition in Seychelles has decided not to ratify the pact because of Assumption’s relative proximity to Aldabra atoll, a UNESCO World Heritage Site that is home to the world’s largest population of giant tortoises. 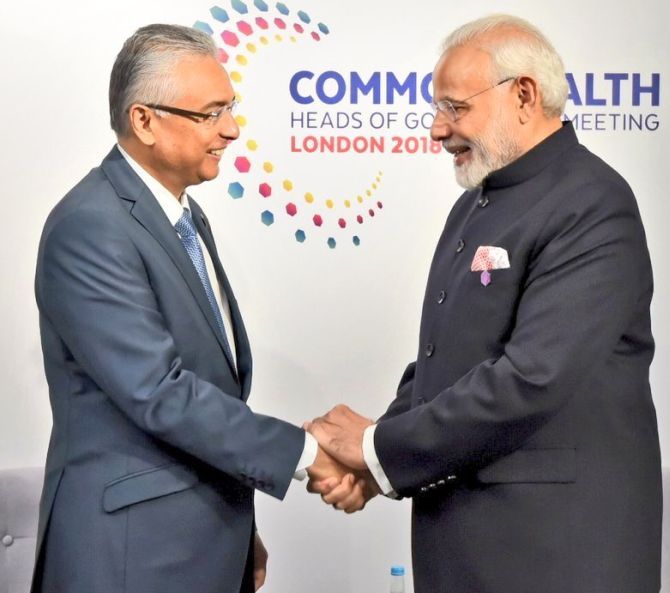 Some of the other world leaders expected to have one-on-one deliberations with Modi during the summit include South African President Cyril Ramaphosa, Cyprus President Nicos Anastasiades, and Jamaican Prime Minister Andrew Michael Holness.

“The summit offers ample opportunity for leaders to interact in meeting rooms for bilateral discussions on matters of mutual interest as well as cooperation over Commonwealth issues,” a senior official said.

Officials had earlier indicated that no meeting has been requested or scheduled with Pakistan Prime Minister Shahid Khaqan Abbasi and later confirmed there was no interaction between the two.

The bilateral talks took place as the formal heads of government meeting got underway in London on Thursday, following a formal launch by Queen Elizabeth II at Buckingham Palace.

Prime Minister Modi was scheduled to address the second plenary meeting of the heads of government during the closed-door executive session of CHOGM. 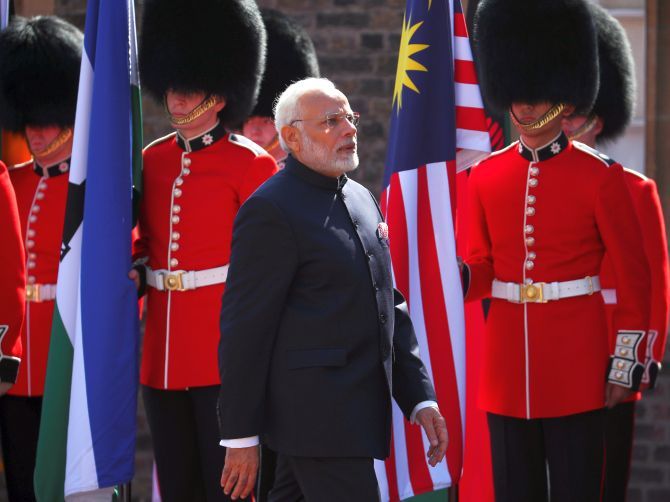 IMAGE: Modi arrives to greet Britain's Prime Minister Theresa May ahead of a working session at the Commonwealth Heads of Government Meeting in London. Photograph: Hannah McKay/Reuters

At the launch of the CHOGM executive session at Lancaster House open to the media, British Prime Minister Theresa May said: “The great strength of the Commonwealth is that all our members have equal status, an equal voice, and an equal right to make that voice heard. So, as we tackle these challenges, I want to hear from everyone, and everyone will have chance to speak.

“We face many challenges in the world today. But the Commonwealth is a unique organisation and, at this summit, we have an opportunity to deliver lasting change that benefits all of our 2.4 billion people.”

Later in the evening, the 91-year-old monarch will host a dinner for all 53 heads of government at the palace later on Thursday evening.

“I had not been able to visit the last summit and this time, it was an honour that Prince Charles came personally to India last year to invite me for it. The Queen herself wrote a personal letter to me, a matter of great pride for India,” Modi had said during his Bharat Ki Baat, Sabke Saath diaspora event in London on Wednesday evening. IMAGE: Britain's Prime Minister Theresa May and India's Prime Minister Narendra Modi applaud during the formal opening of the Commonwealth Heads of Government Meeting in the ballroom at Buckingham Palace in London. Photograph: Dominic Lipinski/Pool/Reuters

An Indian Prime Minister is attending CHOGM, held every two years, after a hiatus of nearly a decade, having skipped CHOGMs in Perth, Colombo and Malta since 2009. The Indian government has said that this symbolises the country’s wider efforts to step up its role across global forums.

The executive session of the summit on Thursday will be followed by a retreat at Windsor Castle on Friday, when the leaders get together in an informal setting without any pre-set agenda or being accompanied by their usual coterie of civil servants and advisers.

The summit concludes on Friday, when leaders will issue their communique and a leaders’ statement after their retreat.

CHOGM takes place every two years in different Commonwealth countries, with the next host country also to be announced at the end of this summit.

Following the retreat, Modi will head back to India after a brief stop for his meeting with German Chancellor Angela Merkel in Berlin. 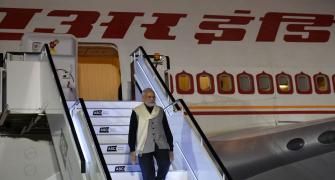 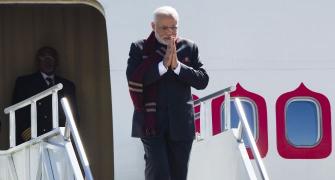 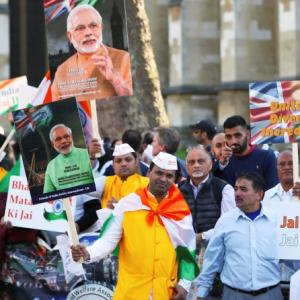 PHOTOS: How PM Modi was greeted in London 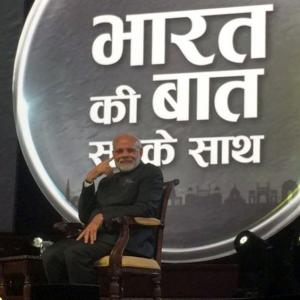 'A rape is a rape, don't politicise such issues'