Science must meet rising aspirations of our people: PM 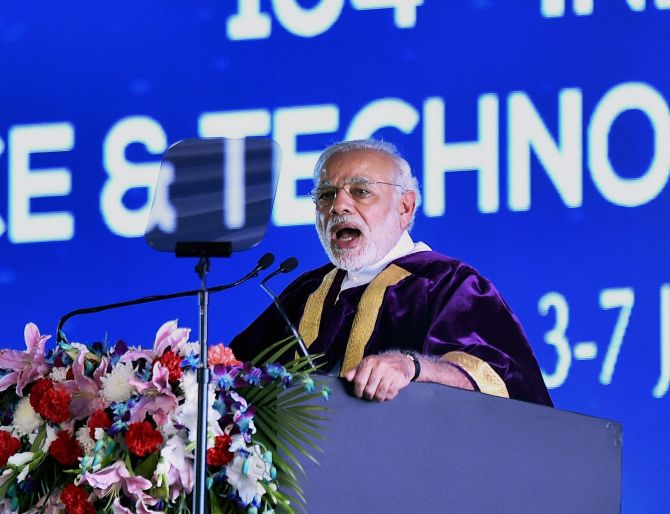 Modi also exhorted scientists to keep an eye on the rise of disruptive technologies and leverage them for the country's growth, as he pledged government's commitment to support different scientific streams with emphasis on innovations.

Noting that the rapid rise of cyber physical systems has the potential to pose unprecedented challenges and stresses to India's demographic dividend, Modi emphasised on the need to develop an inter-ministerial mission in this area to secure the nation by creating basic R&D infrastructure, man power and skills.

"On the lines of corporate social responsibility, the concept of scientific social responsibility needs to be inculcated to connect our leading institutions to all stakeholders, including schools and colleges. We must create an environment for sharing of ideas and resources," the prime minister said in his inaugural address at the 104th session of the Indian Science Congress in Tirupati.

Noting that the brightest and best in every corner of India should have the opportunity to excel in science, Modi said that this will ensure our youth get high-end training exposure to the best of science and technology to make them job-ready in a competitive world.

"To this end, I would exhort the national laboratories to connect with schools and colleges to develop appropriate training programmes. This will also help with the effective use and maintenance of our vast scientific and technological infrastructure.

"Laboratories, research institutions and universities in each major city region, should be interlinked to function on a hub and spoke model. The hubs will share major infrastructure, drive our national science missions and be the engines that link discovery to application," he said.

The prime minister said that college teachers with background in research can be connected to the neighbouring universities and R&D institutions. "Outreach activities from the institutions of eminence to schools, colleges and polytechnics will activate the latent science and technology manpower from the educational institutions in your neighbourhoods."

"Seeding the power of ideas and innovation in school children will broaden the base of our innovation pyramid and secure the future of our nation. As a step in this direction, ministry of science and technology is initiating a programme focused on students of classes 6 to 10," Modi said, adding, "The programme will scout, mentor, reward and showcase 10 lakh top innovative ideas focused on local needs from 5 lakh schools." 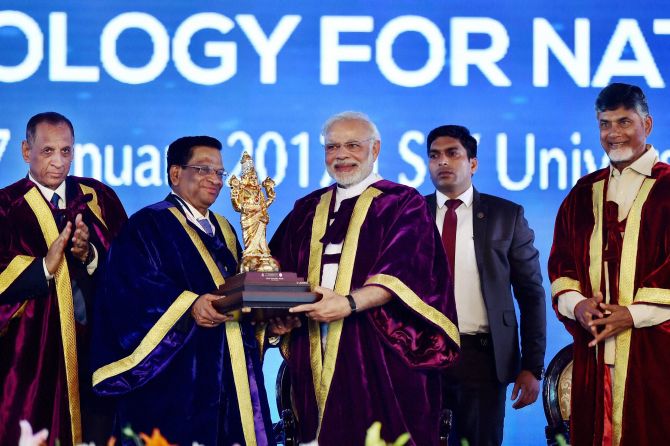 IMAGE: PM Modi being presented a memento as  Andhra Pradesh Chief Minister Chandrababu Naidu looks on during the function.

Referring to the rise of disruptive technologies, Modi said there is equally a need for the scientists to keep an eye on them and be prepared to leverage them for growth.

"One important area that needs to be addressed is the rapid global rise of cyber physical systems. This has the potential to pose unprecedented challenges and stresses to our demographic dividend.

But we can turn it into a huge opportunity by research, training and skilling in (fields like) robotics, artificial intelligence, digital manufacturing, big data analysis, deep learning, quantum communication and Internet of Things."

Modi emphasised on the need to develop and exploit these technologies in services and manufacturing sectors, in agriculture, water, energy, traffic management, health, environment, infrastructure and geo information systems; security; financial systems and in combating crime.

Noting that tomorrow's experts will come from investments made today in our people and infrastructure, Modi said that his government is committed to support different streams of scientific knowledge; ranging from fundamental science to applied science with emphasis on innovations.

"We are leveraging strategic international partnerships and collaborations based on the principles of mutuality, parity and reciprocity, to make Indian science globally competitive. We are also placing special emphasis on building strong relationships with our neighbouring countries and multilateral fora such as BRICS," he said.

Modi said the Technology Vision 2035 document, released in last year's Science Congress, is now developing into a detailed roadmap for 12 key technology sectors and even the NITI Aayog is evolving a holistic science and technology vision for the country.

The prime minister also emphasised on ease of doing science, and said India's ability to execute large transformational national missions required effective partnerships, which can only be ensured by getting out of deep rooted silos and adopting a collaborative approach.

"Our ministries, our scientists, R&D institutions, industries, start-ups, universities and IITs, all should work together seamlessly. In particular, our infrastructure and socio-economic ministries must make appropriate use of science and technology. Another empowering factor for scientific delivery is the ease of doing science. If we want science to deliver, we must not constrain it," Modi said.

Asserting that building a strong science and technology infrastructure accessible to academia, start-ups, industry and R&D labs tops is a priority of the government, Modi said it was important to address issues like the problems of ease of access, maintenance, redundancy and duplication of expensive equipment in scientific institutions. 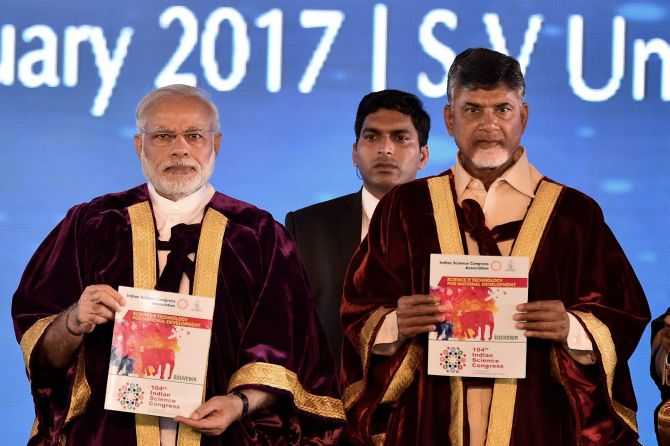 IMAGE: Prime Minister Modi releases a souvenir during the programme.

He said Indian institutions could consider inviting outstanding scientists from abroad including NRIs for long term research associations and should also involve foreign and NRI PhD students in post-doctoral research in our projects.

By 2030 India will be among the top three countries in science and technology and will be among the most attractive destinations for the best talent in the world. The wheels we set in motion today will achieve this goal, Modi said, adding that SCOPUS database indicates that India now ranks sixth in the world with respect to scientific publications, growing at a rate of about fourteen percent as against the world average growth rate of about four percent.

Science must meet the rising aspirations of our people, he said, asserting that problems of urban-rural divide and work for inclusive development, economic growth and employment generation must be addressed through it.

Seeking to make science and technology a strong tool of inclusive development and betterment of the weakest and poorest segments of our society, he said ministries, scientists, R&D institutions, industries, start-ups, universities and IITs, all should work together seamlessly.

"In particular, our infrastructure and socio-economic ministries must make appropriate use of science and technology," he said. 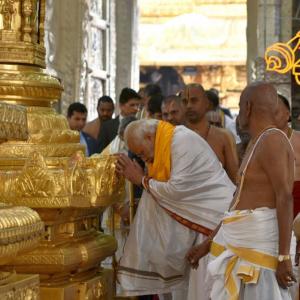