A man was found hanging at the Nahargarh Fort near the Rajasthan capital on Friday, with messages referring to the Bollywood epic drama Padmavati scribbled on nearby stones, a police official said. 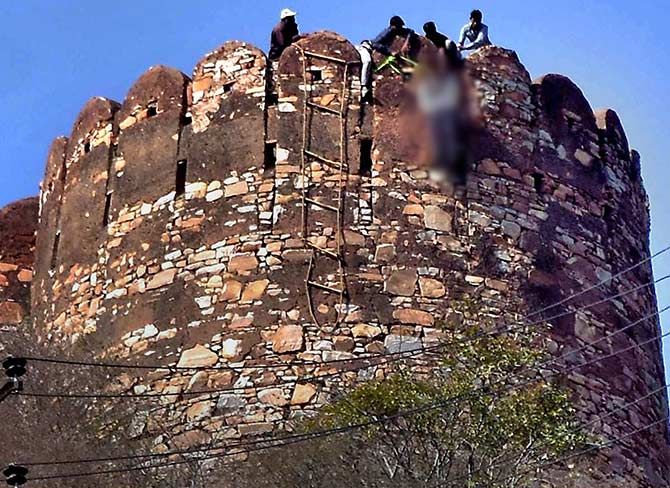 Chetan Kumar Saini, 40, a resident of Shastri Nagar and a handicraft worker, was found hanging from the boundary wall of the fort, Deputy Commissioner of Police, North Satyendra Singh said.

He said that messages was found scribbled on stones, but it was premature to connect the incident with Padmavati protests.

The body has been sent for post-mortem and further investigation into it is on, the police said.

An outfit representing the Rajput community, said it was not the way to protest.

President of Rajput Karni Sena, Mahipal Singh Makrana, said the messages on the stones were written to provoke the outfit.

“People are threatening us... Whatever is being done is wrong,” he said. IMAGE: 'Hum putle nahi jalate, latkate hain’ (we don’t burn effigies, we kill)' message scrawled on the rocks at the Nahargarh Fort where the body was found hanging. Photograph: ANI/Twitter

Padmavati has been facing the wrath of various Rajput groups and political leaders, who have accused the film’s director Sanjay Leela Bhansali of distorting history.

On November 22, protesters blocked the entry to the Chittorgarh Fort till 5 pm and burnt effigies of Bhansali.

The next day, locals led by the Rajput community blocked entry to the Kumbhalgarh Fort in Rajsamand district “for some time” demanding a ban on the film.

However, historians are divided on whether Padmini actually existed. She finds mention in the 16th century epic poem Padmavat. 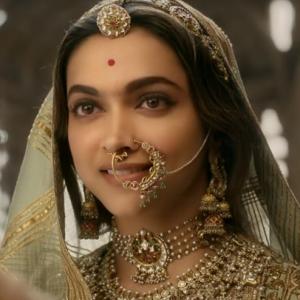