Torrential rains and the subsequent flooding claimed at least 10 lives in Mumbai and the neighbouring districts of Palghar and Thane since Tuesday, police said on Wednesday. 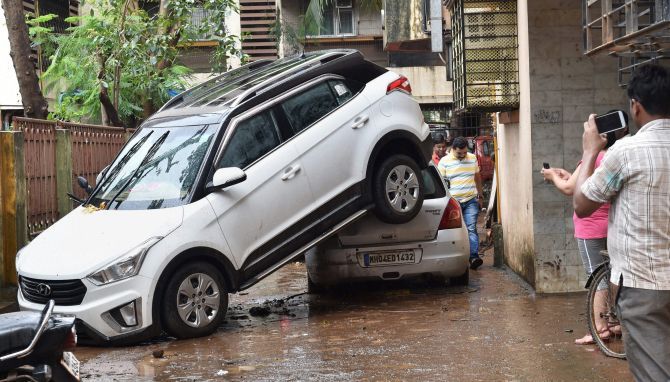 IMAGE: A car is seen piled over another, presumably after being drifted by flood-water during Tuesday's heavy downpour, at Shri Krishna Nagar in Borivali, Mumbai on Wednesday.
Photograph: PTI Photo

While nine persons were washed away in separate incidents in Mumbai and the two adjoining districts, another man lost his life in a wall-collapse incident in Ghatkopar in Mumbai.

"In Mumbai, the incidents were reported from Dahisar, Kandivli, Malad and Dadar areas," a senior police official said.

"While two people were washed away in nullahs and another in a drain, one got swept away during Ganesh idol immersion," he added.

"In another incident, a man named Rameshwar Tiwari was killed after the wall of a power sub-station fell on his house in Asalpha village in suburban Ghatkopar," police said.

His 35-year-old wife and nine-year-old son sustained injuries in the incident that took place in the early hours, they added.

Torrential rains pounded the metropolis throughout the day on Tuesday.

The Santacruz observatory of the India Meteorological Department registered 331.4 mm rainfall on Tuesday, the heaviest since the July 26, 2005 record of 944 mm, which had caused the worst havoc in decades in the city. 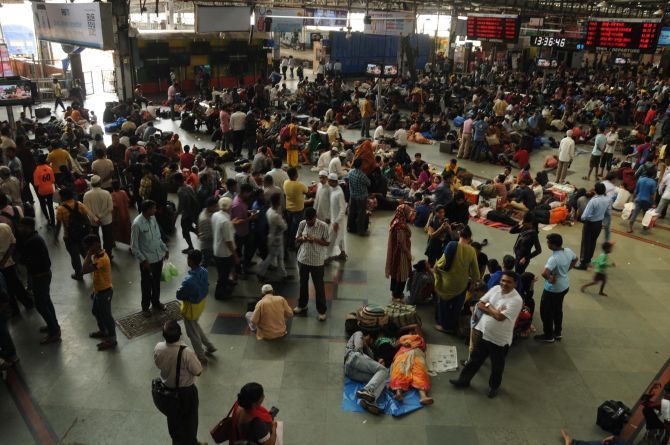 IMAGE: People were stranded at various railway stations as the suburban train services were suspended on all three lines.
Photograph: Sahil Salvi

In Palghar district, four persons, including a three-year-old girl, were washed away in separate incidents on Tuesday.

Out of the four, body of the minor girl has been recovered so far, Palghar police said.

The three-year-old victim was travelling on a motorcycle with her kin. When their vehicle reached Waghoba Khind, it skidded off and the girl fell into a nullah.

She was washed away and her body was recovered later, police said.

In another incident, a youth fell into a swollen nullah in Palghar town and got swept away by strong currents.

His body is yet to be recovered, they said.

Similarly, in separate mishaps in Virar and Vasai in the district, two persons fell into nullahs and were washed away.

"We are yet to recover their bodies," police said. 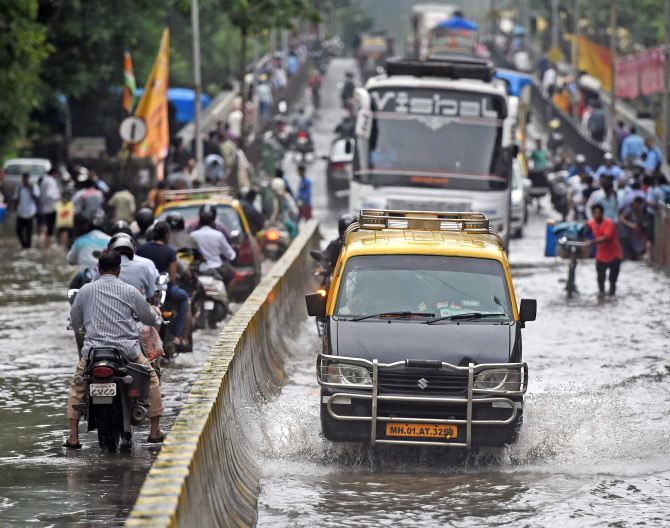 In Thane city, the body of a man was found in a nullah near Jail Talao around 9 am today, the regional disaster management cell said.

"The body was fished out and sent for a post-mortem. The victim, aged around 45, was later identified as Qureshi Rafiulla Atim Shaikh," the police said.

The civic chief on Tuesday blamed extreme weather conditions for water-logging on roads and railway tracks, saying the municipal machinery worked fine in the hour of crisis.

The megalopolis received around 320 mm rain on Tuesday, the heaviest on a single day since the July 26, 2005 record of 944 mm, which paralysed the city within a few hours.

The torrential rain plunged the city into chaos as water swamped homes, and submerged roads and railway tracks, leaving thousands of people stranded at various places.

He said the city received 320 mm rainfall on Tuesday. 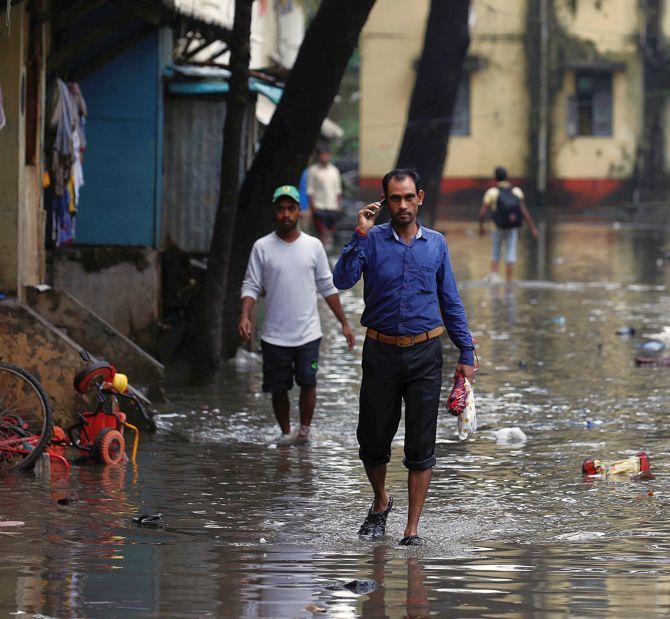 IMAGE: People came out of their houses after experiencing torrential rain on Tuesday. According to official figures, Tuesday's rain is the highest in a day in August since 1997. Photograph: Danish Siddiqui/Reuters

At 23 places, over 200 mm rainfall was received. The civic body's plan to tackle the situation and rescue the people worked quite well, Mehta claimed.

He said over 30,000 employees were pressed into service to handle the situation.

"They removed excessive water (from roads and rail tracks) and provided shelters to the stranded people who could not travel home," the civic chief said.

Mehta said the MCGM operated a total of 229 pumps to flush out water, while 420 people stranded on 12 trains were rescued by the fire brigade from four locations in the city.

Talking about the work done by the civic staff in providing overnight shelter to the stranded passengers, he said, assistant commissioners of the respective wards provided 69 night shelters in the vicinity of railway stations where around 5,000 people spent the night. 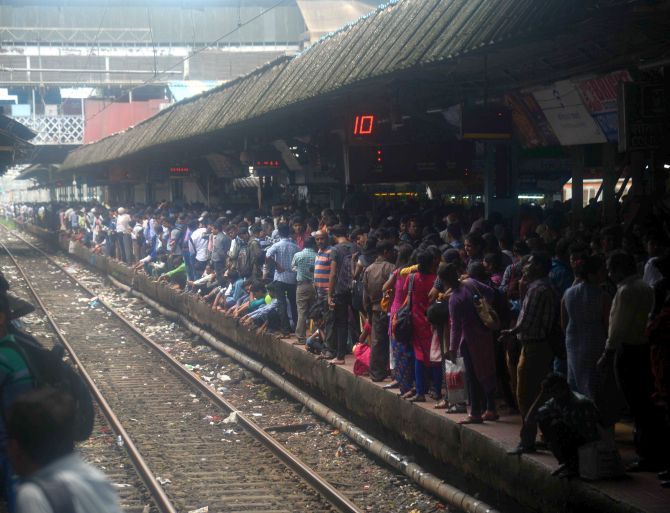 He said various agencies worked in coordination to tackle the yesterday's situation.

He appealed to citizens to seek medical assistance in case they experienced symptoms like fever or vomiting.

The civic chief said the MCGM had repaired 561 roads, cumulatively stretching up to 138 km, ahead of the monsoon this year. 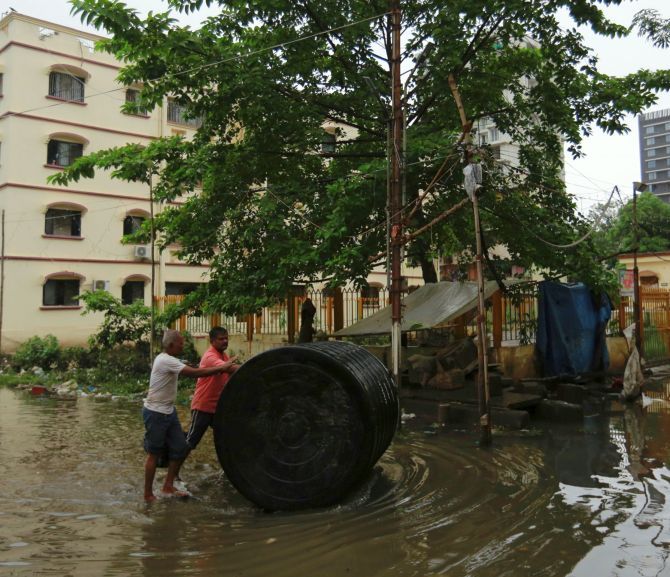 IMAGE: Schools and colleges have been asked to remain shut on Wednesday after the rains.
Photograph: Danish Siddiqui/Reuters

This is also the highest rainfall in a day in August since 1997.

The Colaba observatory of the IMD registered 110 mm of rainfall on Tuesday, it said.

"The precipitation measured between 8.30 am of August 29 to 8.30 am of August 30 revealed that Santacruz weather station has received 331.4 mm rainfall, while the Colaba observatory received 110 mm during the same period," the IMD said.

The neighbouring Thane city received 247 mm rainfall, while the downpour measured in Palghar was 280 mm, it said. 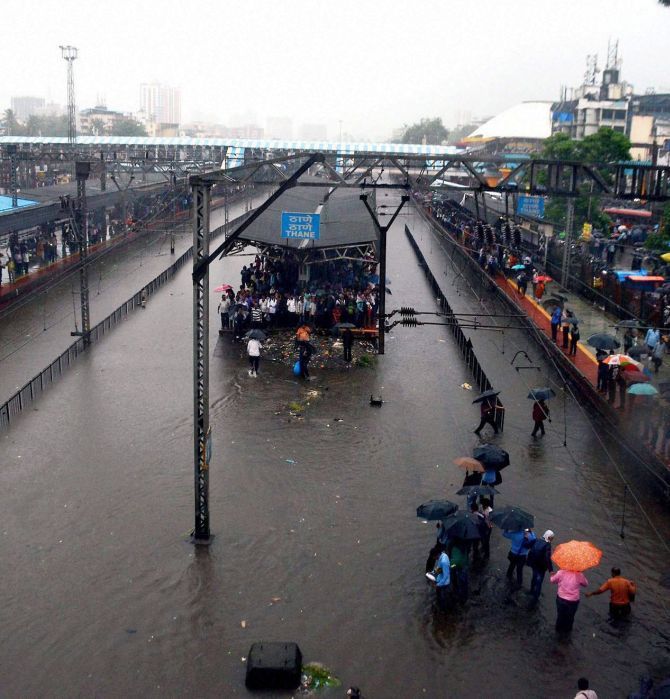 On Tuesday afternoon, the IMD had issued a forecast that Mumbai region would get more than 250 mm rainfall.

An IMD official said, "The depression over south Gujarat and Madhya Pradesh had brought more showers, but it got intensified as it received more moisture from the Arabian Sea."

The Shiv Sena, which controls the Mumbai civic body, accused the Bharatiya Janata Party, its alliance partner in the state government, of taking 'undue credit' for the relief work being carried out by the Uddhav Thackeray-led party.

A Yuva Sena functionary has tweeted a photo claiming that the BJP has 'photoshopped' the Sena's name to take 'undue credit' for the relief work being done by his party. 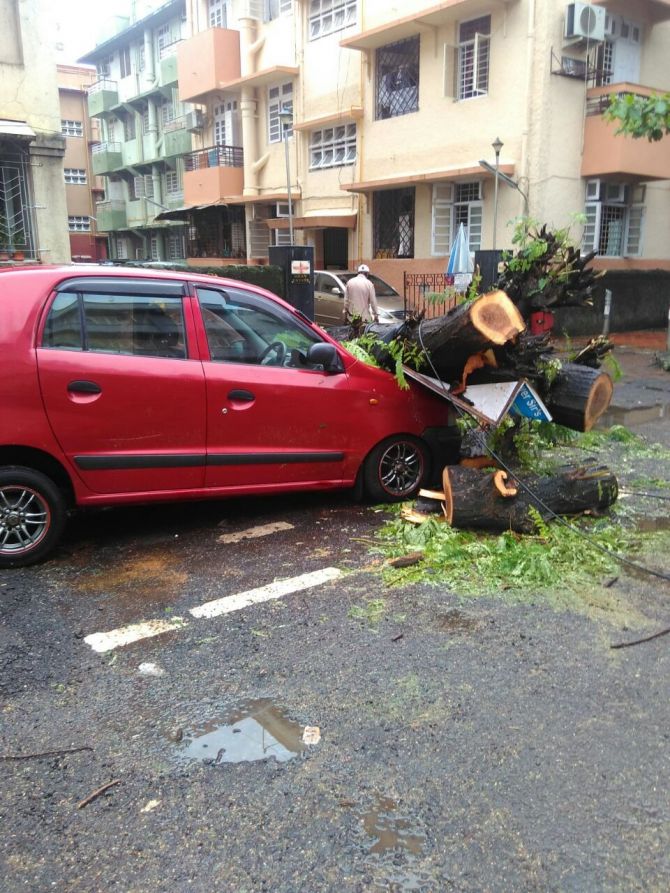 Responding to the tweet posted by Yuva Sena social media consultant Sagar Pardeshi, the youth wing president and Thackeray's son Aaditya asked the BJP to stop such activities and concentrate on relief work instead.

'It's not the time for branding, especially through photoshop and social media. It's time to get down and assist people,' he added.

Responding to Aaditya's allegations, BJP spokesperson Madhav Bhandari said such comments are only worth neglecting.

"The party would not like to respond to such allegations," he said. 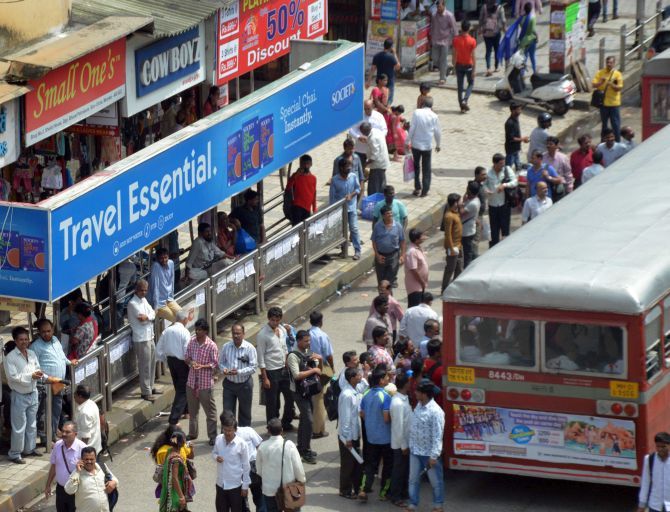 "Uddhav Thackeray had assured that the city would not get water logged this monsoon. What happened to his tall claims? Where has all the thousands of crores spent on desilting works gone?" he asked.

"None of these parties have actually helped people. It is the citizens who came to the rescue of their fellow citizens at the time of the need," the Leader of Opposition in the Legislative Council said.

Munde demanded a probe by a retired judge of the High Court into 'thousands of crores' spent on desilting nullahs in the city. 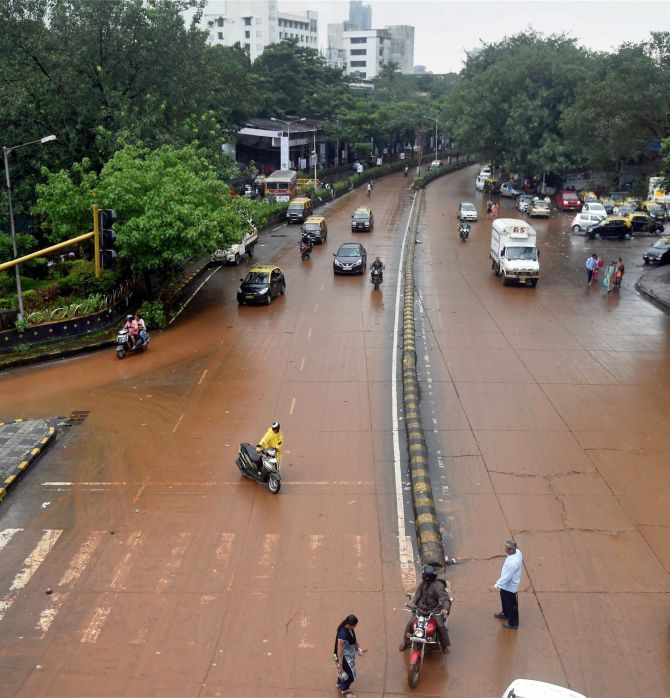 Shiv Sena president Uddhav Thackeray said the civic body had done a 'commendable job' in the given circumstances.

Thackeray also referred to the deaths of children at a Gorakhpur hospital in the BJP-ruled Uttar Pradesh.

At a press conference, the Sena chief said instead of rushing to fix responsibility for the city coming to a standstill, one should talk about the lessons learnt from the Gorakhpur episode and ways to avoid its recurrence.

"The BMC has done a commendable job because of which, in spite of the city receiving about 300 mm of rainfall at some places (on Tuesday), there is no waterlogging today (Wednesday) and the city is back on its feet in a day," Thackeray said. 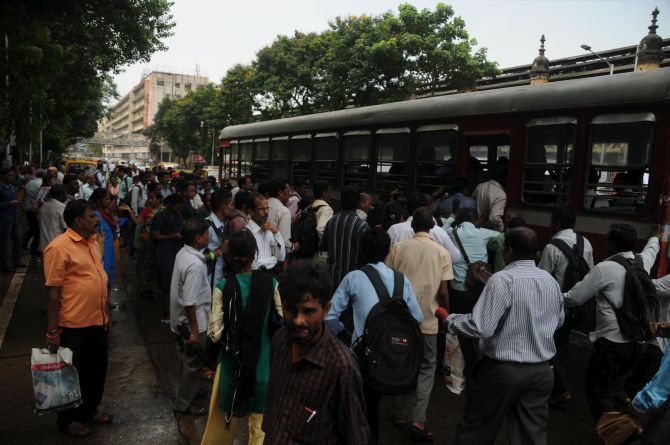 Raking up the Gorakhpur incident, he said, "The news of 60 children dying in a hospital there has been washed away in the media reports on the rainfall in the city and the mayhem it caused. I pay my condolences to the children who died an unfortunate death and pray that such incidents do not take place in the future.

"Instead of debating who is responsible for the city coming to a virtual standstill, one should talk about the lessons learnt from the (Gorakhpur) episode and how to avoid such incidents in the future."

His comments are likely to raise hackles of the BJP, the senior partner of the Sena in Maharashtra and central governments. 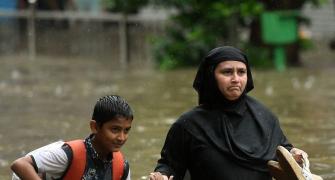 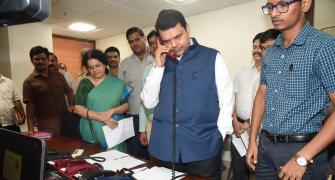 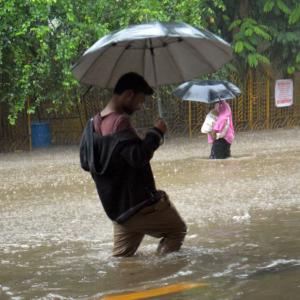