Mass screenings for symptoms of COVID-19 using 'smart helmets' were conducted by Bharatiya Jain Sanghatana volunteers along with the Brihanmumbai Municipal Corporation in Mumbai. 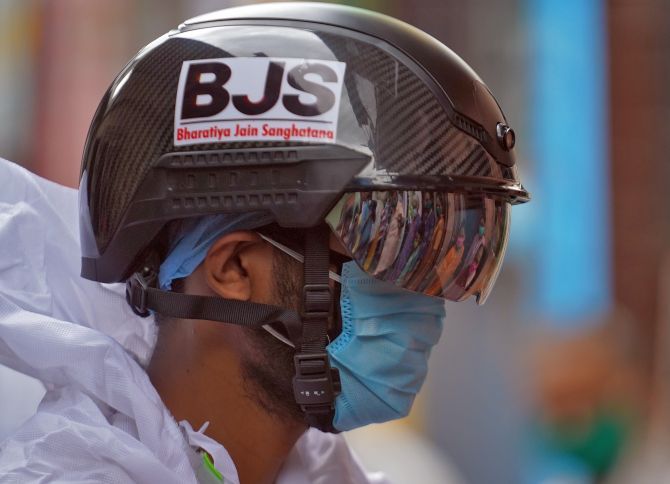 IMAGE: A volunteer wearing the "Smart Helmet", screens residents in a slum in Mumbai. So far, there are four helmets in Maharashtra, two in Mumbai and two in Pune. Photograph: Hemanshi Kamani/Reuters

According to Rushikesh Tawde, who has conducted the screenings, the smart helmet is controlled using a watch and can check temperatures from a distance of up to 10 feet.

"We have been conducting tests for the last two weeks and over 17,000 people have been screened so far. This is the most efficient method to conduct mass screening and to ensure that people with COVID-19 are not spreading the virus to the people around them. So far, there are four helmets in Maharashtra, two in Mumbai and two in Pune," Tawde said.

Dr Neelu Jain, a medical officer volunteer of the BJS, said that the helmet is equipped with a thermal camera which enables it to screen 13 people at a time.

"Earlier, we used to use the thermal gun to check temperatures. That could only screen about 200-300 people in an hour. With the portable smart helmet, over 5,000 people can be screened in the same time frame. This is a much more efficient way to conduct temperature checks as it can be done from a safe distance, without the risk of infection," she said. IMAGE: A worker from Bharatiya Jain Sanghatana, a non-governmental organization, wearing a "Smart Helmet", a portable thermoscanner that can measure the temperature of people at a distance, screens the residents during a check-up campaign for the coronavirus disease in a slum Mumbai. Photograph: Hemanshi Kamani/Reuters

Dr Avinash, another medical officer volunteer, said that those with high temperatures are taken to camps at the testing location for further investigation.

"We set up camps wherever we go for testing. Whenever a person tests positive, they are taken to medical professionals at the camp and tested with oximeters. The swab test is conducted by the BMC. If tested positive, they are admitted to a hospital. If their test returns negative, they are suggested some rest and home quarantine for 14 days," he said. 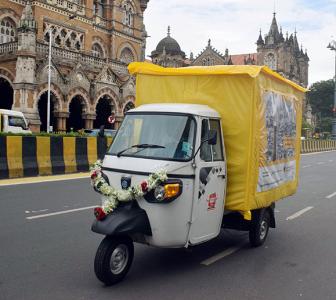 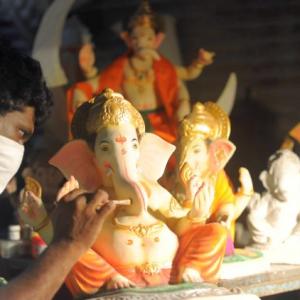 BMC issues dos and don'ts for Ganeshotsav at home