The much-awaited Southwest Monsoon finally arrived in Delhi Tuesday morning bringing respite from scorching summer temperatures, with weather officials saying the onset has been over two weeks behind the schedule, making it the most delayed in 19 years. Other parts of the city also recorded rains during the day with people reporting waterlogging and traffic snarls in some areas.

"The monsoon advanced over Delhi on July 13 against the normal date of June 27," the IMD said.

With this, the monsoon has covered the entire country. 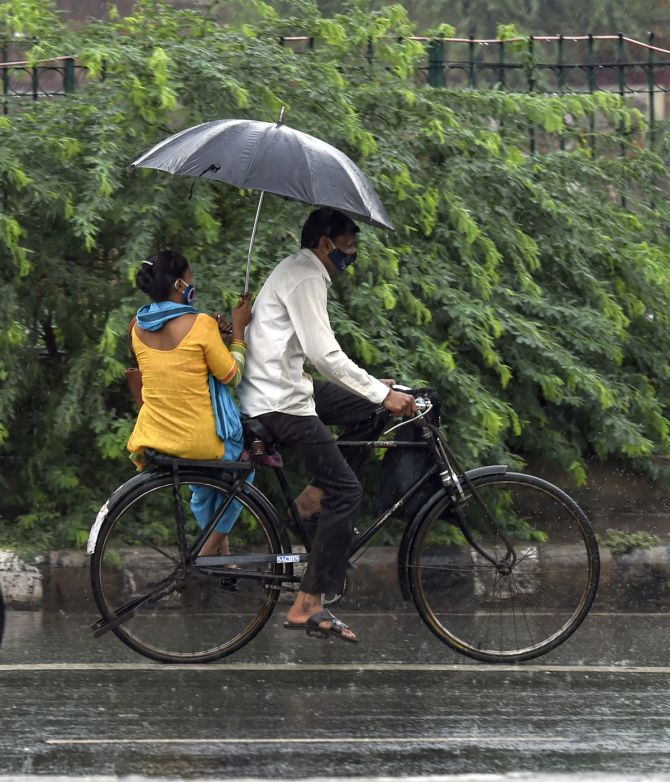 But the rain brought with it waterlogged roads and traffic snarls in parts of the city and the familiar sight of snaking lines of vehicles stuck for interminable minutes.

There was heavy traffic at Dhaula Kuan with one commuter complaining he was stuck for almost 90 minutes (and counting), Azadpur and at the Delhi Cantt and Kalindi Kunj flyovers among other places. This year, the monsoon covered its last outposts -- Jaisalmer and Ganganagar in Rajasthan on July 12. Usually, monsoon covers these two districts on July 8, nearly nine days after it hits Delhi.

However, this year has been different.

Mahesh Palawat of Skymet Weather, a private forecasting agency, said the monsoon made a "weak onset" over Delhi and only patchy rainfall is predicted in the city over the next three days.
He said the monsoon trough, which ran along the foothills of the Himalayas, has now shifted over the central parts of India due to low-pressure systems over the Bay of Bengal and Gujarat.

"After the low-pressure systems dissipate in two to three days, the monsoon trough will again shift towards north, increasing rainfall in the region," he said.

The weather department has had a tough time forecasting the advance of monsoon over Delhi this year.

After several wayward forecasts, the IMD on Monday acknowledged that "such type of failure by numerical models in the prediction of monsoon over the capital is rare and uncommon".

The IMD had earlier said monsoon would hit Delhi on June 15, which would have been 12 days early, but the wind system entered a "break" phase. In early June, the Met office said the conditions will become favourable for the monsoon to advance to Delhi and other parts of northwest India by July 7.

Later, it said Delhi will get its first monsoon rains around July 10.

The weather department revised the forecast yet again on Saturday, saying the monsoon may reach the capital in the next 24 hours. But it kept the city waiting on Sunday and there was hardly any rainfall on Monday too.

According to Kuldeep Srivastava, the head of the IMD's regional forecasting centre, the monsoon had reached the capital on July 7 in 2012 and on July 9 in 2006.

"In 2002, Delhi received its first monsoon showers on July 19. The city had recorded the most-delayed monsoon arrival on July 26 in 1987," he said.

Central Delhi is the most rain-deficient district in the country this monsoon, receiving only 8.5 mm rainfall against the normal of 132 mm since June 1, when the season starts. It has recorded a shortfall of 94 per cent.

Overall, Delhi has so far received 67 per cent less rainfall than normal, putting it in the category of "large deficient" states.