From traditional welcome to glimpses of South Indian art forms and decorative arches, Chinese President Xi Jinping will be treated to a grand reception as he lands in Chennai on Friday for the second informal summit with Prime Minister Narendra Modi at the nearby ancient coastal town of Mahabalipuram. 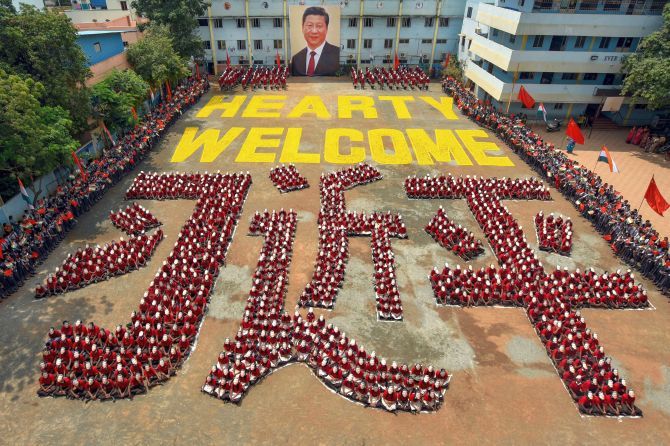 IMAGE: School students create a formation of Chinese President Xi Jinping’s name in Mandarin, ahead of his visit, in Chennai. Photograph: PTI Photo

The seaside town near Chennai is swarming with police and Special Protection Group personnel and the official machinery is fully equipped for the summit.

Bulletproof makeshift structures have been put near the shore temple for the two leaders to hold talks.

Top police and government officials completed assessing the security preparedness and fine tuned arrangements related to amenities for the leaders both in Chennai and at Mahabalipuram . 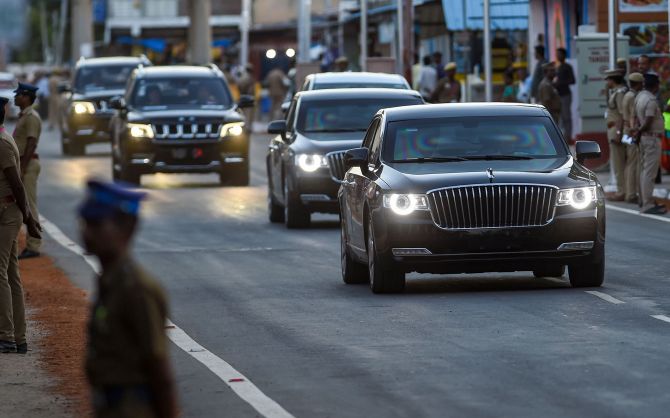 IMAGE: Convoy rehearsal of Chinese President Xi Jinping as part of the preparations for a day before his informal summit with Prime Minister Narendra Modi . Photograph: R Senthil Kumar/PTI Photo

Chief Minister K Palaniswami inspected the arrangements at the coastal town on Thursday.

Entry to the group of ancient monuments have been blocked and barricades have come up around them.

A grand ornamental arch to welcome the two leaders has been prominently put up at the entrance to Mahabalipuram from the East Coast Road. 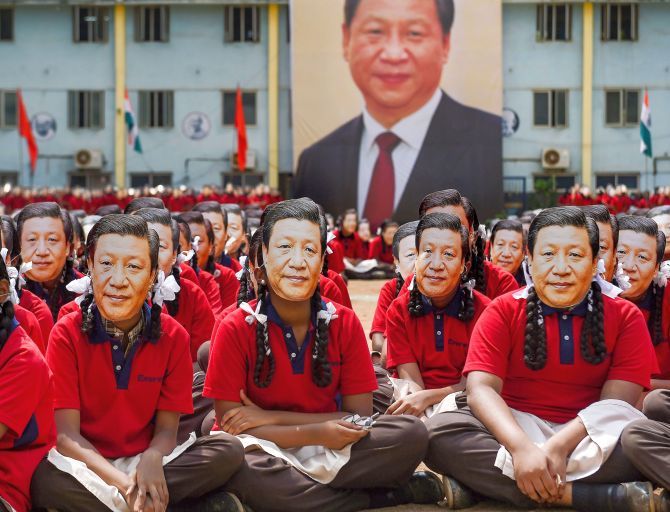 Traditional arches made of banana trees and sugarcane have been put in front of the ITC Grand Chola Hotel where Xi Jinping is scheduled to stay.

On his arrival, Xi will be welcomed by traditional peformances including 'tappu' folk drum art display at the airport by about 500 artistes.

Also, a string of other cultural events have been lined up including Bharatanatyam and Kathakali peformances.

Apart from the cultural programmes on schedule at the Shore temple on Friday evening, makeshift platforms have come up in several locations including here and Mahabalipuram  for brief, cultural shows. 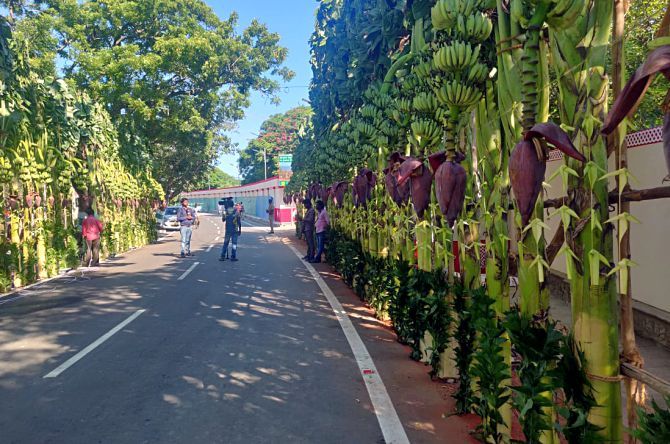 According to the tentative schedule made available to the media, the foreign guest is scheduled to arrive at 2.10 pm and Xi is set to exit the airport through the fifth VVIP gate and proceed to the nearby hotel.

Four high end cars have already arrived from China in a special aircraft for use by Xi.

The entire stretch of GST Road where the airport is located, the East Coast Road, which the foreign leader will take to reach Mahabalipuram, sports a fresh new look..

Wallposters over the huge pillars of the Metrorail on the GST Road have been removed and an LED display board has also come up near the airport to welcome the Chinese president.

After a brief stay at the hotel, Xi is set to leave for Mahabalipuram by road at 4 pm and he will be welcomed by Prime Minister Narendra Modi at the seaside town. 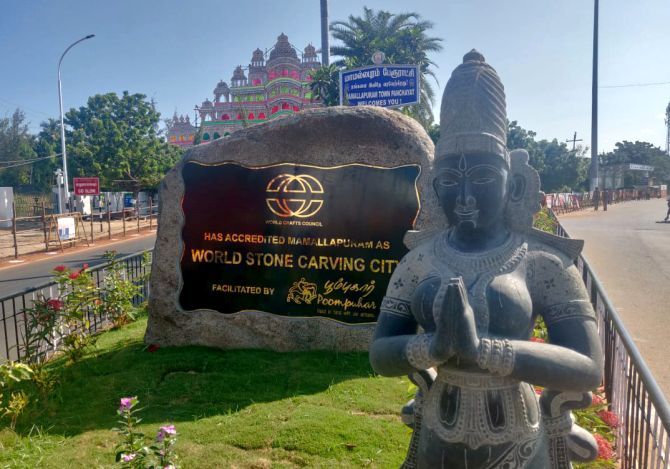 The Chinese president will be visiting the Pallava era monuments of Arjuna's penance, the Five 'Rathas' (chariots) and the Shore temple at Mahabalipuram along with Modi.

Following cultural events at the Shore temple, the Prime Minister will host dinner for the visitng foreign leader.

On Saturday, after talks between the two leaders and delegations of the two nations, Xi is set to leave Chennai at 1.30 pm.

Only designated officers are allowed for the official events.

State broadcaster Doordarshan alone has been permitted to station its outside broadcasting vans at Mahabalipuram. 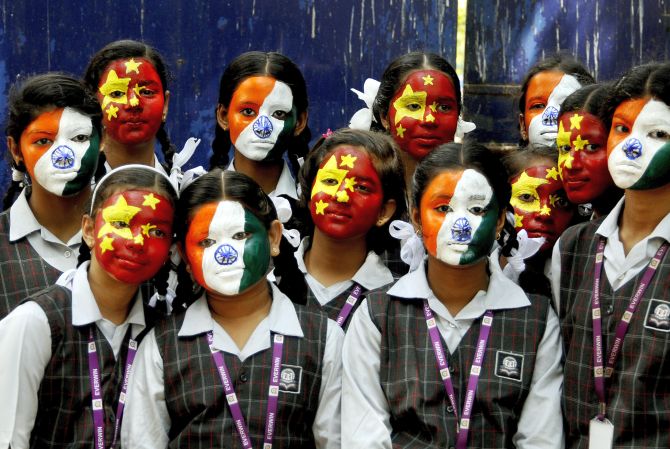 IMAGE: School students paint their faces with the flags of India and China. Photograph: ANI Photo

Traffic police, meanwhile, have announced diversions to the city from Mahabalipuram and vice-versa on Friday and Saturday and have requested the public to cooperate in view of the visit of the foreign dignitary and the prime minister.

Some colleges on the Old Mahabalipuram Road and its periphery have declared a holiday on Friday. Many Information Technology firms on OMR and ECR corridor have asked their employees to work from home in view of traffic diversions. 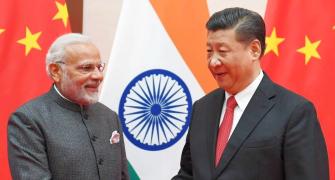 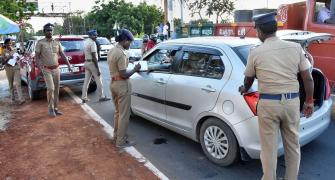 Rolling out the red carpet for Modi-Xi meet 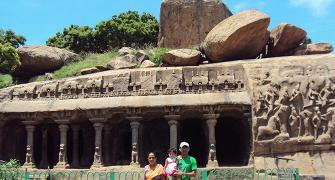 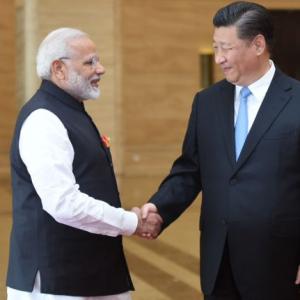