Israel and the Palestinian militant group Hamas have agreed to a ceasefire, bringing to an end 11 days of bombardment, the heaviest flare-up since the 2014 Gaza War that has left over 240 people dead and threatened to destabilise the volatile region.

The ceasefire, which followed mounting pressure from the United States, Egypt and other international brokers to halt the violence, came into effect on Friday.

The Israeli Security Cabinet voted to accept the ceasefire late Thursday as the Israeli south and Gaza remain inflamed.

The Security Cabinet unanimously agreed to a "mutual and unconditional" cessation of hostilities, according to a statement from Prime Minister Benjamin Netanyahu's Office.

“The political leadership emphasised that reality on the ground is what will determine if the campaign continues or not,” the statement said.

Netanyahu did however inform the Israel Defence Forces to prepare for a scenario in which Hamas did not respond to Egypt's ceasefire offer. 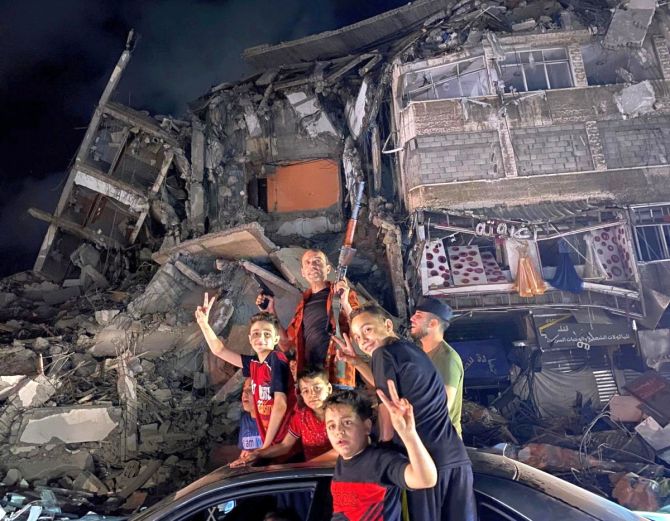 IMAGE: People gesture near the rubble of a damaged building as Palestinians celebrate in the streets following a ceasefire, in Gaza City. Photograph: Mohammed Salem/Reuters

Celebratory demonstrations took place in the Gaza Strip and West Bank as well, following the ceasefire.

Fireworks, singing, and parades down the streets could be seen in uploaded videos on social media.

Both Israel and Hamas have claimed victory in the conflict that has left over 240 people, including an Indian caregiver in Israel, dead.

Soumya Santosh, 30, was killed in a rocket attack by Palestinian militants from Gaza. Santosh, who hailed from Kerala's Idukki district, worked as a caregiver attending to an old woman at a house in the southern Israeli coastal city of Ashkelon.

Egyptian President Abdel Fattah al-Sisi thanked US President Joe Biden for his role in the success of the Egyptian brokered ceasefire between Israel and Hamas.

He added that both see the urgency in managing the conflict between the parties through diplomacy.

Biden hailed the ceasefire, saying both Palestinians and Israelis deserve to live safely.

“I believe the Palestinians and Israelis equally deserve to live safely and securely and to enjoy equal measures of freedom, prosperity, and democracy. My administration will continue our quiet, relentless diplomacy toward that end. I believe we have a genuine opportunity to make progress and I'm committed to working for it,” Biden said on Thursday.

He said the US is committed to working with the United Nations to provide rapid humanitarian assistance for the people of Gaza.

“We remain committed to working with the United Nations and other international stakeholders to provide rapid humanitarian assistance and to marshal international support for the people of Gaza and the Gazan reconstruction efforts,” he said. 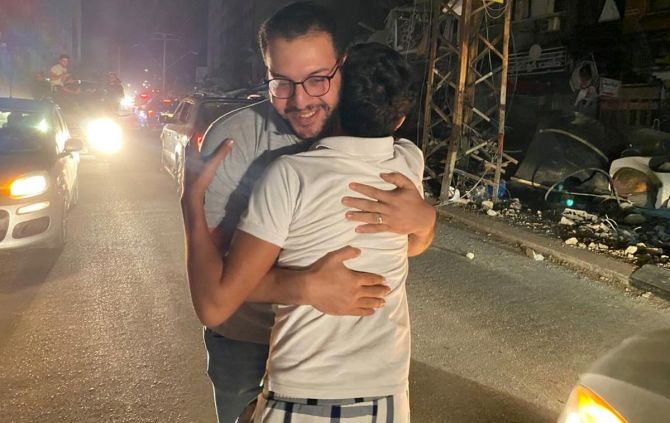 “In my conversation with Netanyahu, I commended him for the decision to bring the current hostilities to a close in less than 11 days.

"I also emphasised what I've said throughout this conflict--the United States fully supports Israel's right to defend itself against indiscriminate rocket attacks from Hamas and other Gaza-based terrorist groups that have taken the lives of innocent civilians in Israel,” he said.

Fighting began in Gaza on May 10 after weeks of rising Israeli-Palestinian tension in East Jerusalem that culminated in clashes at a holy site revered by both Muslims and Jews.

Israel carried out hundreds of air and several ground strikes in Gaza, while Palestinian militants have fired more than 4,000 rockets at central and southern Israel since last Monday.

Israeli airstrikes killed 232 Palestinians, including 65 children, according to the Hamas-run health ministry there.

At least 12 people in Israel, including two children, have been killed by Palestinian militant fire from Gaza, according to the IDF and Israel's emergency service. 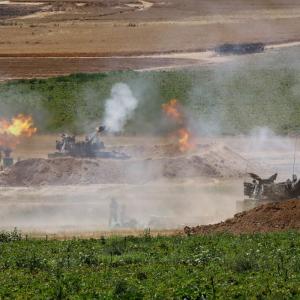 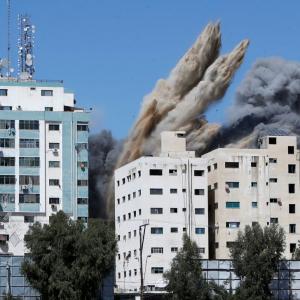