India's COVID-19 tally of cases went past 42 lakh with a record 90,802 people being infected in a day, while 32,50,429 people have recuperated so far, pushing the national recovery rate to 77.30 per cent on Monday, according to the Union health ministry data. IMAGE: A graveyard being sanitised after the burial of COVID-19 affected patients in Ranchi. Photograph: Somnath Sen/ANI Photo

The COVID-19 case fatality rate has further declined to 1.70 per cent.

There are 8,82,542 active cases of the infection in the country which comprises 20.99 per cent of the total caseload, the data stated.

According to the Indian Council of Medical Research, a cumulative total of 4,95,51,507 samples have been tested up to September 6 with 7,20,362 samples being tested on Sunday. IMAGE: A medical worker takes care of a patient suffering from the coronavirus at the Intensive Care Unit of the Max Smart Super Speciality Hospital in New Delhi. Photograph: Danish Siddiqui/Reuters

Fifteen fatalities have been reported each from Bihar and Rajasthan, 14 each from Gujarat and Jammu and Kashmir, 10 from Kerala, 11 from Uttarakhand, nine from Telangana, eight each from Assam and Odisha, seven each from Jharkhand and Goa, five from Tripura, two each from Chandigarh and Manipur, one each from Himachal Pradesh and Meghalaya. IMAGE: A health worker takes samples from a homeless man for COVID-19 test as others wait for their turn in New Delhi. Photograph: Manvender Vashist/PTI Photo 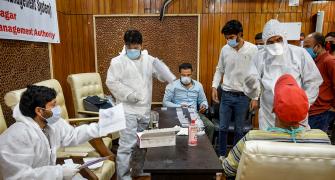 In the works: List of who will get Covid vaccine first