It took 110 days for coronavirus cases in the country to reach one lakh, while just 48 days more to go past the seven lakh-mark. 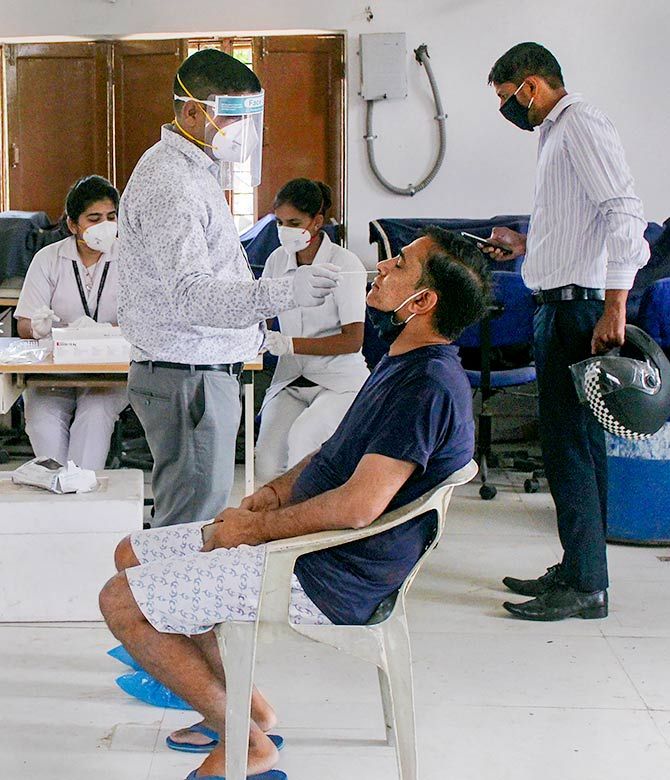 With another big single-day jump in coronavirus cases, India's COVID-19 tally crossed the seven lakh-mark on Monday, just four days after the number of infections in the country had reached six lakh.

The death toll due to the disease climbed to over 20,000, while the total number of tests for detection of COVID-19 also crossed the one-crore mark in India on Monday.

According to Union health ministry figures updated in the morning, a big single-day jump of 24,248 COVID-19 cases took India's tally to 6,97,413, while the death toll due to the disease climbed to 19,693 with 425 new fatalities.

However, a PTI tally showed India's COVID-19 caseload at 7,11,878 and the death toll at 20,139. The tally has been compiled as per information provided by respective states and union territories.

The country recorded over 20,000 cases of the infection for the fourth consecutive day.

India went past Russia on Sunday to become the third worst-hit nation by the COVID-19 pandemic. 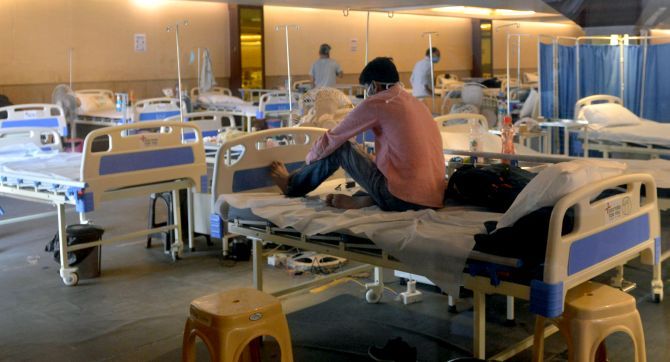 IMAGE: An affected patient of COVID-19 is treated in Covid-19 care center set up in the Shehnai Banquet Hall at the LNJP Hospital, in New Delhi. Photograph: ANI Photo

Only the United States and Brazil are ahead of India in terms of total coronavirus infections.

Cases have been consistently rising in the country. It took 110 days for coronavirus cases in the country to reach one lakh, while just 48 days more to go past the seven lakh-mark.

With a steady rise, the number of recoveries stand at 4,24,432 in the country, while one patient has migrated.

There are 2,53,287 active coronavirus cases in the country, the ministry's data showed.

"Thus, 60.86 per cent of the patients have recovered so far," the ministry said.

According to the health ministry, during the last 24 hours, 3,46,459 samples have been tested with the cumulative number of samples tested till now being 1,01,35,525.

'This signifies the importance accorded to widespread testing and the focussed 'test, trace, treat' strategy with several follow-up measures taken in tandem by the Central government and the States/UTs,' the ministry said.

This achievement has also been possible by the continuously expanding network of testing labs throughout the country and as of Monday there are more than 1,105 labs for COVID tests. 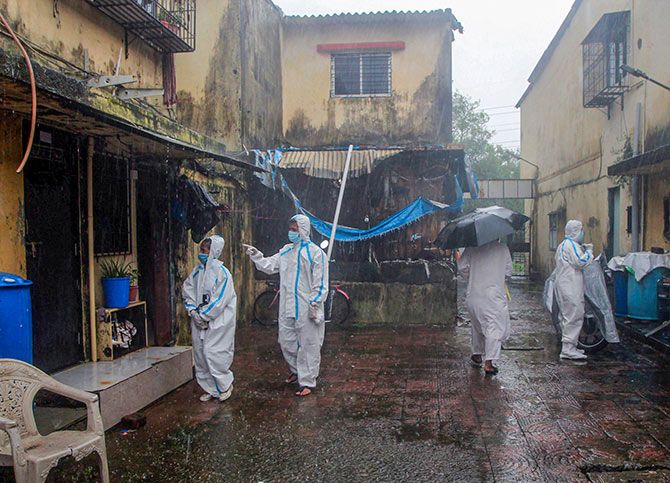 There are 788 labs in the government sector and 317 private labs.

The Centre on Monday said the national positivity rate, percentage of samples testing coronavirus positive from the total number of samples, has also reduced and now stands at 6.73 per cent.

It said the average number of samples being tested per day for COVID-19 has gone up in Delhi from 5,481 to 18,766 in about a month and in spite of increased testing, the positivity rate has declined from around 30 per cent to 10 per cent in the last three weeks.

The Union, state and union territory governments have made a joint and coordinated effort to effectively manage the COVID-19 pandemic in the country, the health ministry said in a statement.

As part of the coordinated efforts, the Union government has emphasised on increasing testing, prompt contact tracing and timely clinical management of cases, the statement said.

Meanwhile, the Indian Academy of Sciences, a Bengaluru-based body of scientists, has said the Indian Council for Medical Research's (ICMR) target to launch a coronavirus vaccine by August 15 is 'unfeasible' and 'unrealistic'.

The IASc said while there is an unquestioned urgent need, vaccine development for use in humans requires scientifically executed clinical trials in a phased manner. 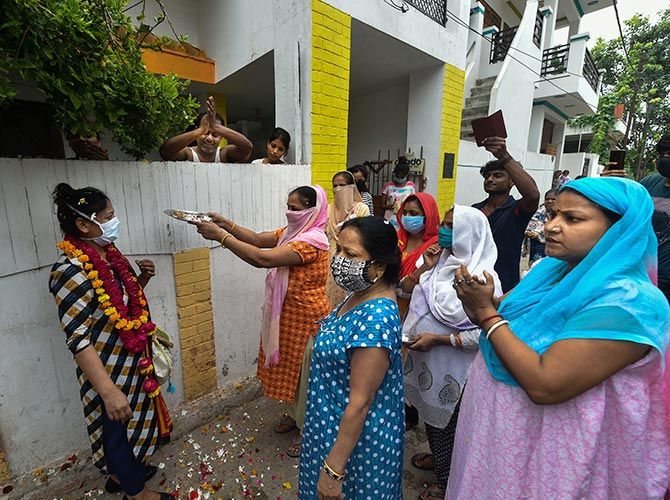 IMAGE: A nurse, who was posted in COVID-19 duty and exposed to the virus, being welcomed by relatives and neighbours as she returns home on completion of her treatment, in Lucknow. Photograph: Nand Kumar/PTI Photo

While administrative approvals can be expedited, the 'scientific processes of experimentation and data collection have a natural time span that cannot be hastened without compromising standards of scientific rigour', the IASc said in a statement.

According to the Johns Hopkins University in the United States, which has been compiling COVID-19 data from all over the world, India is at the eighth position in terms of the death toll due to the disease.

Of the 425 deaths reported in the last 24 hours, 151 are from Maharashtra, 63 from Delhi, 60 from Tamil Nadu, 37 from Karnataka, 21 from West Bengal, 18 from Gujarat, 14 from Andhra Pradesh, 12 from Uttar Pradesh, 10 from Madhya Pradesh, nine from Rajasthan, seven from Telangana, six from Bihar, five each from Jammu and Kashmir and Haryana, two each from Punjab, Jharkhand and Odisha, and one from Goa.

More than 70 per cent of the deaths were due to comorbidities, it said. 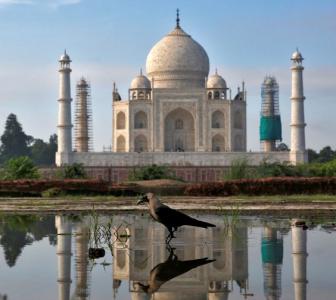