Hundreds of people thronged the streets leading to the Pakistan High Commission in Delhi's Chanakyapuri on Saturday and protested against the mob attack and stone-pelting on devotees at the historic Gurdwara Nankana Sahib, the birthplace of Sikhism founder Guru Nanak Dev, in Lahore. 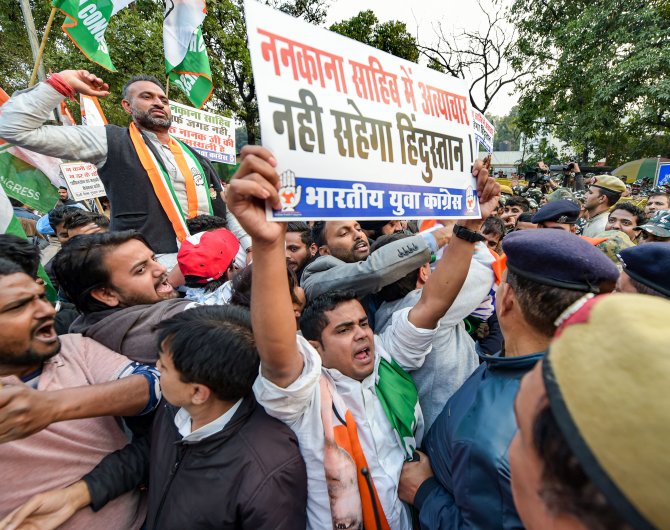 IMAGE: Youth Congress workers stage a protest against Pakistan over attack on Gurdwara Nankana Sahib and alleged abduction of the Sikh girl Jagjeet Kaur and her forcible conversion to Islam, outside the Pakistan High Ccommission in New Delhi. Photograph: Vijay Verma/PTI Photo

"Double standard of Imran Khan, Sikhs are being tortured in Pakistan," read one of the placards.

Police had to barricade the roads to prevent the protesters -- belonging to Bharatiya Janata Party, Congress, Delhi Sikh Gurdwara Management Committee and other organisations -- from reaching the high commission.

A huge posse of police personnel was deployed and water cannon kept on standby, a police official said. The protesters were stopped near Chanakyapuri police station. 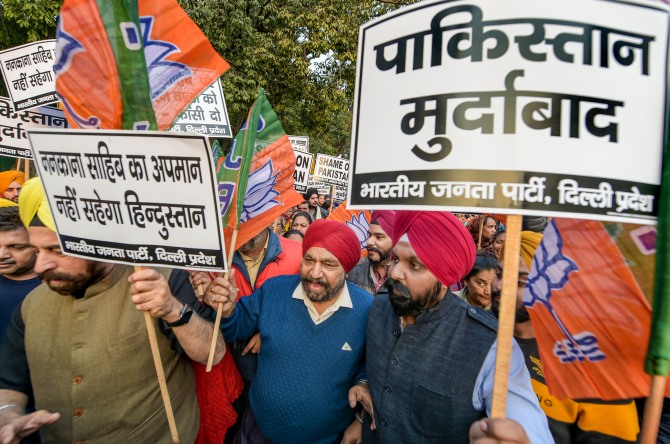 The protest by DSGMC and Akali Dal members was held at around 1 pm near Chanakyapuri, an affluent neighbourhood and diplomatic enclave in the city. Sikh community members also submitted a memorandum to the Pakistan High Commission, said DSGMC president Manjinder S Sirsa.

BJP and Congress members stood on either side of a road there and raised slogans against Pakistan and its prime minister.

"It has not happened for the first time. They abduct our children and convert them. Pakistan should put an end to such incidents. We know how to respond," Congress leader Krishna Tirath said.

"Some anti-social elements attacked Nankana Sahib Gurdwara. We expect the Pakistan prime minister to break his silence on the incident," she said. 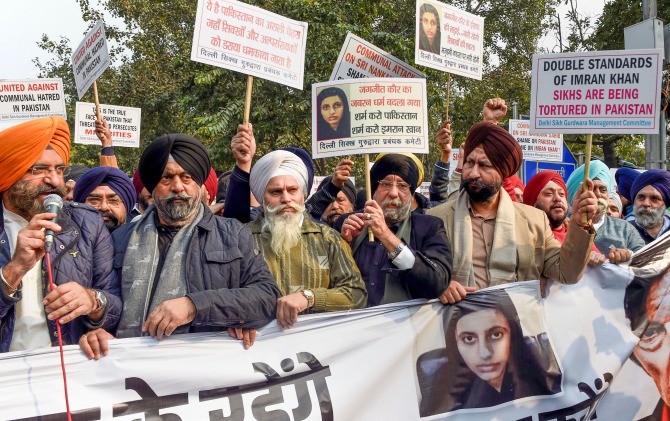 "Yesterday, a mob of jihadis attacked Nankana Sahib Gurdwara due to which our Sikh brothers and sisters are in terror. The CAA has been framed to save such minorities from persecution in Pakistan," Delhi BJP chief Manoj Tiwari said.

BJP national secretary Sardar RP Singh too slammed Pakistan, saying this was not an isolated incident of Sikhs being attacked in that country.

"Previously, a daughter of Granthi of Nankana Sahib was abducted and converted to Islam and now the jihadis have pelted stones on Nankana Sahib Gurdwara and tried to kill Sikh brothers and sisters due to which they are very much terrorised. The parties which are opposing CAA are unable to see how the persons engaged in protecting their religion are being persecuted. 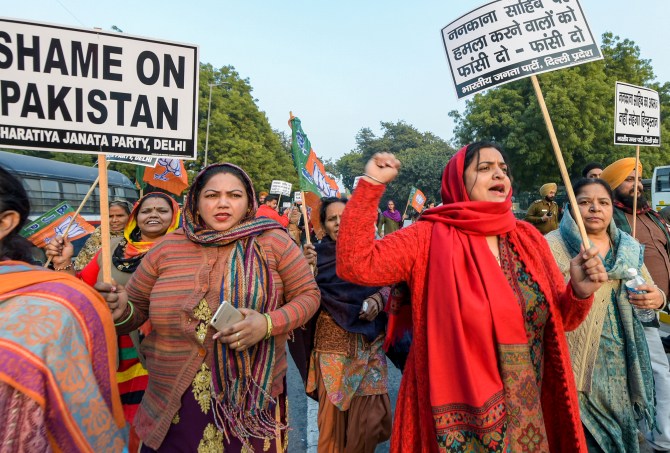 IMAGE: BJP national secretary Sardar RP Singh too slammed Pakistan, saying this was not an isolated incident of Sikhs being attacked in that country. Photograph: Vijay Verma/PTI Photo

"The politics of Congress and Aam Aadmi Party is based on caste and religion. They feel the vote of a particular community will make them victorious. It appears from their statements they are in support of atrocities on minority communities in Pakistan and do not want them to become Indian citizens," he said.

On Friday, the external affairs ministry condemned the "wanton acts of destruction and desecration" at Gurdwara Nankana Sahib and urged Pakistan to take immediate steps to ensure safety and welfare of the Sikh community. It also said that members of the minority Sikh community in Pakistan have been subjected to acts of violence in the holy city of Nankana Sahib. 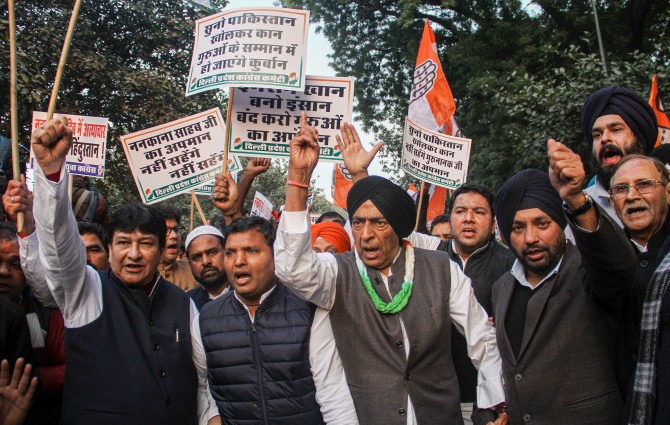 IMAGE: DPCC president Subhash Chopra along with other leaders take part in a protest against Pakistan over attack on Gurdwara Nankana Sahib, outside the Pakistan High Ccommission. Photograph: PTI Photo

Pakistan has rejected reports the gurdwara was desecrated, saying it remains "untouched and undamaged".

During the protest in Delhi, Manjeet Singh Bakshi, a protester, said, "Whatever they have done is condemnable. The prime minister of Pakistan should condemn this and take strict action against the accused. After the death of Guru Nanak Devji, Muslims and Sikhs had distributed his 'chadar'."

Condemning the mob attack on the gurdwara, IYC president Srinivas BV said, "Pakistan is playing with our emotions and the time has come when we need to teach them a lesson." 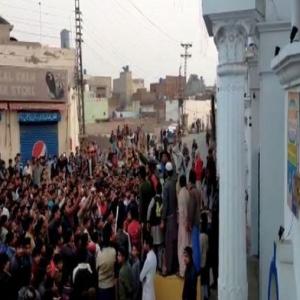 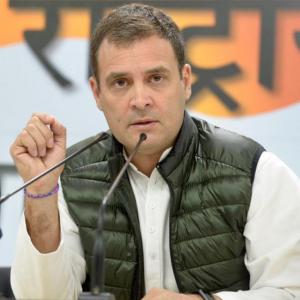