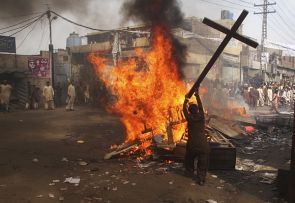 A lot of the terrorism that is affecting Pakistan is really a blowback of the Pakistani state’s policy of using jihadist groups as instruments of state policy. And unlike some other countries with similar policies, Pakistan doesn’t have the benefit of the political and social space for pulling back from the disastrous course, says Sushant Sareen.

On September 22, two suicide bombers targetted a church in Peshawar, killing over 80 people and injuring nearly 150. Entire families were wiped out. Many Christian households, who in any case barely eke out an existence in a country and society where they are treated as Untermensch (sub-humans, because they are not Muslims) lost their sole bread earner.

Teachers, students, newly-weds, about to be married, pregnant women, children (around 20) were blown to bits by the jihadists fighting for the glory of Islam. Of course, this is neither the first time such a carnage of minorities has happened in the ‘Land of the Pure’, nor will it be the last time such a massacre has happened because if truth be told, an open season has been declared on minorities in Pakistan.

Muslim minority sects, Shias in particular and within the Shia community, the Hazaras, have routinely come in the cross hairs of jihadist mass murderers. Other non-Muslim communities too have been targeted -- Hindu girls are a favourite target, Ahmediyas subjected to the worst kinds of hate crimes, and Christians not only made victims to the infamous and obnoxious blasphemy laws but also pogroms in which entire neighbourhoods are burnt by rampaging mobs.

Every time an outrage such as the bombing of the All Saints’ Church in Peshawar takes place, there is the standard response in Pakistan: the government wrings its hands helplessly and issues a pro forma condemnation but does absolutely nothing tangible to prevent such an incident from being repeated; most politicians also issue similar pro forma condemnation not because they genuinely feel outraged, but because that is the politically correct thing to do.

Other politicians -- to name just the most notorious of this lot, the Taliban defender and supporter Imran Khan, the flag-bearer of Islamist terror Munawar Hasan of Jamaat Islami and the Maulana who wants to run the Taliban but is currently running scared off them, Maulana Fazlur Rehman of Jamiat Ulema-e-Islam-F -- condemn the incident but then make the whole thing sound insincere and disingenuous by adding qualifications which are really short hand for not pointing the finger at the real perpetrators but deflecting the blame to an un-named ‘third force’ or insinuating a ‘foreign hand’ (which though not always specified is often an allusion to the US, India and Israeli intelligence agencies).

The ugly reality is however quite different from the spin that the self-serving and scared politicians, analysts and strategists give to gruesome acts of terrorism. A son of Maulana Maudoodi, founder of the Jamaat Islami, the party that serves as the ‘Mother of political Islamism’ and is arguably not only one of the political faces of the Al Qaeda but also partners Imran Khan’s party in running the provincial government in Khyber Pakhtunkhwa, hit the nail on the head when he said that the bombing of the Peshawar church was a natural outcome of creating a state in the name of religion.

But even this is a partial explanation of the blood lust that drives the jihadists. Pakistan's real problem isn’t so much that terrorists are running amok, but that Islamist terrorists are operating with impunity and, to an extent, with the sanction of society. In other words, more than terrorism, the problem is societal extremism and a communalised national mindset.

Much as Pakistanis like to explain away extremism in society as something that was fostered on the country by the Islamisation policies unleashed by the former military dictator, General Zia-ul Haq, the fact is that this mindset has been present since before independence. If anything, it was this mindset that gave birth to Pakistan, and if there is no course correction, then this very mindset will probably become the reason for the death of the state of Pakistan.

Terrorism and radicalism are only the manifestations or symptoms of the deep seated extremist mindset which has been consciously and deliberately fuelled by the state through an education system in which children are taught to hate other communities, rendering most of them incapable of living in peace with not only non-Muslims but also Muslims who adhere to a different sect or school of theology.

A recent example of this climate of intolerance was when a news anchor (infamous for being part of the caretaker setup put in place in 2007 by the then dictator and self-proclaimed ‘enlightened moderate’, General Pervez Musharraf) who started a campaign against an elite Lahore school because it was teaching comparative religions to students in order to inculcate tolerance and understanding of other faiths, and the alacrity and zeal with which the Punjab government headed by Shahbaz Sharif came down on the school administration and registered cases against them.

In such an environment, bombing of religious places of ‘others’ -- Christian churches, Hindu temples, Shia Imambargahs and Ahmediya masjids -- is par for the course.

Yet another example is that of the blasphemy law. The problem with the blasphemy law isn’t so much that it is a bad law (which it is) but the extremism in society. Many places have bad laws or laws that are anachronistic. For instance, Britain has both an adultery law and even a blasphemy law but it is hardly ever applied because society has moved on.

In Pakistan, however, merely accusing a person of blasphemy is enough to practically pronounce the death sentence on the person because if the people don’t kill you even before any court finds you guilty, the judge will be so terrified of acquitting you that he will pronounce the guilty verdict without applying his mind or evaluating the evidence, and if by chance he does acquit you, then waiting to kill you outside the court will be all sorts of people.

There is little doubt that a lot of the terrorism that is affecting Pakistan now is really a blowback of the Pakistani state’s policy of using jihadist terror groups as instruments of state policy. But here again, it was not this policy per se that's the problem. Other countries have also used such cynical and disastrous policies and lived to regret it and then being forced to change course and jettison such policies.

But unlike other countries, Pakistan doesn’t have the benefit of the political and social space for pulling back from the disastrous course it took some four decades ago when it first tried to use jihad to achieve foreign policy and national security objectives. If anything, it appears extremely unlikely that the Pakistani state (as it is currently constituted) will survive the wages of this jihadist policy.

The reason is that this policy fits in well and feeds on the national narrative of extremism. It is both a concomitant and a corollary of the conscious spread and tolerance of extremist thought in Pakistani society. It is now part of the culture that the state inculcated in the people.

It is precisely because of this culture of intolerance that neo-jihadists like Imran Khan and old school communalists like members of the ruling Pakistan Muslim League-Nawaz invariably resort to denial, deflection and obfuscation even in the face of horrific incidents of terrorism.

So terrified are these so-called leaders of the Pakistani people that they do not even mention the name of the terrorist group which carries out such attacks, even though the terrorist group openly takes responsibility for the attack. With almost the entire country suffering from a sort of national and civilizational Stockholm Syndrome, how can Pakistan even think of fighting, forget about defeating, the Taliban?

While there are still a lot of right thinking and sensible people in Pakistan, many of whom display great courage and intrepidness to openly criticise, condemn and even challenge the Taliban and other Islamist terror groups and their overground supporters, the sad fact is that these brave people don't count for anything in today’s Pakistan.

The main reason for this is that they depend on the state to fight on their side but the state is run by people who are either on the side of the terrorists or are using terrorists for their grandiose, if also delusional, strategic objectives or are just too scared of facing, much less fighting, the terrorists. A prime example is Shahbaz Sharif who publicly pleaded to the Taliban to spare the Punjab from their attacks since the PML-N and the Taliban were fighting for the same cause!

Today, the PML-N is in power not only in Punjab but also in Islamabad, and given the recent resolution passed by the All Parties Conference for opening a dialogue with the Taliban, the ‘fighting for the same cause’ has now been taken to the next level, in which the Taliban have been made ‘stakeholders’ in the system.

In such a situation, the massacre of minorities is a small price to pay, especially when the PML-N storm-troopers in Punjab have also participated in pogroms against Christians. Therefore, chances are that in the coming weeks, months and years, there will be many more such incidents, all of which will be followed by the usual meaningless statements of condemnation and bizarre conspiracy theories. 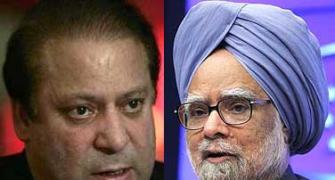 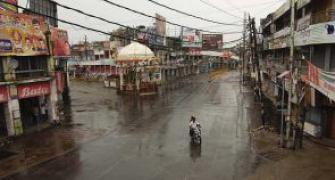 How India's heritage of pluralism is being undone 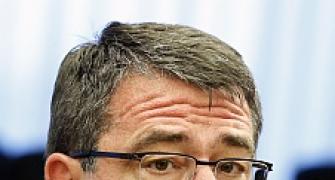 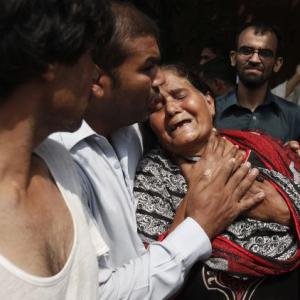 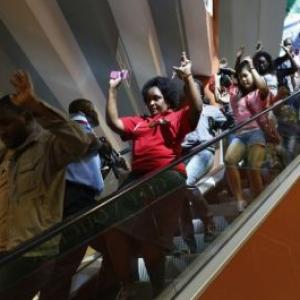