Congress chief Rahul Gandhi on Wednesday offered prayers for his late father Rajiv Gandhi and other ancestors with the 'bali tharpanam' ritual on the banks of Papanasini stream, where the ashes of the former prime minister were immersed nearly three decades ago. 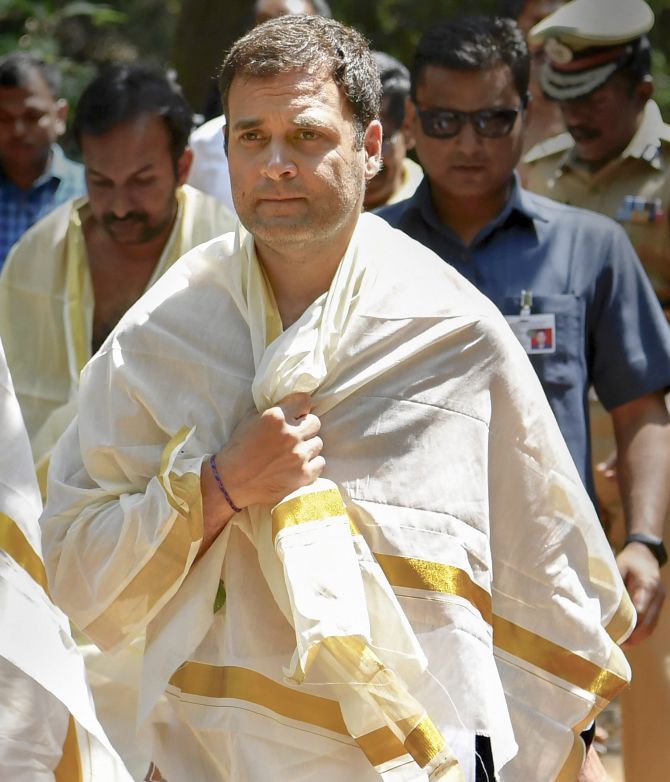 Gandhi, who is on a whirlwind two-day tour of Kerala as part of Lok Sabha poll campaign and is contesting from Wayanad besides his family bastion Amethi, took time off his hectic schedule to pay obeisance at the famed Thirunelli temple near the stream.

Wearing a traditional dhoti and draping a 'kasavu' (silk) shawl, the 49-year-old leader prostrated before the sanctum sanctorum and offered 'kanikka' in the temple 'hundi'.

After the rituals, he said that standing beside the Papanasini, where his father's ashes were immersed in 1991, "brought back fond memories of him & our time together".

"This beautiful temple & its surroundings are an oasis of peace & serenity," he tweeted. 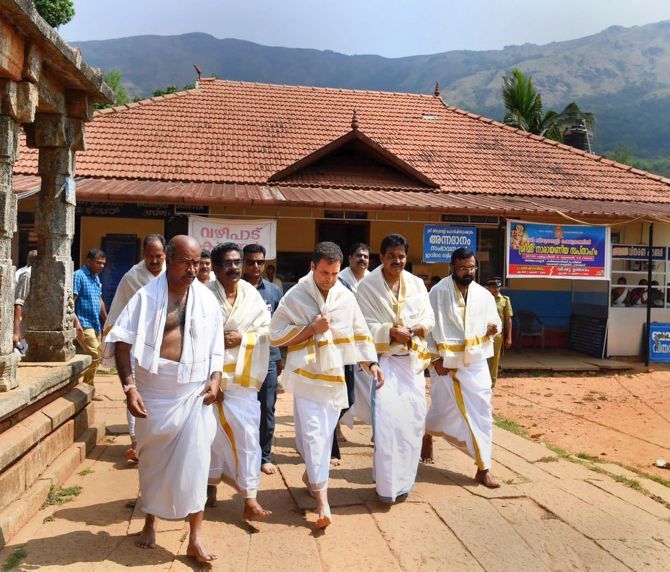 Known as the "Kashi of the South", the Thirunelli temple, located in a picturesque valley surrounded by mountains and thick forest, is dedicated to Lord Maha Vishnu.

According to Hindu belief, performing the 'bali tharpanam' (paying obeisance to departed souls) ritual for ancestors in the 'Papanasini', the stream attached to the forest temple, is sacred.

Gandhi arrived at the forest temple in a helicopter, accompanied by his party leaders, in the morning.

After a brief conversation with the priest about the rituals and traditions of the ancient shrine, Gandhi proceeded to the sacred stream, located about 700 metres from there.

The security officials had a tough time leading the bare-footed leader through the undulating terrain, paved with huge rocks and boulders, inside the thick forest, notorious for Maoist presence. 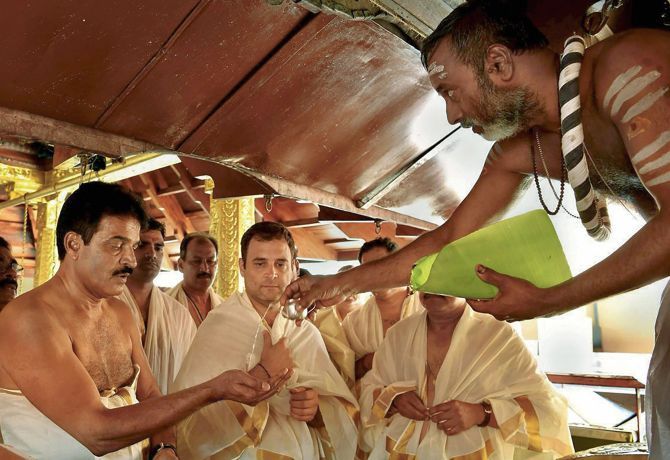 IMAGE: Gandhi spent around 45 minutes at the hill shrine before leaving for a party meeting at Sultan Bathery, around 45 km from Thirunelli. Photograph: PTI Photo

Television visuals showed Gandhi listening to the priest chanting the mantras and following his instructions to perform the 'tharpanam'.

Besides the rituals for Rajiv Gandhi, rites for Indira Gandhi, former prime minister and Rahul Gandhi's grandmother, were also held.

Gandhi spent around 45 minutes at the hill shrine before leaving for a party meeting at Sultan Bathery, around 45 km from Thirunelli.

"Besides Rajiv and Indira, the AICC chief performed the ritual for the jawans who lost their lives in Pulwama terror strike and lakhs of party workers who have died," Congress leader K C Venugopal, who was among those who accompanied Gandhi, later told reporters. 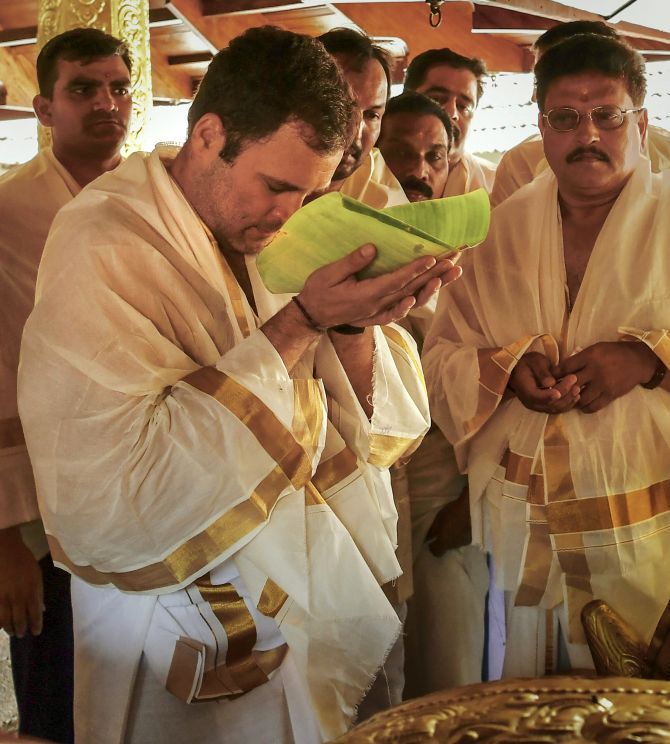 IMAGE: Rahul Gandhi had expressed keen interest to offer prayers at the shrine during his last visit to Wayanad. Photograph: PTI Photo

"We could not make it last time when he came to submit the nomination papers on April 4 due to security reasons," he said.

"Gandhi really wanted to visit the shrine and perform the ritual at Papanasini where his father's ashes were immersed," Chandy added.

An urn containing the ashes of Rajiv Gandhi was brought here in 1991 and was immersed in the 'Papanasini', which translates to 'destroyer of sins'. 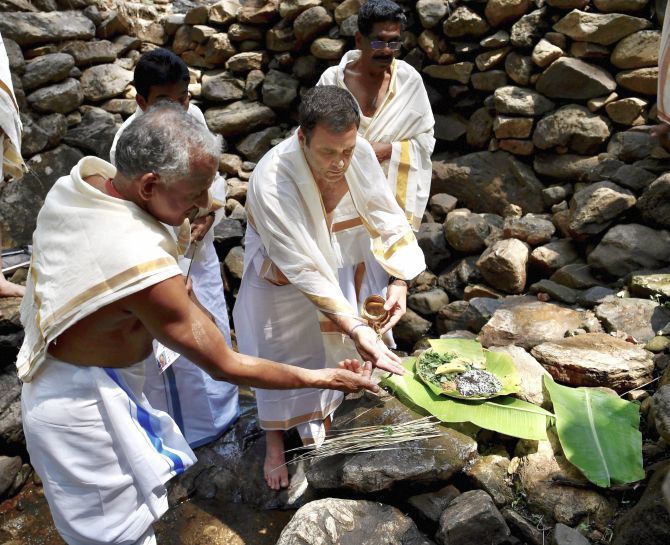 Rajiv Gandhi was killed in a suicide bomb blast at Sriperumbudur in Tamil Nadu on May 21, 1991 during an election campaign. Former Prime Minister Indira Gandhi was shot dead by her body guards on October 31, 1984.

Surrounded by the Kambamala, Karimala and the Varadiga peaks, the Thirunelli temple near Mananthavady embodies traditional Kerala architecture.

The shrine is shielded by 30 granite columns and the ground is paved with huge square pieces of granite.

While addressing three massive rallies in Wayanad, Gandhi tore into the Bharatiya Janata Party-led National Democratic Alliance government and said the saffron party was only interested in imposing its ideology on the people of the country. 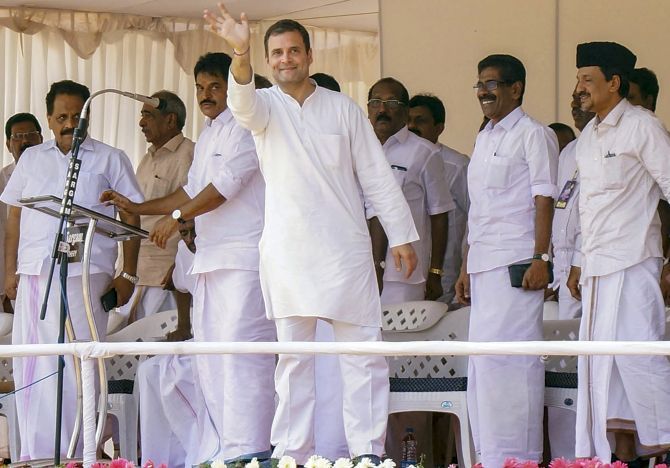 "Who is Mohan Bhagwat to teach us about culture and history? Kerala should be run by the people of Kerala. This is the same sentiment in state after state," he said,
addressing a rally at Vandoor in Wayanad constituency.

Gandhi said he wanted the world to know the name of Wayanad and wished to transform it into a tourism hub.

Taking a jibe at Modi, Gandhi said he was not here to tell his 'Mann Ki Baat', but understand the various difficulties, including the night travel ban, man-animal conflicts and lack of medical facilities being faced by the people here.

"I understand there are complex problems here. There are man-animal conflicts.

There is a conflict between development and environment... I want to see a solution. I don't believe in imposing a solution. I believe in the wisdom and intellectual of our people in resolving such issues," Gandhi said.

"I am not like the prime minister. I am not going to make false promises and tell you I will give you two crore jobs or Rs 15 lakh in bank accounts or that I will give farmers
whatever they want.

I am not going to lie to you. Because I respect your intelligence.. your wisdom," Gandhi said. 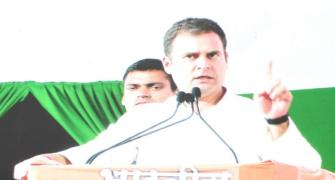 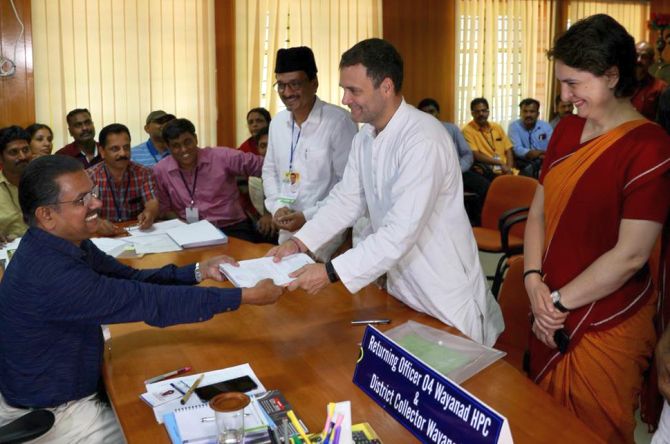