In Delhi, they see Indira in Priyanka

Residents said that the Congress leader was a spitting image of her grand mother and her entrance into politics had lent fresh energy to the party. 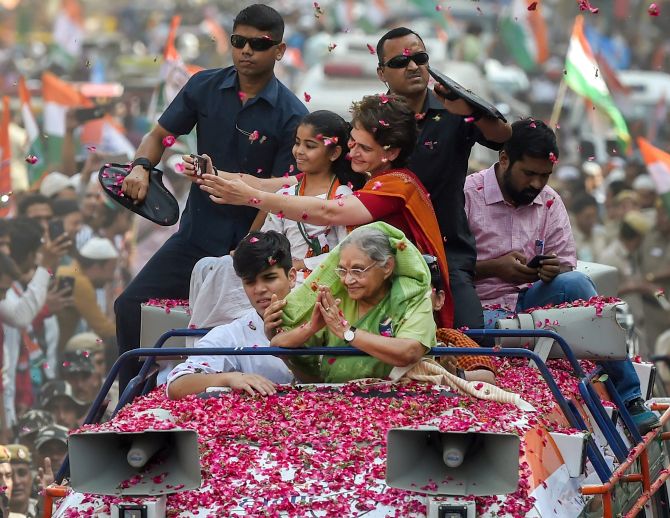 As Congress leader Priyanka Gandhi Vadra held impressive back-to-back roadshows in Delhi, many residents said her face and mannerisms reminded them of her grandmother Indira Gandhi.

Neighbours Urmila and Munni in South Delhi's Madangir area, stood on a road divider and waved at Priyanka Gandhi as her caravan passed through busy streets on Wednesday.

"She's a spitting image of Indira Gandhi. She looks just the same, same hairstyle, she reminds us of our Indiraji," said an excited Urmila.

They both said they had seen former prime minister Indira Gandhi during rallies and felt Priyanka Gandhi's playing a larger role in the party has "revitalised" the party.

"I had seen Indira Gandhi at a rally in Aligarh... Today, when Bharatiya Janata Party politicians attack Nehruji or other members of the Nehru-Gandhi family, our affection for the family only multiplies," Munni said.

The roadshow in South Delhi on Wednesday evening, held in support of her party's South Delhi candidate Vijender Singh, began around 7 pm from Virat Cinema and culminated at 8 pm at Tigri traffic intersection on Mehrauli-Badarpur Road spanning about 3 km. 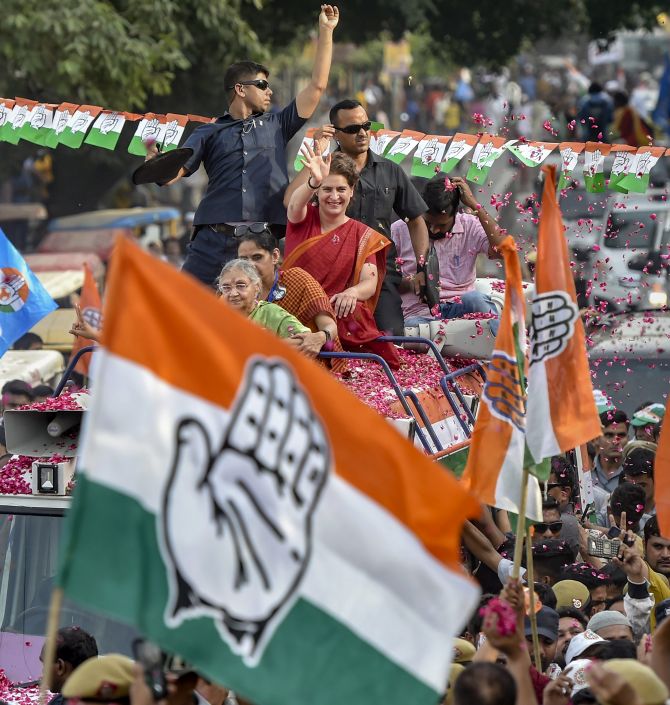 Congress supporters, some dressed in party colours, other sporting T-shirts bearing image of the Olympian boxer Singh and others waving party flags lined the entire route and chanted slogans like -- "Boxer bhai zindabad, Priyanka Gandhi zindabad", as the duo waved at the elated crowd that included people of all ages.

Among the crowd was former Congress councillor from Delhi Om Wati, 54, who also said, "Priyanka Gandhi reminds me a lot about Indira ji."

"I have seen Indira Gandhi several times and Priyanka Gandhi waved and interacted the same way. Her looks, her mannerisms, way of talking to people, is just so uncannily similar to her grandmother. And her entering politics has lent fresh energy to the Congress. Our party will do well," she said.

Priyanka Gandhi, wearing a maroon saree and perched atop a white SUV alongside Singh, traversed through the dusty streets of South Delhi, including Indira Camp near Virat Cinema.

Along the route, she obliged a few supporters with a selfie and also greeted people who had stationed themselves in their home's balconies to catch a glimpse of her. 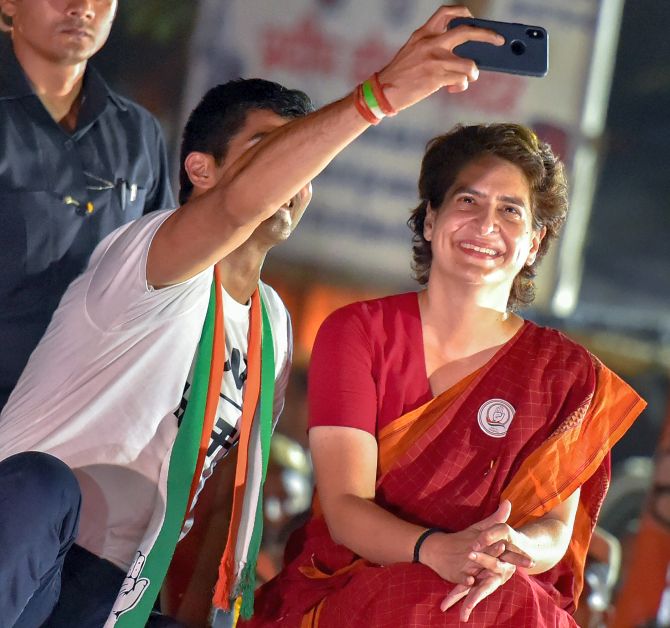 Along the streets, people of all ages and various religions stood in support of the party and many made videos on their mobile phones.

Ayan, a class four student, who was standing at a road divider in Madangir area, when asked, whose roadshow was it, replied innocently, "Indira Gandhi," much to people's amusement.

His friend, Shanker, standing beside him, smiled and corrected him, "She is Priyanka Gandhi." 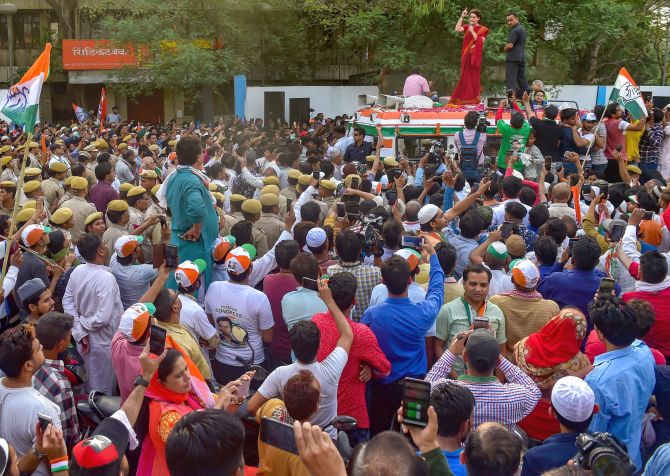 IMAGE: Many at the roadshow believe that Priyanka has infused a new life into the party. Photograph: Manvender Vashist/PTI Photo

But not everyone knew what was going on, as Rajni, a labourer hailing from Jhansi, who lives in a J J Colony in Madangir, thought it was the roadshow of Congress president Rahul Gandhi.

The back-to-back roadshows from Gandhi came days ahead of the Lok Sabha election in Delhi on May 12.

Hours before the South Delhi roadshow, she had also held one for Congress veteran and North East Delhi candidate Sheila Dikshit.