A 56-year-old man died allegedly due to drowning after his mini-truck was submerged in water under the Minto Bridge in central Delhi, following a heavy downpour in the city on Sunday morning, police said. The man, identified as Kundan Kumar, was a resident of Pithoragarh, Uttarakhand. He was driving a Tata Ace from the New Delhi Railway Station to Connaught Place when he got stuck in the waterlogged area, they said.

While he was trying to manoeuvre his vehicle through the waterlogged underpass, Kumar got stuck and allegedly died due to drowning, said a senior police officer.

He used to drive the vehicle, owned by his cousin Pritam, to transport goods, police said.

Kumar used to live near a taxi stand in Shankar Market area and is survived by his wife and two daughters, they said.

His body has been shifted to a mortuary at Ram Manohar Lohia Hospital wherein it will be handed over to his family after a post-mortem. 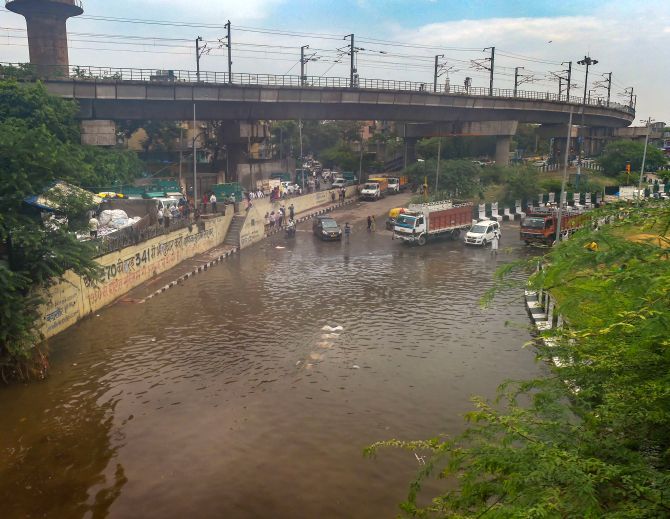 Police said they suspected that he died due to drowning since no external injury marks were found on his body.

Inquest proceedings have been initiated in this regard, they said.

The national capital received its first spell of heavy rains, which led to waterlogging in low-lying areas and brought traffic to a standstill at key stretches in the city.

Meanwhile, a DTC bus and two auto-rickshaws were stuck at the Minto Bridge underpass due to waterlogging, following which three people were rescued, Delhi Fire Service officials said.

A call regarding the stranded vehicles at the Minto Bridge underpass was received around 7.54 am. A team from the Delhi Fire Service was rushed to the spot for rescue work, Atul Garg, Director, Delhi Fire Service, said. 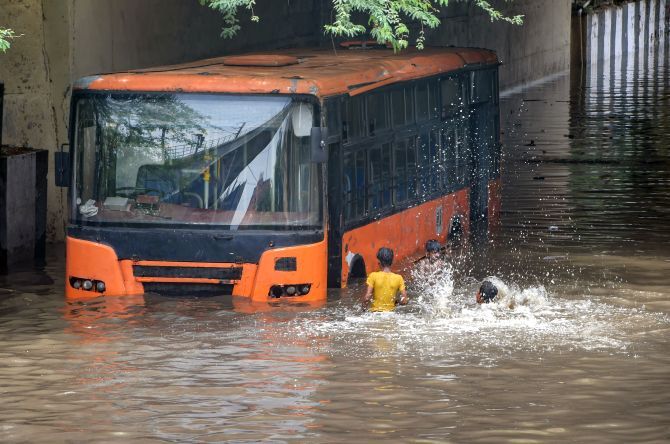 "A DTC bus and two autos were trapped due to waterlogging. The driver and conductor of the bus and an auto driver were safely rescued by our personnel. There was no passenger in the bus," he said.

The fire service personnel used a ladder to bridge the gap from a footpath and the low floor bus, which was submerged in the heavily waterlogged underpass, to rescue the stranded.

Waterlogging at the concave railway underpass (Minto Bridge) during the rainy season is a recurring issue. 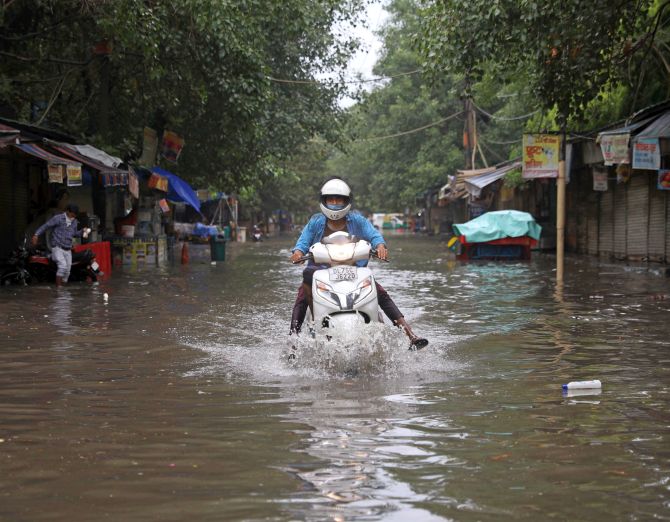 IMAGE: A man rides a two-wheeler on a waterlogged road in New Delhi. Photograph: ANI Photo

Incidents of vehicles getting stuck and people being rescued have been reported in the past as well.

According to the Delhi traffic police, jams were reported from Azadpur to Mukarba Chowk, Yashwant Place to Ashoka Road, at Ring Road, Bhairon Road, and near Mundka metro station due to heavy waterlogging.

The India Meteorological Department said the Safdarjung Observatory, which provides representative figures for the city, recorded 74.8 mm rainfall till 8:30 am. 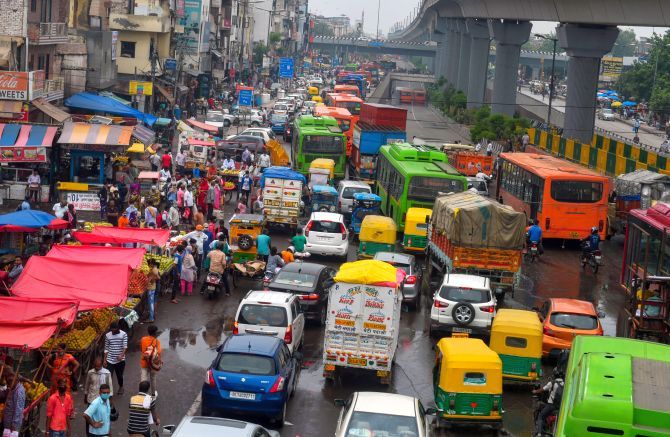 Residents shared on social media videos and pictures of rainwater gushing into their houses and vehicles navigating waterlogged roads.

The Youth Congress also shared a video of their inundated Raisina Road office.

The rains also led to power outages in some areas.