Incessant rains in some districts of Saurasthra in Gujarat have led to a flood-like situation in the region, leaving three persons dead, the state government said on Saturday.

The highest rainfall of 350 mm in the last 24 hours was recorded in Chotila of Surendranagar district. According to Chief Minister Vijay Rupani, the weather department has given a warning of heavy rains for the next 48 and state administration has been asked to remain alert. 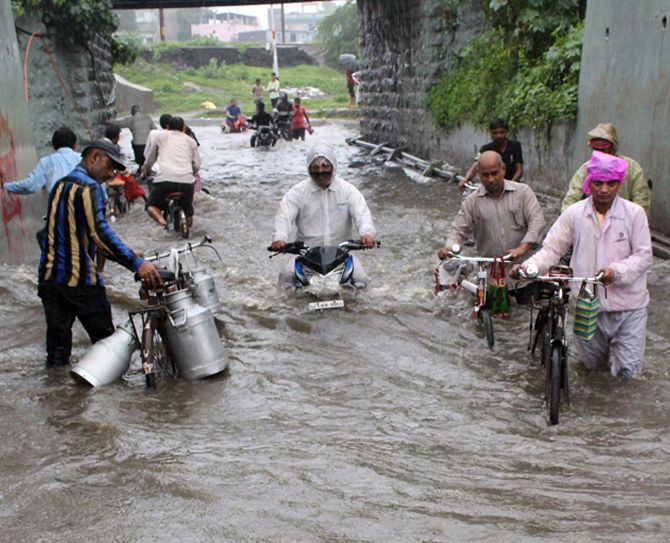 The National Disaster Response Force, the Air Force and teams of other agencies have been pressed into service and they have so far rescued 214 stranded people. Over 6,200 people in the region have been shifted to safer places. Ten state highways and many roads have also been damaged.

Rupani on Saturday held a review meeting with the government officials at the state disaster control room in Gandhinagar and took stock of the situation and the rescue operations.

“Surendranagar, Rajkot, Morbi, Amreli, Junagadh, Gir Somnath districts in Saurashtra region have received heavy rains in the last 24 hours. Ahmedabad and other parts of North Gujarat till Mandal are witnessing heavy rains since this morning,” the chief minister told reporters.

The highest rainfall of 350 mm was recorded in Chotila of Surendranagar district, while Vadia in Amreli district received over 250 mm rainfall, he added.

“Three people have died due to drowning in the last 24 hours,” Rupani said.

While one of them died in Rajkot, the details regarding the two other deceased were yet to be known. 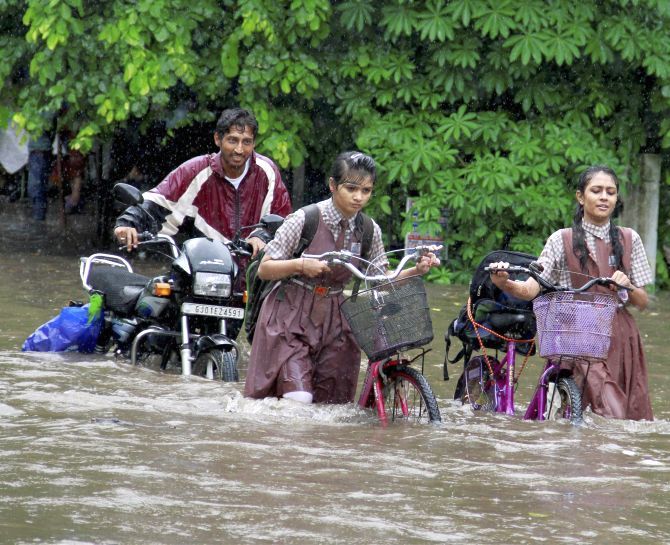 IMAGE: School girls and a biker wade through a flooded steet after heavy downpour in Ahmedabad. Photograph: PTI Photo

The NDRF, IAF and state rescue teams have so far rescued 214 people, stranded at different places, Rupani said adding that 6,235 people have been shifted at safer places from low lying areas near rivers and dams.

“Ten state highways and 65 roads have been damaged due to the rains. Work is on to restore roads,” he said.

Rajkot-Ahmedabad national highway has also been closed due to water-logging, which led to traffic jams.

“We have instructed district administrations to be alert and all help is being provided to the people affected by heavy rains,” Rupani said.

Heavy rains have thrown life out of gear in many parts of the state.

“Over 700 people have been shifted to safer places. The NDRF team has rescued over 16 people, who were stranded in flood waters in various parts of the district,” he said. 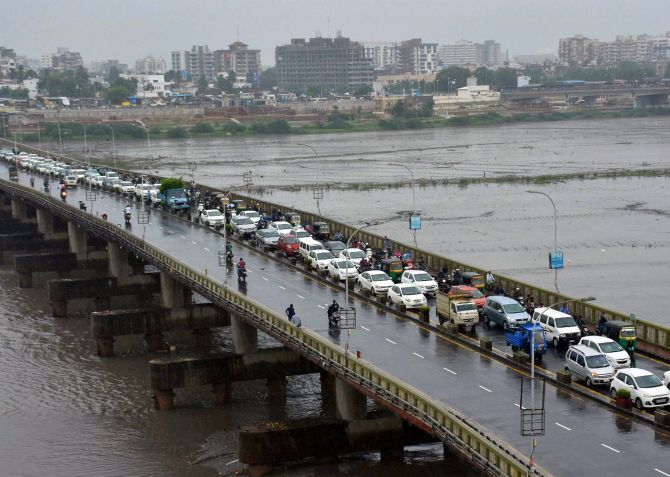 Rajkot Municipal Corporation Commissioner B N Pani said, a two-storey building located in Hathikhana area of the city collapsed, but no causality were reported.

“The city received over 72 mm of rainfall as Lalpari reservoir has overflown and nearly 60 people living in the surrounding areas have been shifted to safer places,” Pani said.

Surendranagar is the worst-affected district in the Saurashtra region. The NDRF team has rescued over 15 people in the town.

Catchment areas of most dams and reservoirs in Saurashtra region received good amount of rain water.

Heavy rains also continued to lash Ahmedabad and the city received over 100 mm of rainfall since Friday night. Water logging was observed in several low-lying areas of the city. 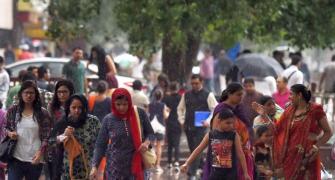 'Thank god for the rains!' Delhi rejoices after showers 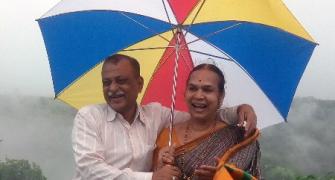 Monsoon pics: Romance in the rains 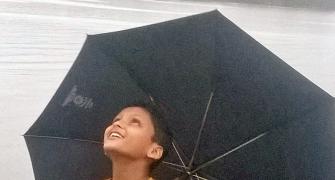 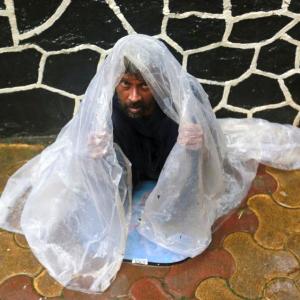 With 127 mm of rain, Monday was Mumbai's wettest July day in 3 years