The EC received complaints from five places that EVMs were connecting to external devices via bluetooth, but after inquiry, it was found that there was 'no substance' in the complaints. 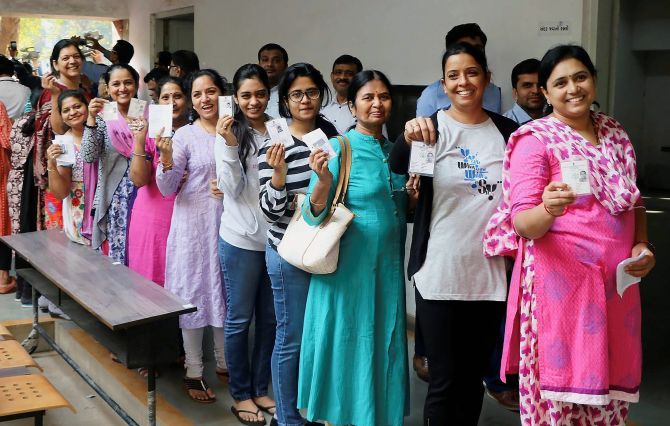 IMAGE: People wait in a queue to cast their votes for the second phase of assembly elections in Ahmedabad on Thursday. PTI Photo

Voting ended in 93 assembly seats in north and central Gujarat in the second and final phase of polling on Thursday during which Prime Minister Narendra Modi also cast his ballot.

Those in queue at polling stations were allowed to vote even after the closure of polls, State Election Commission officials said.

Of the 14 districts that went to polls in the second phase, Sabarkantha recorded 77 per cent voting, the highest, while Dahod registered 60 per cent, the lowest.

Around 2.22 crore people were eligible to exercise their franchise to choose their representatives from among 851 candidates in the fray. 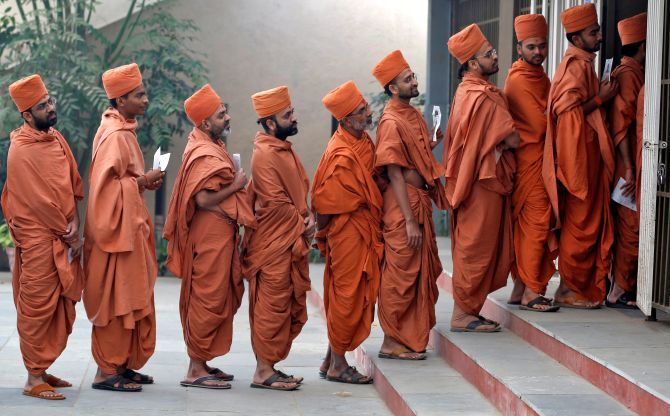 IMAGE: Hindu priests stand in a queue to casts their votes at a polling station. Photograph: Amit Dave/Reuters

A voter turnout of 68.70 per cent was recorded in the second phase, the EC said.

While the polling was largely peaceful, two incidents of clashes were reported in Mehsana and Vadodara districts, police officials said.

The EC received complaints from five places that electronic voting machines were connecting to external devices via bluetooth, but after inquiry, it was found that there was 'no substance' in the complaints, poll officials said. 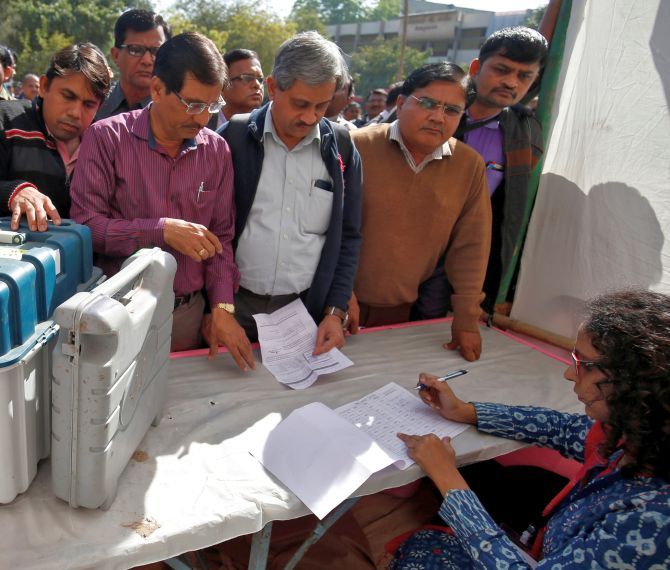 IMAGE: A polling official checks serial numbers on the Voter Verifiable Paper Audit Trail machines at a distribution centre ahead of the final phase of voting in Gujarat state assembly election in Ahmedabad. Photograph: Amit Dave/Reuters

Complaints of EVMs getting connected to the external devices via bluetooth were received from Patan, Kheda, Mehsana districts, Ghatlodia in Ahmedabad district and Godhra in Panchamahal district.

On Saturday, during the first phase of the assembly polls, the Congress had complained that some EVMs in Porbandar were connecting to external devices via bluetooth. However, the EC had said that the apprehension of possible EVM tampering through bluetooth technology was baseless.

The EC on Thursday said that there were reports of malfunctioning of EVMs and voter verifiable paper audit trail at some places in Aravalli and Panchmahal districts.

Giving details of the two clashes, a police officer said at least three persons were injured in the first incident at Hasanpur village of Visnagar taluka in Mehsana, where workers of two different parties came to blows.

"The situation was under control and the polling process was not affected," Mehsana Superintendent of Police (SP), Chaitanya Mandlik, said.

Another incident took place at Wankaner village of Savli taluka of Vadodara district, where some villagers got into a scuffle, the officials said.

The EC said 120 ballot units, 102 control units of the EVMs and 409 VVPATs were replaced during the poll, and there was 'no case of EVMs recording or pressing the wrong vote'. 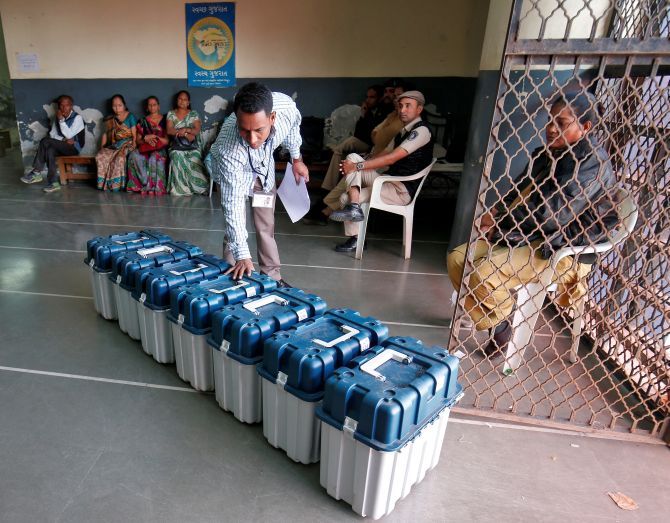 IMAGE: A polling official prepares the polling booth ahead of the second phase of voting.
Photograph: Amit Dave/Reuters

"The replacement was 0.3 per cent in ballot units and control units and 1.5 per cent in VVPATs. All these cases were of non-functioning of the EVMs because of the button getting stopped or the display of the printer or the battery failing," Saxena said.

Despite the morning chill, people could be seen queuing up outside the polling booths even before voting began at 8 am.

The prime minister cast his ballot after waiting in a queue at a polling booth in a school in Sabarmati constituency of Ahmedabad district.

The prime minister's mother Hiraba, who is in her 90s, cast her ballot at a booth in Gandhinagar.

Patidar quota agitation spearhead Hardik Patel and OBC leader Alpesh Thakor, who joined the Congress and is contesting from Radhanpur, voted in Viramgam.

Gujarat Chief Electoral Officer B B Swain told reporters that polling took place in more than 25,000 booths across 14 districts. 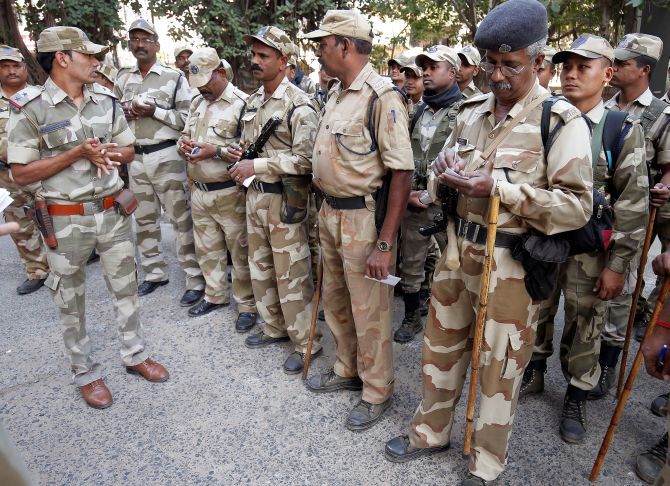 "We were live web-casting from 1,700 booths. Security had been properly deployed and the staff reached on time," he said.

"We gave proper instructions to ensure that EVMs which face problems were changed in time so as to avoid any delays encountered during the first phase of polling," Swain said.

Around 2.22 crore voters were eligible to exercise their franchise to choose between the two main contenders -- the BJP and the Congress -- in the state which witnessed an acrimonious campaign.

A total of 851 candidates were in the fray for the second phase.

The first phase of voting for the 182-member House, held on December 9, covered 89 seats.

The election is being seen as a 'prestige battle' for the prime minister and a litmus test for the leadership of Congress president-elect Rahul Gandhi.

The votes will be counted on December 18. 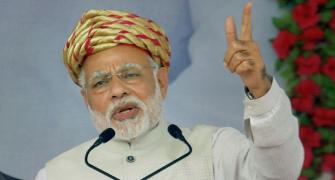 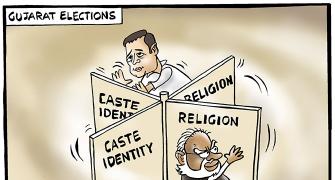 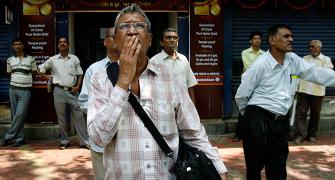 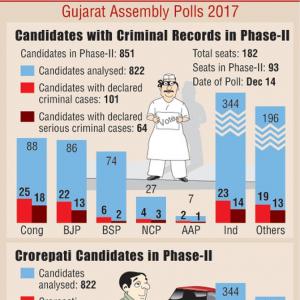 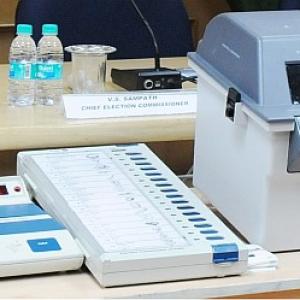 Why EVM is the real enemy for Muslim voters in Gujarat