Fresh restrictions were imposed in parts of Srinagar as a precautionary measure to maintain law and order in view of Friday congregational prayers, officials said. 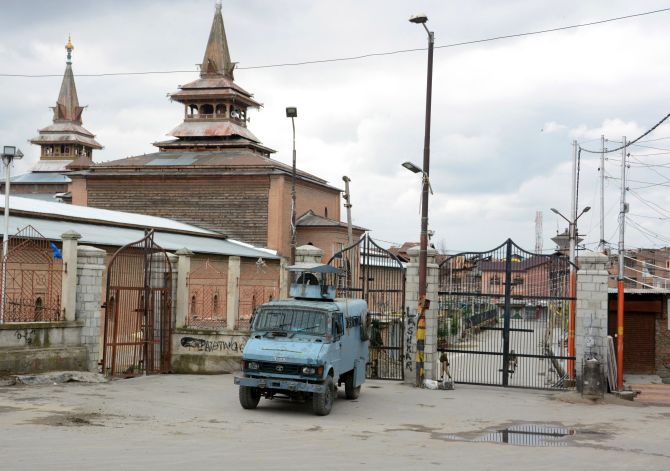 They said the curbs were imposed in Anchar area under the jurisdiction of police station Soura and the areas around the historic Jamia Masjid in police station Nowhatta.

The authorities have been imposing restrictions in vulnerable areas of the valley on Friday, apprehending that vested interests might exploit large gatherings at big mosques and shrines to fuel protests.

Friday prayers have not been allowed at Jamia Masjid -- the grand mosque of Kashmir in downtown (old city area) -- for the past over two months now.

Restrictions were first imposed across the Kashmir Valley on August 5 when the Centre announced its decision to abrogate Article 370 of the Constitution and to bifurcate the state into two Union territories. The restrictions were lifted in phases from the valley as the situation improved with the passage of time. Meanwhile, normal life remained affected across the valley for the 75th consecutive day on Friday.

Shops opened for few hours early in the morning in some areas including in the commercial hub of Lal Chowk in the city here, but the main markets and other business establishments were shut, the officials said.

Private transport was plying unhindered in the city here and elsewhere in Kashmir, the officials said.

Autorickshaws and few inter-district cabs were also seen plying in few areas of the valley, they said. However, the other modes of public transport were off the roads.

Schools and colleges were open, but students stayed away as parents continued to keep their wards at home due to apprehensions about their safety, the officials said.

Mobile services were restored in Kashmir on Monday, but the SMS facility was snapped once again later that night due to apprehensions of the services being misused. Internet services -- across all platforms – continued to be snapped in the valley, they added.

Another former chief minister and sitting Lok Sabha MP from Srinagar Farooq Abdullah has been arrested under the controversial Public Safety act.