The two parties, however, are in a neck-and-neck race in Manipur and Goa. 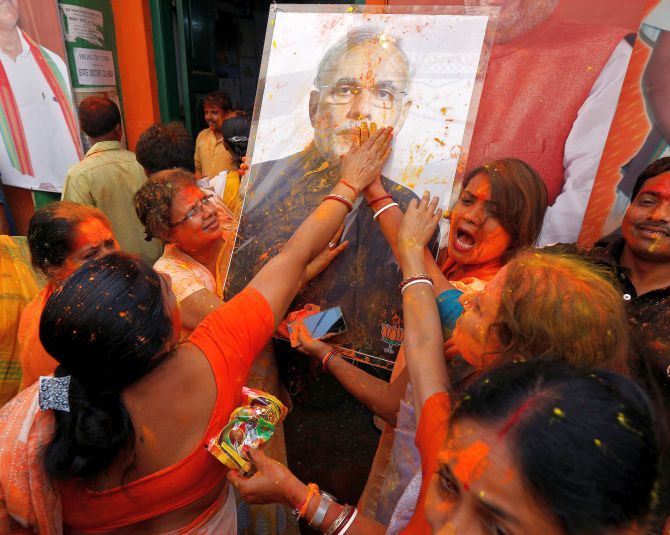 The Bharatiya Janata Party on Saturday stormed back to power in Uttar Pradesh and Uttarakhand securing landslide wins while the Congress achieved a similar feat in Punjab and emerged as the single largest party in Goa and Manipur which threw up a hung assembly.

Anchored by Prime Minister Narendra Modi and party president Amit Shah, the BJP juggernaut rolled on in UP and in the neighbouring state of Uttarakhand, bagging three-fourth majority. The popular Congress Chief Minister Harish Rawat lost both seats that he contested in the hill state.

The BJP is returning to power in the politically crucial state of UP after a gap of 15 years during which regional parties such as the Samajwadi Party and the Bahujan Samaj Party held sway.

As the assembly elections in the five states turned into a virtual referendum on Modi's popularity and demonetisation, the BJP decimated the ruling SP, its alliance partner Congress and Mayawati's BSP in UP.

After a hiatus of 10 years, the Congress led by former chief minister Capt. Amarinder Singh stormed to power in Punjab getting 77 seats, falling just one seat short of two-third majority.

It was a birthday present for Amarinder who turned 75 on Saturday as the Congress routed the SAD-BJP combine and dashed hopes of Arvind Kejriwal-led AAP, which was confident of sweeping the assembly polls on its debut.

BJP leaders hailed the spectacular victories of the BJP as a vindication of Modi's popularity and his pro-poor policies with some calling it a "tsunami".

Shah, who crafted and conducted the election strategy in UP, said that the results have catapulted Modi to the stature of the "tallest leader" since independence.

"The only factor for the win is the performance of the Modi government," Shah told a press conference in Delhi. "The outcome has shown the faith the poor have reposed in Modi. Even his political rivals will have to admit that he has emerged as the tallest leader in the country since independence," he said.

"This is the victory of the corruption-free rule and pro-poor policies under the leadership" of Modi, he tweeted earlier.

At the end of vote counting, the BJP bagged 312 seats on its own with a nearly 40 per cent vote share and with allies Apna Dal (Soneylal Patel) and Suheldev Bhartiya Samaj Party their strength goes up to 324 in a House of 403. The BJP had just 47 seats in the outgoing House. 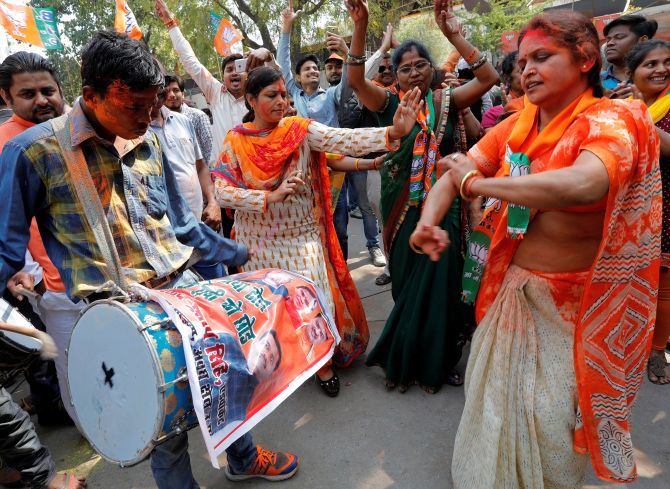 IMAGE: It's time to dance! BJP supporters are in a joyous mood as the results of their victory in UP pour in. Photograph: Pawan Kumar/Reuters

The previous best showing by the BJP in UP was in 1991, at the height of Ram Janam Bhoomi movement, when it got majority on its own winning 221 seats out of 425 in an undivided state.

The highest number of seats bagged by a single party in the UP assembly polls was in 1977 when Janata Party got 352 seats when Uttarakhand was part of the state.

The BJP had not put forward any chief ministerial candidate in UP where it also did not put up any muslim candidate.

The UP chief minister will be selected tomorrow by the BJP parliamentary board and the legislature party in the state.

The ruling SP whose campaign was steered by Chief Minister Akhilesh Yadav on development agenda received a severe drubbing getting only 47 seats as against its previous tally of 224 while alliance partner Congress was reduced to single digits (7), down by 21 seats.

The SP received a major jolt in Lucknow Cantt seat where its patron Mulayam Singh Yadav's daughter-in-law Aparna Yadav lost to BJP's Rita Bahujuna Joshi, who left Congress ahead of the elections.

The BSP could garner only 19 seats in a huge slump from the previous tally of 80.

The results in UP and Uttarakhand set off celebrations in BJP offices and party strongholds. Party members danced and distributed sweets on streets and BJP offices.

Women gathered in groups to watch results on TV and danced as the results came in. One party leader said Holi, which will be celebrated on Sunday and Monday, has come a day early.

Winning 77 of the 117 assembly seats, the Congress stormed back to power in Punjab riding a strong anti-incumbency wave against the ruling SAD-BJP combine and warding off a spirited challenge by newcomer AAP.

The party put up its second best performance in the state. In the 1992 state elections, it had won 87 seats. With 77 MLAs it just one seat short of a two-third majority. The Congress had 46 seats in the outgoing House.

In addition, the Congress also won the bypoll to the Amritsar Lok Sabha seat.

The SAD-BJP alliance finished at number three spot in the state polls, behind AAP, which emerged as the largest opposition party with 20 seats.

However, the number fell way short of Arvind Kejriwal's claim that AAP will win 100 seats.

The Prakash Singh Badal-led SAD won 15 seats, down from its earlier tally of 56 seats while ally BJP bagged three seats against the 12 it had won in 2012.

At a packed press conference in Chandigarh, a beaming Amarinder Singh, who was the Congress' chief ministerial face, hit out at the SAD claiming it had brought the state "down to its knees" and mocked Kejriwal, saying he was like a "summer storm that had come and gone".

In Uttarakhand, the BJP bagged 56 out of 70 seats at stake in the state to storm to power reducing Congress to just 11 seats.

It is for the first time in the 16-year history of Uttarakhand that a party has emerged with an impressive tally like that recorded by the BJP.

The BJP suffered reverses in Goa where its tally was reduced to 13 from 21 in the 40-member house as the poll results threw up a hung assembly where opposition Congress emerged the single largest party with 17 seats.

Maharashtrawadi Gomantak Party, Goa Forward and Independents won three each and the Nationalist Congress Party bagged one seat. The majority mark is 21 seats.

Apart from humiliating defeat of Parsekar, who lost by over 7,000 votes, six ministers of the BJP also fell by the wayside.

The verdict would give smaller parties like newly formed Goa Forward and MGP with a role in ministry formation.

The poor showing of the BJP, which had won 21 seats last time, is also seen as a setback for Defence Minister Manohar Parrikar, who had led the campaign from the front, fuelling speculation he may return to his home state as chief minister.

Aam Aadmi Party, which hit the state with a big fanfare, drew a blank.

Congress sources said that as the single largest party, it would stake claim to form the next government and was confident of getting support from independents and others.

Shortly after the results were out, Parrikar said that the BJP remains in the race for forming the government.

"It is a fractured mandate. We are awaiting the response of smaller parties," he told reporters in Panaji.

Like in Goa, it was a hung House in Manipur with ruling Congress bagging 28 out of the total 60 seats and the BJP getting 21.

The Congress, which had won 42 seats in the 2012 assembly poll, suffered a jolt as it managed to capture only 28 seats this time but is in the race for government formation as it emerged as a single largest party.

The BJP, on the other hand, took a giant leap forward capturing 21 seats as the party had none in the outgoing House.

The BJP's vote share of 36 per cent is higher than 34.7 per cent secured by the Congress.

Human rights activist Irom Sharmila who had contested against Ibobi Singh, secured only 90 votes and was relegated to the fourth position.

Manipur PCC President T N Haokip said that his party would form the next government with the help of "like-minded secular and regional parties." 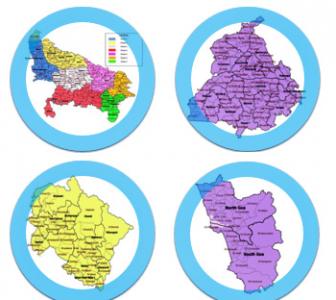 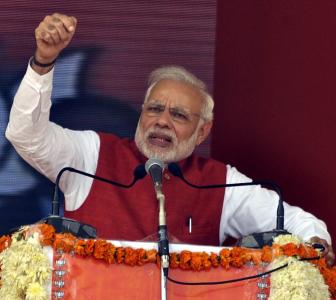 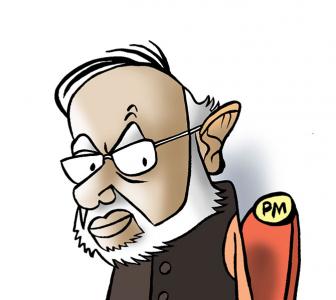 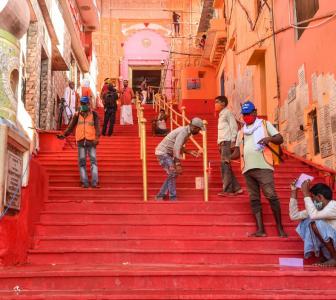 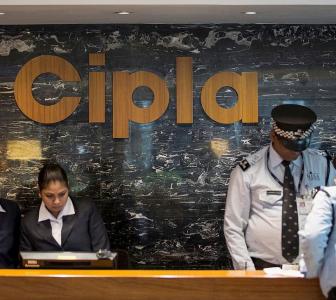 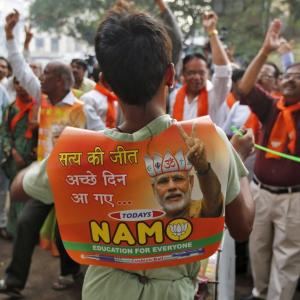 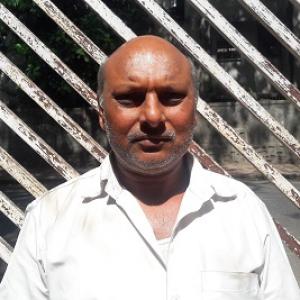