As many as 17 people were killed and two injured in a massive blaze at a firecracker storage unit in outer Delhi's Bawana industrial area on Saturday evening, a Delhi Fire Services official said, even as the state government ordered an inquiry into the incident. 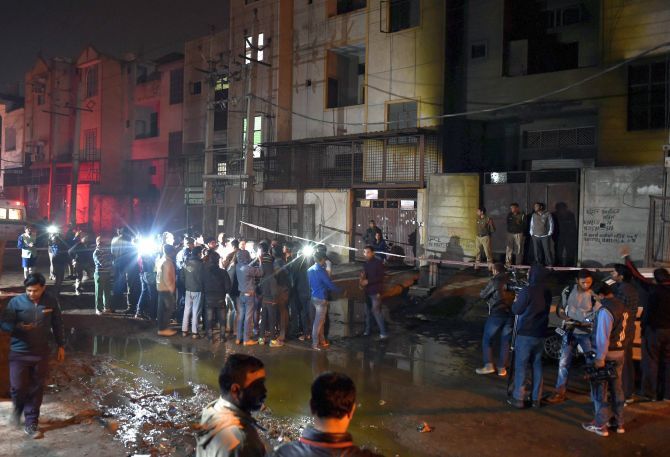 The fire, which started at the storage unit on the ground floor of a two-storey building, ripped through the structure, the official said.

The dead include 10 women and seven men, another fire official said, noting that a man and woman were injured.

The police said a first information report has been registered under Indian Penal Code sections relating to culpable homicide not amounting to murder, and negligent conduct with respect to fire or combustible material. The maximum punishment under the sections is 10 years.

The police said they have identified the owners and they will be questioned.

Gupta said on Sunday that Jain, the owner of the unit, has been arrested.

Gupta added that a case has been registered. 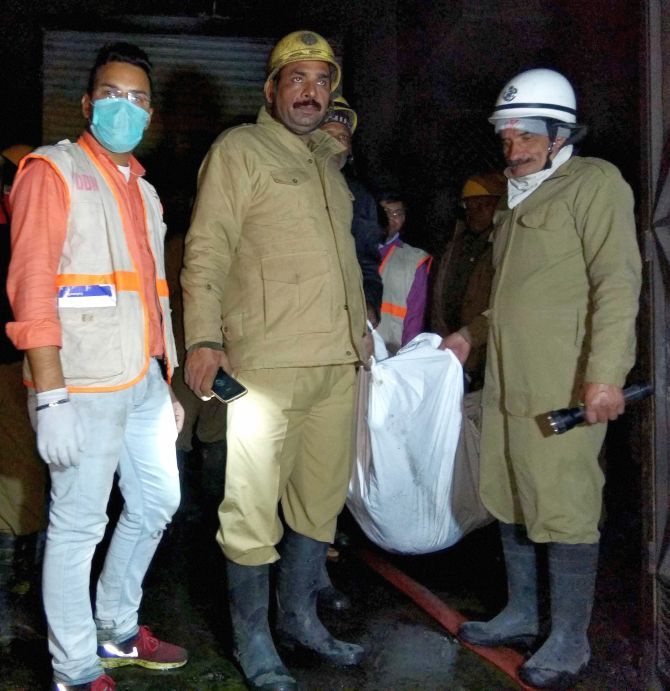 IMAGE: Fire fighters carry a body of a victim of fire at a factory in Bawana. Photograph: PTI Photo

The other partner of Jain has been identified as Lalit Goel.

One of the injured labourers told police that the firecrackers used to be brought from outside and were only packed at the unit. The police said they were verifying the claim.

While the fire department said the blaze occurred at a firecracker storage unit, the DCP said they are yet to confirm this.

He said it was a matter of investigation if firecrackers were being manufactured too.

"Investigation is on. Owners have been identified and will be questioned about the licensing aspect and negligence," said the officer.

The Delhi Fire Services received a call about the blaze at the factory around 6.20 pm and 10 fire tenders were rushed to the spot, the fire department said, adding the fire has been brought under control.

"One body was recovered from the basement, three from the ground floor and 13 from the first floor. One person sustained fractures after he jumped from the second floor to save himself," he said.

Mishra said the fire was doused by 9.20 pm but search and rescue operations were underway.

"We are taking no chance. We don't have a definite number of people who were in the building when the fire broke out," he said.

The police said the people were either charred or got choked to death. 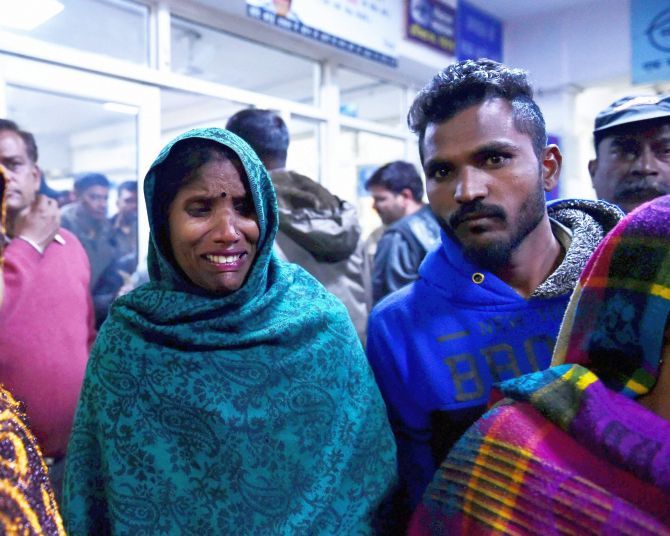 Prime Minister Narendra Modi expressed anguish at the death of people in the fire.

'My thoughts are with the families of those who lost their lives. May those who are injured recover quickly,' the Prime Minister's Office tweeted quoting Modi.

The Delhi government ordered an inquiry into the blaze even as Chief Minister Arvind Kejriwal said he was keeping a 'close watch' on the rescue operations.

'V(ery) sad to hear abt large no of casualties. Keeping a close watch on rescue operations,' he said in a tweet.

Kejriwal, who later visited the site in the night, announced a compensation of Rs 5 lakh each to the family of the deceased.

He said the truth will come out only after the inquiry, which has been ordered by the government.

A compensation of Rs five lakh each will be given to the next of kin of those who have lost their lives and Rs one lakh each to the two injured persons, he told reporters.

"Prima facie it appears packaging of the fire crackers were going on, but no machines have been found," he said. 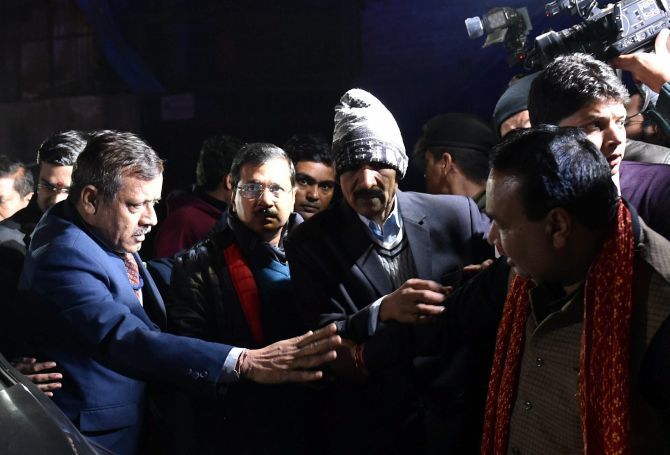 'Visited the site of #BawanaFire and #MahirshiValmikiHospital at Pooth Khurd, where two of the injured are being treated 24-year-old Roop Prakash and 45-year-old Sunita. Both have fractures on their legs and would require surgical interventions. Appear to be out of danger,' Vardhan tweeted.

'Saddened at the loss of 17 lives in the Bawana cracker factory fire. My thoughts are with the families of the persons killed in the mishap. Government should enforce strict safety regulations to such hazardous industries to avoid at least future accidents,' Vardhan said.

Satyendar Jain, also Delhi's urban development minister, said an inquiry has been ordered into the incident.

North Delhi Mayor Preety Agarwal rushed to the spot to take stock of the situation.

The medical superintendent of Dr Babasaheb Bhimrao Ambedkar Hospital Dr Punita Mahajan said they received a disaster alert which was called off at 11.30 pm. 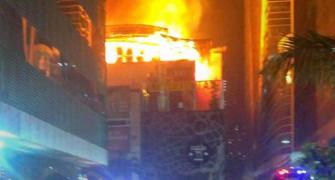