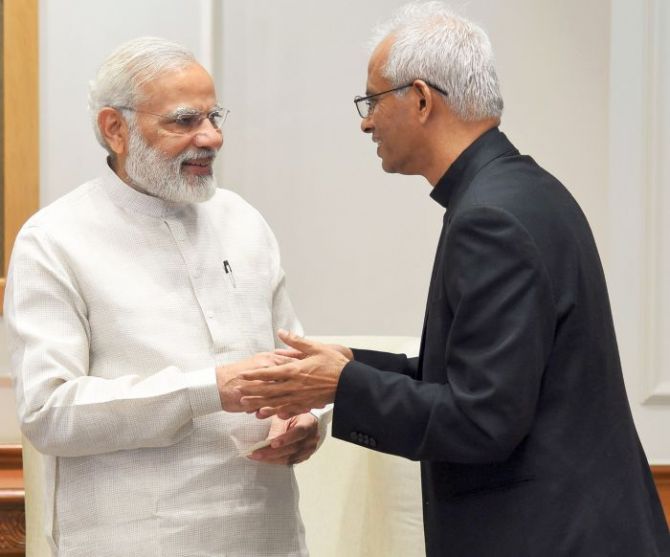 And that eternal hope did triumph over vicious circumstances, as after a-year-and-half in captivity the priest from Kerala today returned to his homeland, and thanked people of all faiths who prayed for his safety.

"I do not know how to thank God. He made it possible. My mind is clear. I thank the Almighty. I thank the government of India, of various other countries.

"The Hindu brothers who worshipped for my well-being, the Muslim brothers who prayed to Allah for my safety. I now belong to entire world," Uzhunnalil told reporters in New Delhi at a press conference hosted by the Catholic Bishop's Conference of India.

He belongs to the Congregation of the Salesians of Don Bosco, and was abducted reportedly in an incident of terrorist attack in Aden and taken to an undisclosed place.

The 59-year-old Catholic priest returned to Delhi on Thursday after rest and recuperation in the Vatican City.

"I weighed 82 kgs when I was abducted in March 2016", and on his return, the weighing scale plummeted to 55, the priest was quoted as saying in CBCI release.

At the start of the press conference, he said he would not be able to speak much as his health does not permit it.

"There was not a single time I cried for help or felt that I was going to be killed. At no point of time did I lose hope," he said in response to a question. 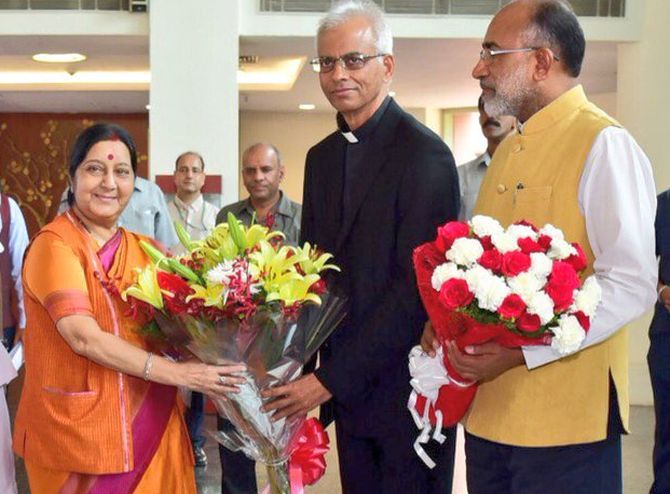 IMAGE: Uzhunnalil was abducted on March 4, 2016. He thanked the External Affairs Minister Sushma Swaraj for all the efforts to bring him home safely. Photograph: @SushmaSwaraj/Twitter

The Sacred Heart Cathedral in Delhi held a special mass on his safe return which was also attended by the Vatican's Apostolic Nuncio Giambattista Diquattro.

Besides, many nuns, pastors and other faithfuls from Delhi and other parts of the national capital region, flocked to the imposing red-and-white church to attend the congregation.

The priest, dressed in a black robe with a golden ornate cross dangling from his neck, said he prayed even for his captors and hoped God will "appeal to their good senses".

"I was kept in a room. I had no communication with the world outside for 18 months. I had a small sponge-like mattress on which I used to sit and sleep. I had fever twice but it did not persist. My captors gave me medicine to control my sugar level," he recalled, adding, "they never tortured me".

"They however, made me say certain unpleasant things on video. They (captors) spoke only in Arabic, which I couldn't understand and they did not seem to understand much English," he said.

Uzhunnalil reached Yemen in 2010 and was serving the Sisters of the Missionaries of Charity of St. Mother Teresa and the catholic population there.

Earlier, the priest met Prime Minister Narendra Modi and External Affairs Minister Sushma Swaraj, and thanked them for their support.

He is scheduled to leave for Bengaluru on Friday where he will meet cardinals and regional CBCI leaders at St. John's Medical College, the CBCI said. 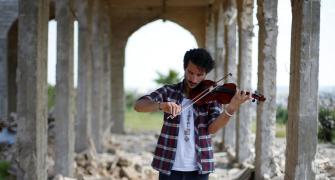 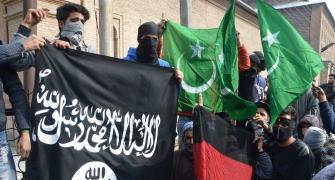