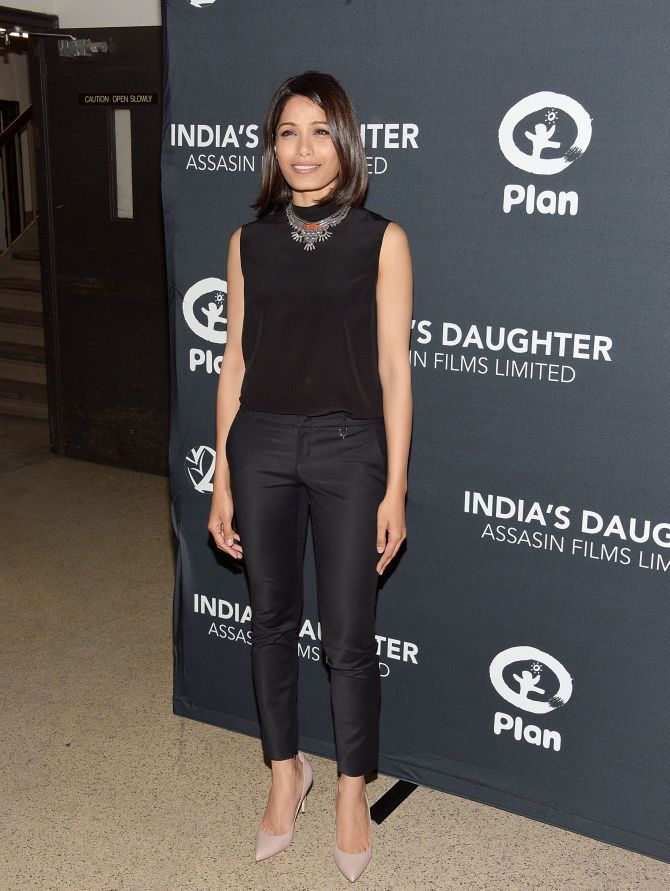 The BBC documentary, depicting the aftermath of the brutal gang rape and murder of a student in Delhi in 2012, has premiered in the United States with Oscar-winning actress Meryl Streep, Frieda Pinto and actor-director Farhan Akhtar in attendance as a show of support for the film banned in India.

Streep led a solemn opening of the 2012 gang-rape documentary 'Storyville: India's daughter' in New York, describing the 23-year old victim as "our daughter" and emphasised that tolerance and acceptance of violence against women is worse than the brutality that dehumanises them. She was joined by a star cast including actress Pinto, Akhtar, talk show host Tina Brown and former United Nations under secretary-general for humanitarian affairs and emergency relief coordinator Valerie Amos among others at the US premier of the documentary produced and directed by Leslee Udwin on Monday.

"What is worse than brutality that dehumanises women? Tolerance and indifference towards it, acceptance that this is just the way things are. What is worse than rape, violence, cruelty? Tolerance for it. That's worse," Streep said to a packed theatre at the Baruch College of the City University of New York where the premier was presented by NGO Vital Voices Global Partnership and children's development organisation Plan International. 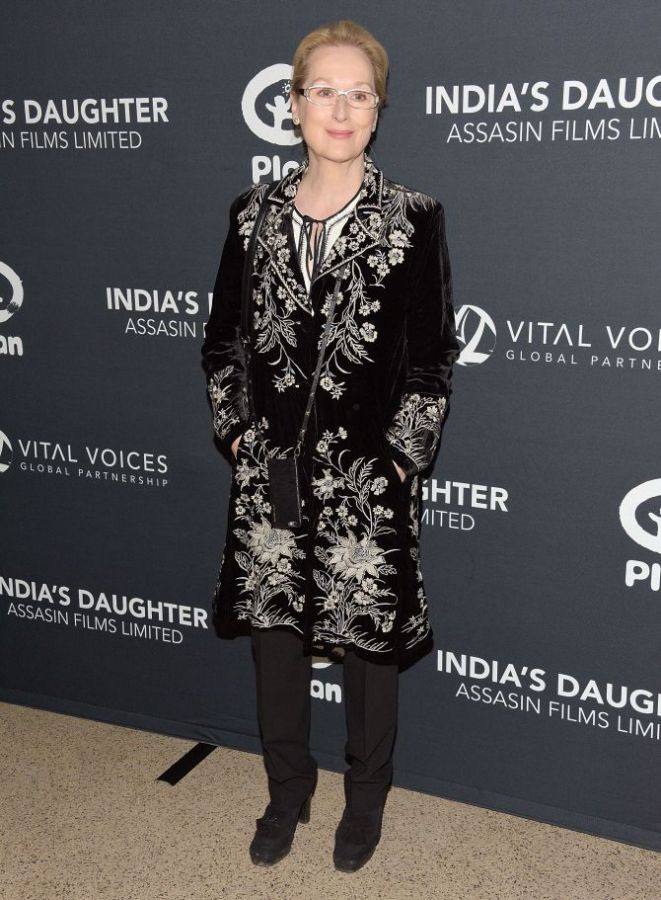 A solemn Streep was joined by the other celebrities and activists on stage as they began the premier by lighting a candle in the honour of the young paramedical student who died days after she was brutally gang-raped by six men on December 16, 2012.

Streep, Pinto and Udwin referred to the victim by her actual name as they addressed the audience, which watched the hour-long documentary in stunned silence, gasping as it heard the accused Mukesh Singh recount the inhuman incident in an unrepentant tone.

Streep said that the victim's name was not known for days after the tragedy and she was called "India's Daughter". "For weeks after her death, she was nameless, she was known as India's daughter. Tonight she is our daughter too," Streep said. "Tonight we light the magic candle to honour the value of the girl's short and promising life," Streep added and quoted the victim's father who had said that in death, his daughter has shown light to a greater movement of achieving equality for women and ending discrimination.

Udwin, who received a thunderous applause at the conclusion of the documentary, said while the Indian government has banned the documentary, there are "many forward looking people in India who will call for change in response to this rape."

"Tonight is the start of the global campaign for India's Daughter to end violence against women," Udwin said as she called on her family and her team on stage to thank them for the efforts that went into making the documentary. She called on nations and its citizens to join hands to bring an end to discrimination and violence against women, stressing that the disease plaguing the society is not rape or trafficking but inequality.

"Let us imagine a world where women are autonomous without rape, violence, genocide. Now let's go get that!" Change of mindset is the biggest ask we can make. You can move mountains with a film. The disease is not rape or violence or trafficking, the disease is gender inequality. Let us not let one day pass without doing something to address gender inequality," Udwin said. 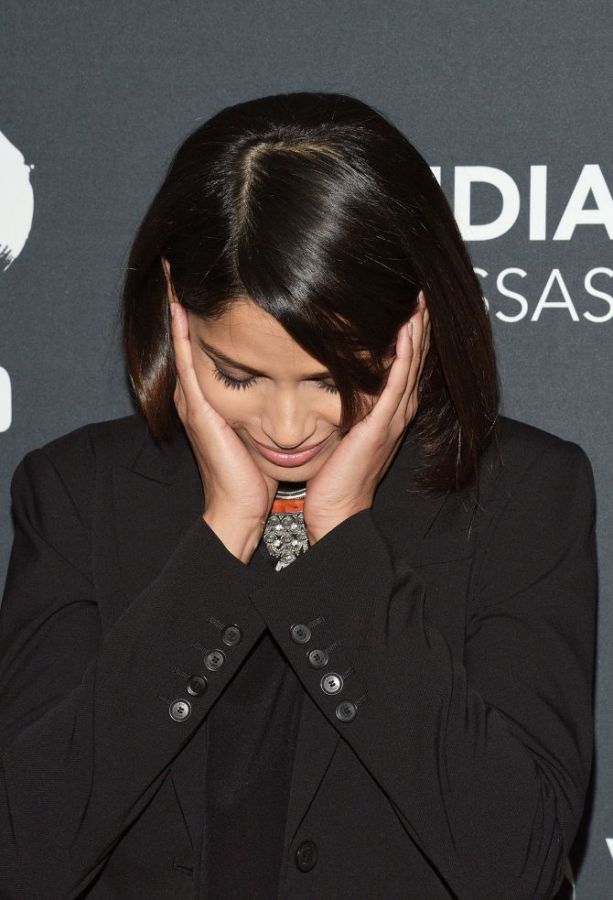 Pinto urged men, women, policy makers, youth, religious and political leaders from across the world to join forces and ensure violence against women is "receded into the past". "Our pride (in economic and scientific achievement) is misplaced when there is one gender on this planet that is yet to be emancipated," she said. Pinto said the discrimination that women face is not just sexual and restricted to less developed nations but is evident, particularly in the developed world, in the "refusal to pay a woman same as a man for the same job." She said she will use the occasion to make a "call to arms" to the youth to become the "new greatest generation" that begins to make the suffering and violence against women recede in the past. While there is a sense of urgency among people today to see an end to discrimination, Pinto said it is "very easy to get discouraged and enraged when one faces dead ends, such as bans."

She said people must take hope not only from the women but also from the men in their lives who are "torchbearers" and who will speak out "vociferously" against sexism in the work place and against violence in their homes. "This is your fight too," she said to the men. Pinto further said that there is need for the leaders of the democracies like India and the US to "face the dark reality of sexual violence."

"The shame is not in admitting the existence of such violence, the shame is in the crime and in not speaking out," Pinto said. To the religious leaders and clerics, she said they have the power to grant women honour or disrespect in their faiths. "Please choose honour," Pinto said.
She called on the women "to raise each other up" and to make each others' welfare a priority and to "never shame a woman for the choices she makes."

"Don't judge her for her marital status, do not judge her for whom she sleeps with and please do not judge her if she simply goes out to see a movie with her friend," the 'Slumdog Millionaire' actress said, adding that women should refuse to internalise centuries of women hating. An emotional Pinto asked the audience to keep the young victim in their thoughts and to remember that through her sacrifice she is "saying please don't let anyone put out my light again." 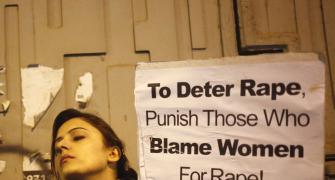 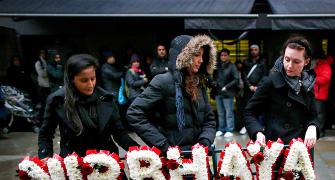 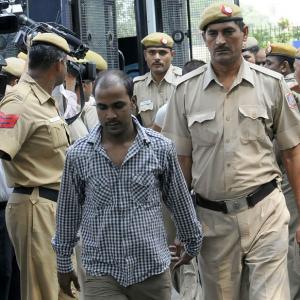