A total of 357 fishermen, including 71 from Tamil Nadu, stranded in sea due to Cyclone Ockhi, were rescued, Defence Minister Nirmala Sitharaman said on Sunday. 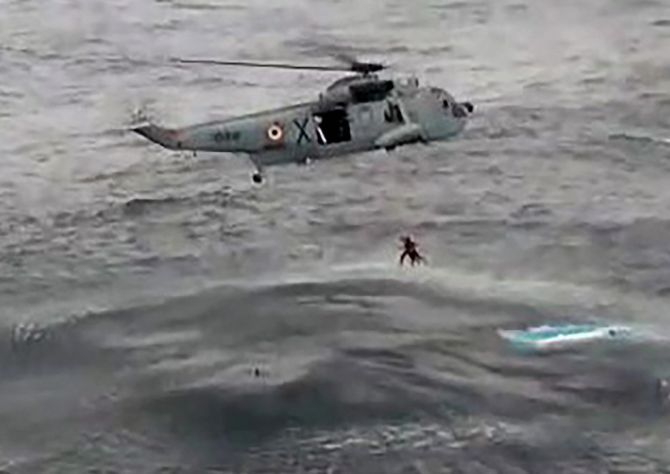 A photograph on her official Twitter handle showed her inside a helicopter reviewing the search and rescue operations in Tamil Nadu's Kanyakumari.

"An update on the search and rescue efforts being done by the Indian Navy, Coast Guard and Air Force to save the lives of fishermen affected by #CycloneOckhi: 357 fishermen have been saved as of 10 am today," she wrote on her official Twitter handle.

In a tweet, she said the Navy rescued 121 fishermen from Kerala and Air Force rescued 15.

While the coast guard saved 71 fishermen from Tamil Nadu and 114 from Kerala, merchant vessels and trawlers saved 36 off the coast of Kerala and Lakshwadeep islands. 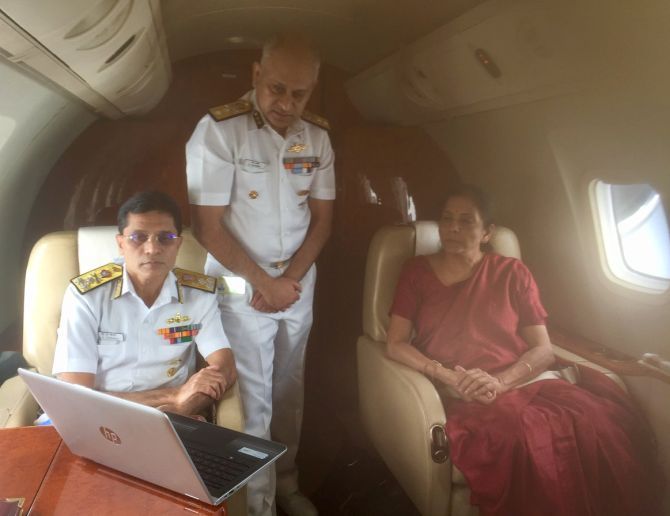 IMAGE: Defence Minister Nirmala Sitharaman on her way to Kanyakumari to review the search and rescue operation. Photograph: @DefenceMinIndia/Twitter

On her arrival in the worst-hit Kanyakumari district by helicopter from Thiruvanathapuram in Kerala, Sitharaman held discussions with deputy chief minister O Panneerselvam, ministers and officials.

Sitharaman was received by senior officials and others including Tamil Nadu BJP president Tamilisai Soundararajan.

A picture on her Twitter handle showed her holding discussions with Panneerselvam, ministers and officials.

She is slated to visit areas including Nagercoil, Neerodi and Susheendram besides holding discussions with local fishing folk, a defence public relations officer said. 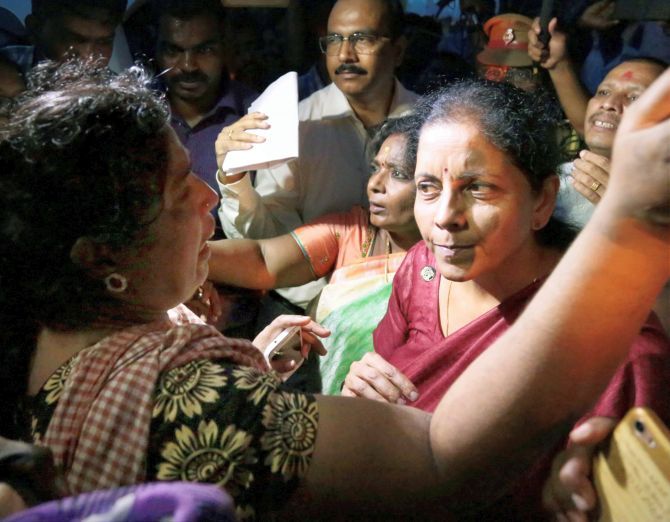 Posting a fact-sheet, Sitharaman said since November 30, the Coast Guard deployed two ships, an equal number of fixed wing aircraft and one helicopter for search and rescue of Tamil Nadu fishermen.

Similarly, the Coast Guard deployed seven ships in Kerala and one in Lakshadweep islands.

On Saturday, the Navy deployed eight ships, two FWA and four helicopters for Kerala, besides two ships and two FWA for Lakshadweep islands for search and rescue operations. The Airforce deployed two helicopters for Tamil Nadu and Kerala.

Meanwhile, Chief Minister K Palaniswami said in Coimbatore that work to rescue fishermen was on in full swing with the Air Force, Navy and Coast Guard deploying aircraft and ships.

"Amma's (late Jayalalithaa) government will rescue all the stranded fishermen," he said.

Power connection will be fully restored in a day or two in cyclone-hit Kanyakumari district, the chief minister said. IMAGE: A fisherman was rescued from a capsized boat by the combined effort of rescue teams of the Indian Air Force, the navy and the coast guard. Photograph: Indian Air Force

Deputy Chief Minister O Panneerselvam is reviewing the situation in Kanyakumari today, he said, adding, ministers for revenue, electricity and fisheries were camping in the district to monitor relief work, he added.

In Kanyakumari, Panneerselvam reviewed the situation with officials and inspected several areas that were badly hit by the cyclone.

Earlier, Panneerselvam told reporters that appropriate relief would be given to the affected people. 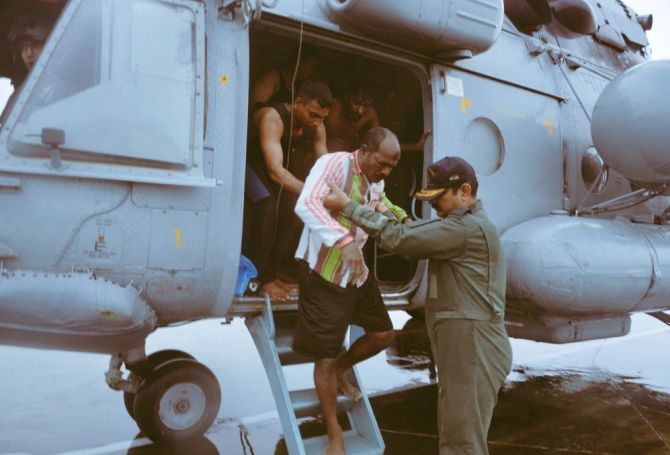 On Saturday, in a tweet, Sitharaman said, "#CycloneOckhi - As of this morning, a total of 89 boats comprising 1,154 fishermen from several states mainly from Kerala and Tamil Nadu have taken shelter in various ports of Karnataka, Maharashtra, Goa & Lakshwadeep."

She had also said, "Factsheet on #CycloneOchki wrt Tamil Nadu-Claim of thousand fishermen stranded is false. #Correctfigures- 97 are yet to be rescued, 71 from TN have been rescued till now. The Coast Guard is at it, with all its strength to rescue the rest. Hoping for good news soon @nsitharaman (sic)."

Meanwhile, relatives of some fishermen who were reportedly stranded in the sea, staged protests in Kanyakumari district seeking steps to rescue them. 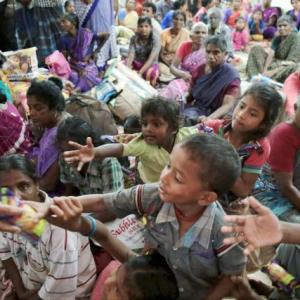